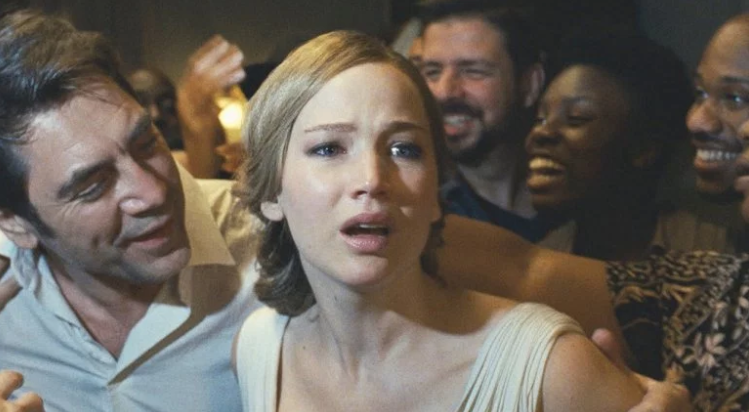 It’s been proven over the last two decades that filmmaker Darren Aronofsky makes movies his own way. He doesn’t bow down to Hollywood execs and never makes movies for the masses. Most people would fail with this tactic, but with Aronofsky, he wins awards and is met with critical acclaim. With films like Pi, Requiem for a Dream, Black Swan, and The Wrestler (I won’t mention Noah) – you can tell that Aronofsky doesn’t make tightly wrapped, happy movies with pretty little bows on them. I commend him for this, because he’s doing something that nobody else is doing.

That brings us to his latest film called mother!, is his most insane movie-to-date. After viewing the film, you might wonder how Aronofsky got a major studio to release the film in thousands of theaters. There is no score in the film and no character names in the movie, but only characters referred to as mother (Jennifer Lawrence), Him (Javier Bardem), and a little later man and wife (Ed Harris and Michelle Pfeiffer respectively). The first shot of the film is a closeup of a bloody and battered women standing in the fire, with what looks like hell behind her, but then transitions into a beautiful, yet creepy old Victorian house where mother and Him live. Him is a successful poet who has a very bad case of writer’s block, while mother fixes up their house by painting and putting up drywall and making food. They have no children and seem to love living in the remote rural area away from everyone and everything.

You can tell by that opening shot that Aronofsky has something sinister lurking behind the corners and that some of his favorite films have influenced him here. There are elements of The Shining, Carrie, and Rosemary’s Baby happening here, but as the film travels along this eerie road, it becomes more confusing on where it will end up. As mother and Him are enjoying a quiet life, a man and wife show up and ask to stay with Him and mother. Their interactions start off on the awkward side and become downright unstable and violent. More people show up to their house where Him doesn’t seem to mind that these people are taking up space in his house and wanting to be near Him and his work, which they think is the gospel. Meanwhile, mother is cleaning up after everyone, fixing broken things, and trying to get everyone out of the house.

It’s a very slow moving film as the camera acts as a ghost behind mother the whole time, watching the horrors she witnesses. With each action, things get creepier until the final twenty minutes of the film, which is where Aronofsky stops holding back on all playing levels. What started out as perhaps a slow horror Kubrick film, then turns into the first twenty minutes of Saving Private Ryan, but instead of storming the beach at Normandy, there are thousands of people storming this Victorian house in the several levels of actual hell. It’s unrelenting, hyper-violent, bloody, and does not even shy away from taboo subjects at all. I have no doubt that this will thrill, offend, and spark heavy conversation on to what the movie is actually about here.

There are many theories on it as Aronofsky never gives you one definitive answer as far as normal narrative films go. On one hand, you can argue that this film is a personal story on the dark side of fame and glory, or on the other hand, it could be a metaphor as to every new mother’s worst nightmare. There are many other interpretations that I have no doubt that people will claim. None will be wrong and none will be right. It can even be argued that this is how Aronofsky sees the world and where it’s going, which is a frightening site indeed.

From what I can tell, Aronofsky threw everything in here, including the kitchen sink, which plays out like a very atmospheric and incredible slow burn horror film, that quickly transitions into a giant shit-show with no time frame at all. There is nothing out there like mother! for sure and even though the film has blazing plot holes and flips itself into very over-the-top territory, it’s still a well-polished movie that will linger with you long after you see it. 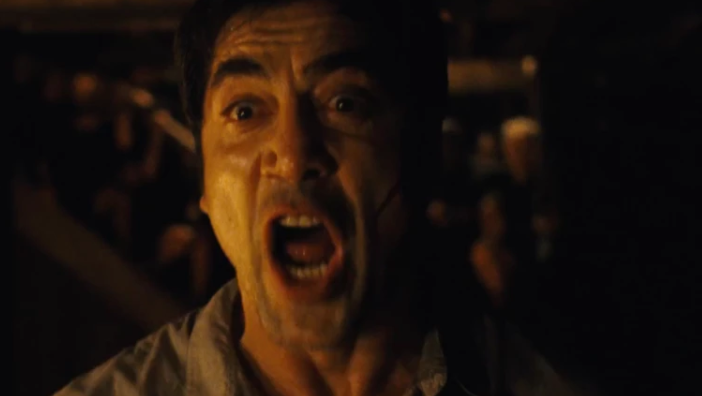 Javier Bardem is great as Him, in making you feel comfortable and down-right scared of him all in the same scene. Ed Harris is always great and Michelle Pfeiffer proves once again that she’s an incredible actress. As for Jennifer Lawrence, she plays a frantic woman, much like Shelley Duvall played in The Shining very well, but it got tiresome. Still, it’s better than most of her work in recent years. If you’re looking for a straight out horror movie, mother! will not deliver what you’re expecting, but it will however brand a new type of horror unlike you’ve ever seen into your brain and heart.