From the creative duo that brought us ‘Klovn’ and ‘Klown‘, comes their next twisted comedy with a ton of heart called ‘Dan Dream‘, that tells the true life story of the world’s first electric car. If you’ve ever had the privilege to watch ‘Klown‘, then you know about the off-beat humor of the Danish team Casper Christensen and Frank Hvam have owned since they stepped into the film world. With their silly bodily humor, they still manage to tell engaging and heart felt stories. Dan Dream is no different and has shades of ‘Little Miss Sunshine‘ throughout. Casper and Frank, who also star in the film, have perfectly captured this small moment in history with all its glory and warts in their unique brand of of comedy that includes butts and poop.

‘Dan Dream‘ takes place in the 1980’s and follows a guy named Thorkil Bonnesen (Casper), who has an idea to make the world’s first electric car. He enlists the help of an odd group of people, including Jens (Hvam) who is a smart engineer, but is not present at home, Vonsil – who is a one-armed mechanic who has a penchant for racist jokes, and Henrik – who is a flamboyant man in charge of the decorations of the car and who also carries around his pet rabbit everywhere. These four guys must now find the finding and the perfect city to make their prototype car and unveil it on the world. They find a small-town, run by an inept mayor and set out to deliver strawberries in their new electric car to the people who said it would never happen. 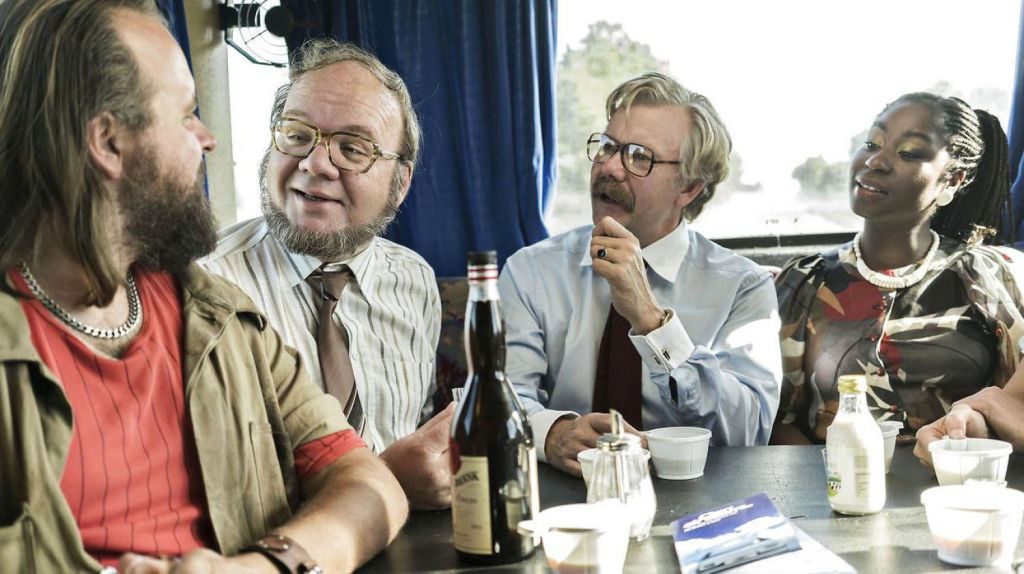 Of course, you can look up to see what really happened, but then that would take the fun out of everything. The script is very genuine and real, as these four men mostly let their personal lives slip away in order to finish this project. Because of this, we see their faults, triumphs, and character arcs that is completely redeeming. There is a sense of accomplishment, loyalty, and love throughout the film that just oozes the best parts of a movie like ‘Little Miss Sunshine‘, but in this case, there is a bit of toilet humor, as when the inept mayor eats raw chicken at a fondue place.

The actors here are brilliant and really drive home their distinct personalities, and although some might be harsh and brutal, you grow to love them, because the characters themselves grow as well. ‘Dan Dream‘ is inspiring and heartwarming from start to finish and  is one of those great true stories told on film.