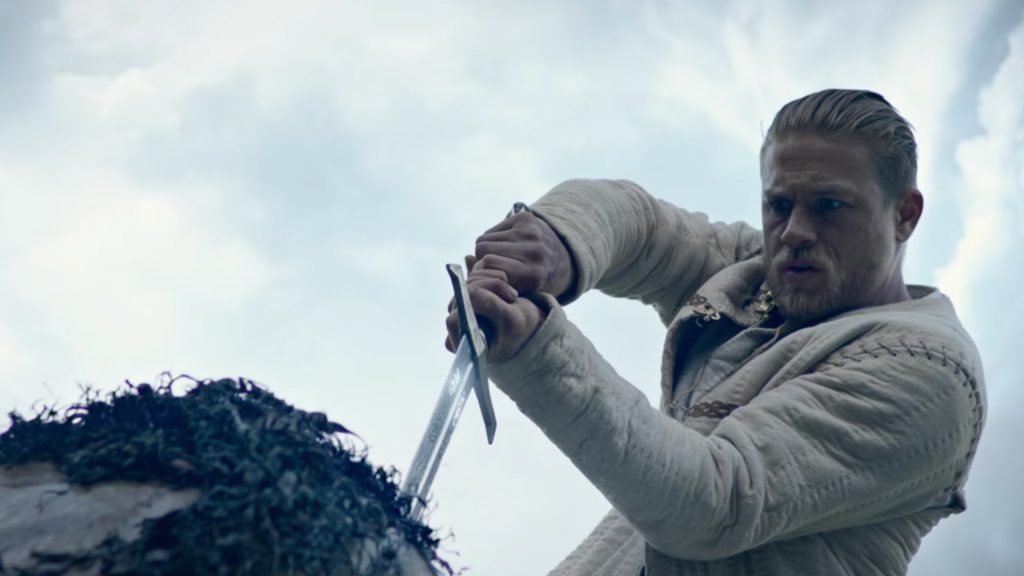 I realize that I am late on this one. I was out of town when it came out and frankly, there were just higher movies on the list I needed to see. Well I got to see King Arthur: Legend of the Sword finally and let me tell you… it is really good. Out of every summer movie this year that I have seen, including Fate of the Furious and Guardians Vol. 2, I left the theater thinking about a sequel to King Arthur the most.

WARNING: From this point forward it will be pretty spoiler heavy!

King Arthur opens with Eric Bana’s Camelot under siege by a dark Mage who can summon beasts and perform all sorts of dark magic to bring about battlefield victories. Eric Bana is Arthur’s Dad and as his castle walls are breached he draws a sword that has a slight blue hue to it and his eyes begin to glow. He enters the dark Mage’s caravan and cuts his head off, saving Camelot. Bana’s brother, Vortigern, played by Jude Law had trained with the Mages as a boy and begins to act strange after the dark Mage is defeated. A short time later while Arthur is still young, Vortigern stages a coup using dark magic to take over Camelot and in the process kills Arthur’s mother and father in front of him. Arthur escapes in a boat like Moses and is found by whores then gets raised in a brothel. 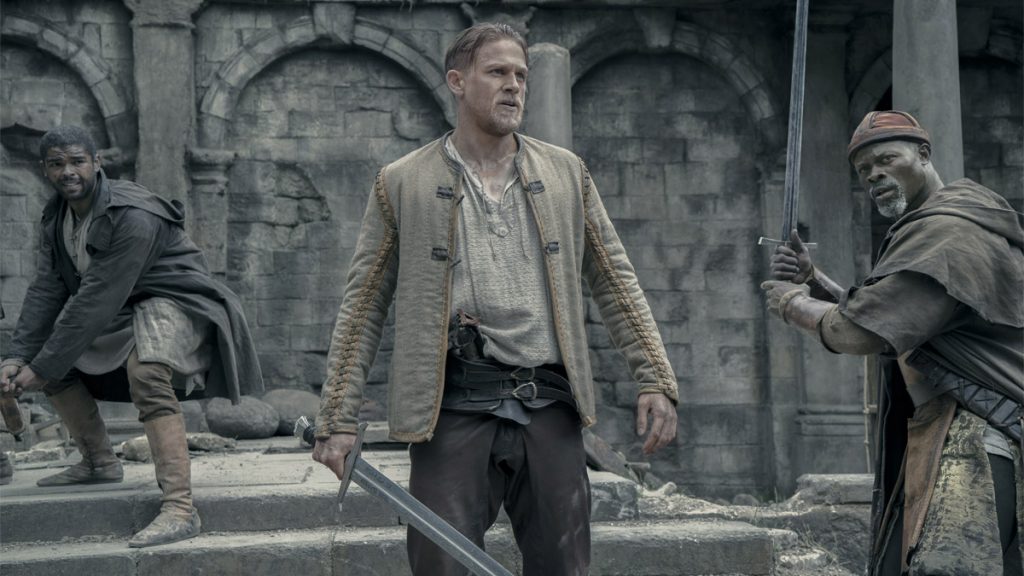 Here is where Guy Ritchie really shined, he turned Arthur growing up into a street wise, tough protector into a classic Ritchie montage. We see his progress from small boy all the way to Charlie Hunnam as a full grown Arthur. It takes 3 minutes but skips over all the tired plot cliches we know with these stories and gets us back to the action. From there we learn the sword has revealed itself and Vortigern is rounding up all the men approximately Arthur’s age. Arthur eventually pulls the sword from the stone but not before a fantastic sequence from Ritchie recalling Arthur’s morning. A local law man comes to ask Arthur and his crew some questions about a morning attack.  In one of the film’s highlights the morning’s activities are done with quick edits and narration, with characters asking to back up, speed up, or add in things the other forgot. It sounds dizzying but it is executed perfectly and serves two purposes. One it is very funny. Two is gives you insight into the relationship of Arthur’s crew and gets you to buy into them immediately.

The overall rest of the plot is just like the trailers. Arthur is realizing his destiny and learning to wield the sword’s power as Vortigern searches for him. It is the way in which these typical fantasy film beats are handled that set this movie above others. A journey to the ‘Darklands’ to face beasts and place the sword on some ancient rock so that he can become one with it would be a 30 minute sequence in any other fantasy film. Ritchie nails how to handle these things and all origin story films need to take notes… he montages it in a fun and brutal manner. As Bedivere (Dijimon Hounsou) and The Mage, who both help Arthur escape Vortigern’s attempt to kill Arthur, discuss how he is not ready for the ‘Darklands’ and what he needs to do there we actually see Arthur in the ‘Darklands’. The voice overs and brief scenes of two characters discussing why it is a bad idea for him to go there and why he must are intercut with Arthur actually in the ‘Darklands’ fighting terrifying creatures and making his way up a mountain. This isn’t the large character defining destiny moment so instead of having 4 scenes of Arthur attempting or rejecting his birthright, Ritchie chooses to portray a 30 minute creature filled, fight, and journey in any other movie in a quick beautiful 5 minute scene that gets its point across just as effectively.

Choices like that are what made this movie so wonderful. It wasn’t that I hadn’t seen every story beat of the ‘Hero’s Journey’ done before. It was the way in which Ritchie decided to portray it. This movie expects the audience to be smart and respects their ability to know where the movie is going. When Vortigern can suddenly wield fire in his hand after completing another level to his Mage Tower, it isn’t a shock when 20 minutes later the characters discuss the need to knock the tower down to make him lose his powers. The movie and Ritchie KNOW that the audience can figure out why it is important for Arthur to accept the sword but they never have a character spend 3 minutes giving a history lesson of how the sword was made or why its so powerful other than to say it was made by Merlin. Show don’t tell, isn’t done enough in Hollywood anymore. This movie chose to show us the tale of King Arthur in a new fashion and I loved it for that.

This is the Batman Begins of King Arthur’s tale. He accepts his destiny, has a small inner circle, and defeats the bad guy to take back Camelot. We don’t meet any of the other main characters from King Arthur lore. No Merlin or Lancelot. I don’t suppose we ever will meet this either since this movie bombed so bad but the bones are there for what had potential to be a really great film franchise. I don’t know what could’ve been done beyond casting a bigger lead as Arthur to get people in the seats but I respect the hell out of everyone who made this movie the way they did it and hopefully some other established franchises can learn a thing or two about portraying heroes on film in a new fun manner.

Try and catch this one before it leaves theaters. It is a refreshing take and will guide the way I watch some of these origin stories going forward.