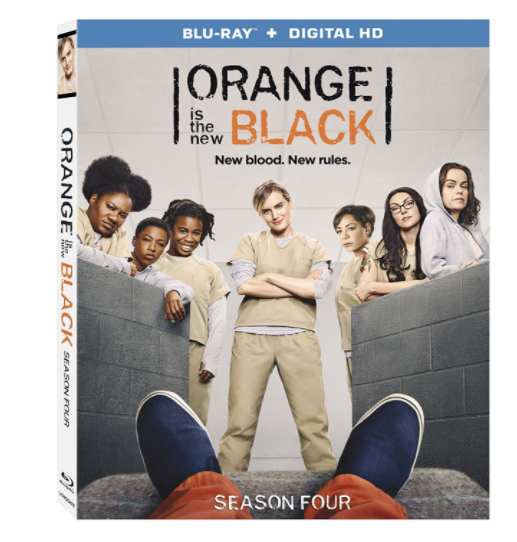 In the past, Orange is the New Black has developed a darkly comic and often tragic story with their series over the past few seasons, and this fourth season is no different, although it would seem things are more on the comedy side this time around than unhappy faces at the women’s prison. The show’s writers and producers can certainly weave current politics and social issues in to the show with ease in each character, but with season four, it seems like certain plot points are over-the-top.

As the series has played out, we’ve seen less and less of the main protagonist Piper Chapman, who was the upperclass woman who was sentenced to prison for a couple of years, because of her affiliation with her lesbian lover’s drug trade. Chapman is more or less a background character now, especially in Season 4. In the first season, we see the prison through her eyes, as everyone of the inmates seems scary, mean, and violent. As the series progresses, the opposite is true in the form of flashbacks through a ton of the characters, as we see them in their earlier lives and how they got to prison.

Their stories are tragic and heartwarming at the same time, with Chapman being thrown on the back-burner with a negative light. In season 4, we see the women enjoying that break in the security fence as they frolic and feel the coolness of the lake by the prison. This temporary moment of happiness is short lived as new inmates come to an already over-crowded prison where tensions flare. On top of that, the new security staff only make life worse for these inmates. In what seems to be a more serious angle, but comes across as highly comic is when a henchman infiltrates the prison to execute one of the prisoners. It’s highly laughable an d plays a big part of several episodes.

There are for sure some extremely suspenseful situations here, some of which have dire consequences and can easily be related to real life, especially in this current political and social climate. Most of the time, the writing and story navigate these genres well, but sometimes they can become silly, with perhaps a hint of a shark being jumped over at some point. I just hope things get back to basics, because this show has enough amazing characters that it doesn’t have to push the bounds or try to get a rise. It will just come naturally like in the first two seasons. Still, this season is a solid one and for sure ends on a cliff hanger, which was rather ridiculous, but it leaves you wanting to see what happened. I just hope we don’t have another Walking Dead finale situation on out hands. 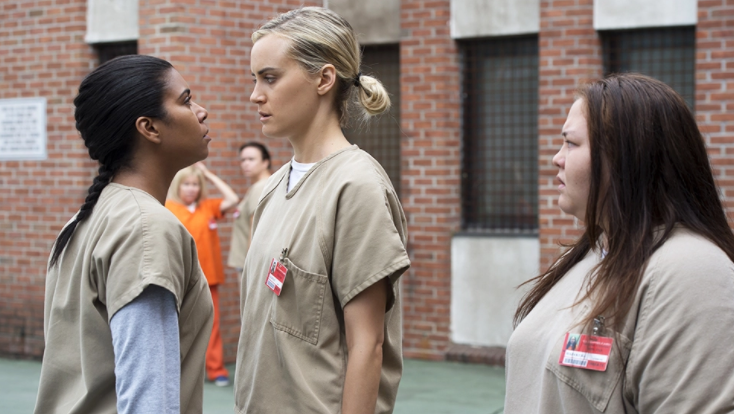 The Video: Orange is the New Black Season 4 comes with a good 1080p HD transfer and is presented in 1.78:1 aspect ratio. Falling in line with previous seasons of the show, the detail and color are very good, but has some minor problems here and there. Detail is sharp and vivid throughout with great closeups that showcase moles, individual facial hairs, freckles, and makeup blemishes quite nicely. Threads in the inmates uniforms can be seen nicely too. The textures of the stone walls and bars show up nicely where you can see imperfections in the bricks and stone.

Wider shots don’t usually go soft either, however softness shows up in darker scenes, but more on that in a second. Colors look great and well balanced when outside the prison. The blues skies, green grass and colorful garden look exquisite. Luckily, a lot of the fourth season takes place outside, so the colors mostly pop off screen. When inside the prison, colors are neutral and vague, with the exception of Red’s hair or the rare orange inmate uniform. Black levels are mostly deep and inky, however there was some crush bleeding blacks that transferred over, giving a softer look as I described above. Skin tones are natural and smooth and there are no major problems with any banding, aliasing, or tons of video noise. This is a good video presentation.

The Audio: This release comes with a solid lossless DTS-HD MA 5.1 mix and does a great job with the surrounds throughout each episode. Sound effects are realistic, loud, and robust, but never overly done to make things sound silly. Inmates banging on the walls, or using garden tools to dig, or even kitchen sounds, all sound great. The sound design really kicks off in the cafeteria or when there is a big confrontation with many inmates, as we’ve seen a few times in this season.

Many screaming voices of all volumes can be hears as if they were standing around you, making this an immersive experience. The low end comes into play in these scenes, but nothing much else. Dialogue is crystal clear and easy to follow, and free of any pops, cracks, hiss, and shrills. Ambient noises of city sounds in flashbacks or other inmates chattering sound great too. This is a great audio presentation. 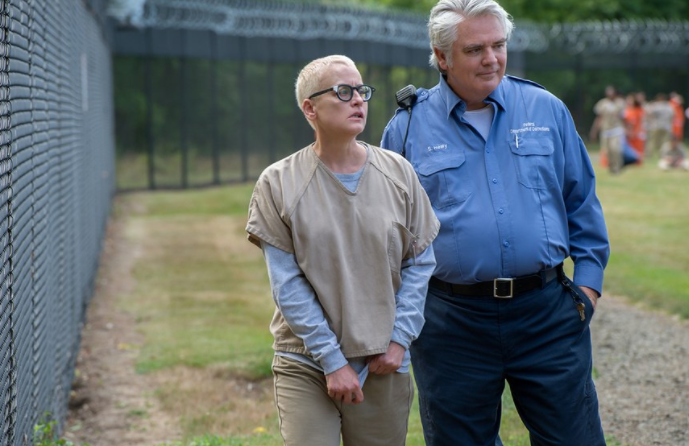 Audio Commentary – There are three different audio track on three episodes with some of the writers, producers, and two actress, being Lori Petty (Lolly) and Samira Wiley (Poussey). These are worth listening to if you like the show as they talk about the story, characters, and tone of the series.

Visitation: Set Tour (HD, 10 Mins.) – The art director and production designer discuss and take you on a tour of the many sets and locations used to film the show. 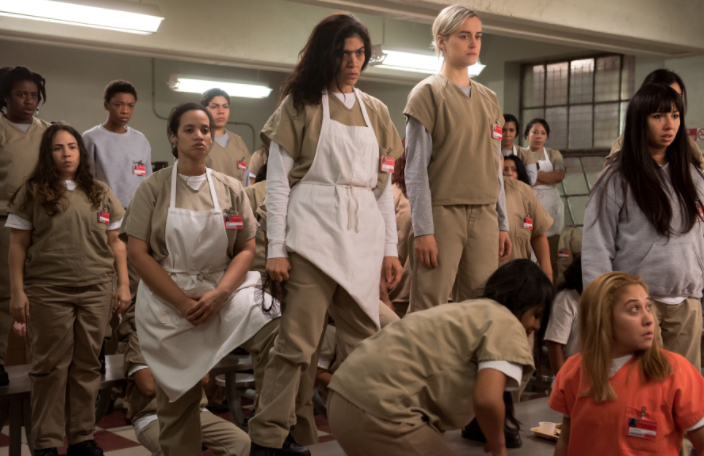 Orange is the New Black is a great show. This fourth season isn’t the best of the series, but it still has some great moments. I just hope the silliness of the show will not outweigh the great writing and drama that series has shown thus far. The video and audio presentations are both good and the couple of extras are decent enough. There just isn’t that much to it. Being available on Netflix, it’s hard to recommend you to spend money on something that you’re basically already paying for. The commentaries are great, but it’s not worth the price tag. If you don’t have Netflix, then this show comes Recommended!