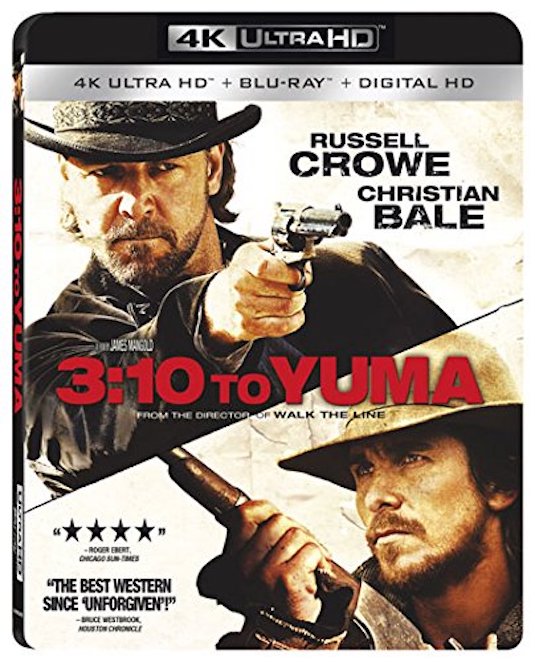 Filmmaker James Mangold has certainly made a name for himself in the Western genre of cinema with the likes of 3:10 To Yuma and more recently Logan. The guy knows how to tell a thrilling story set in the old west as we’ve seen before. Prior to this 2007 version of the film, author Elmore Leonard (Jackie Brown, Get Shorty), wrote a short story, which was adapted into a 1957 film called 3:10 To Yuma. Mangold thought it would serve as a great remake in these modern times and he wasn’t wrong, while he added a few new story conflicts to this great 2007 version.

What I imagine these filmmakers and writers had in mind is that the two main leads in this story, Dan Evans and Ben Wade (Christian Bale and Russell Crowe respectively), come to respect one another, while being totally opposite from each other. Evans is a family man who tries to keep a hold of his farm, while Wade is a cold, murderous outlaw, robbing his way across the country. We want to sympathize with both men equally, which is what Mangold tries to do here, and he mostly succeeds with the exception of some cheesy lines and action scenes here and there.

Most of the film though, plays out with high thrills and beauty stretched across the New Mexico landscape. The story follows Evans (Bale), as a ruthless businessman sets fire to his barn, disturbing his livestock in order to buy out Evans’s land from under him. Evans and his sons try to capture the livestock again so they can survive another month or so to take care of their family, when they come across Wade (Crowe) and his outlaw posse, savagely rob a stagecoach. Wade in fact spots Evans and his kids witness this crime, but does nothing about it, seeing as Evans just wants to retrieve his livestock.

This is the first example where we see Wade’s more sensitive side, as he sees some sort of honor in Evans, just trying to provide for his family. Soon enough, the marshals catch up and make a deal with Evans to capture and take Wade to prison by way of the 3:10 afternoon train to Yuma. Evans agrees to this mission for a sum of money, which puts Wade and Evans on a journey together to the train station. After escape attempts and trying to avoid other captors, Wade and Evans develop and odd relationship where they of course hate each other, but respect each other.

It’s great to see this transition unfold on screen with everyone’s performance and Mangold’s beautiful direction. The original 1957 film tried to put a pretty little bow on everything at the end, but with Mangold’s version, things are bit dire, especially from the start of the film, which plays out more realistically. 3:10 To Yuma is one of those brilliant character pieces set in the old West where two unlikely people can develop respect and admiration for one another. Plus, the gun fight scenes are brilliant and violent from start to finish. 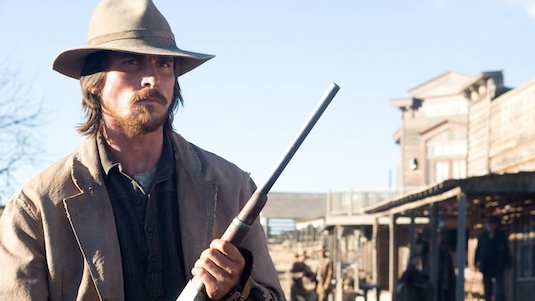 Needless to say, this 4K UHD Disc is a great upgrade from the previous Blu-ray version, but it’s not the biggest upgrade you’ve ever seen. That being said, it’s worth the purchase. Detail in closeups look sharper with individual facial hairs showing up nicely and the dirt and grim showing up on the wardrobe. Wooden buildings and rocks showcase their imperfections just fine as well. There were some shots that looked softer throughout though, making this not thoroughly sharp all the way through. There is a great level of grain, which keeps the filmic look in tact her too.

The big uptick is with the HDR10, boosting colors brightly that pop off screen. The look of the image is rather warm with tons of browns, oranges, and yellow, but hey, that’s the old west, right? Each color is well balanced and saturated throughout, along with some great primary colors such as blue skies and green shrubs. It all mixes very well, although it looks like there was a warmer filter added in certain scenes. Black levels are deep and inky and the skin tones are always natural. There were no major instances of any banding, aliasing, or video noise, leaving this video presentation with good marks, but not excellent. Still worth the upgrade.

The Audio: The previous release had a great LPCM 7.1 audio mix, but this 4K UHD comes with a stunning DTS:X option and just blows the house down. Each of the bigger sounds are more nuanced and detail and have a bigger heft and punch to it. Sound effects are loud, robust, and fully immersive in this soundscape with gun fire packing that low end punch with bass with every shot. There is great directionality here too as multiple shots are fired from a variety of areas, which might cause you too look around your viewing room for the nasty culprit.

Explosions of wood and glass sound incredible here too and feels like it’s raining down upon you from above, thanks to the DTS:X sound. Ambient noises of the wind blowing and shrubs whistling in the wind are full and spectacular and feel the soundscape with a natural environment. The score always adds to the suspense of the film and the dialogue is always crystal clear and easy to follow along with, and free of any pops, cracks, hiss, or shrills. This is an excellent audio presentation if you love gun fights. 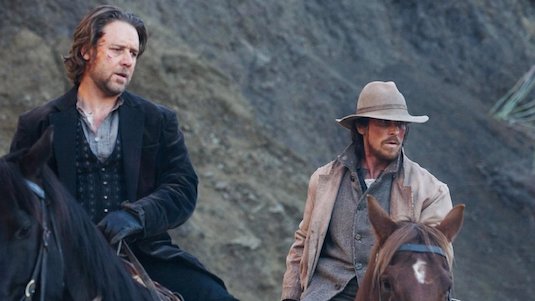 There are no new extras on the 4K UHD disc, but the previous extras have been imported over here and are as follows:

Audio Commentary – Filmmaker James Mangold discusses making the film, why he chose this project, the casting, performances, technical details, anecdotes from the set, and the themes and tones of the film vs the original movie. Great listen.

Inside Yuma – This is a picture-in-picture mode that has videos and storyboards and interviews popping up while watching the film on how they made it. If you’re a fan, you’re gonna like this.

Historical Timeline of the West – This is a cool interactive text display where you can read about the events of the 19th century.

Destination: Yuma (HD, 21 Mins.) – A decent promo reel for the making of the film, with cast and crew interviews, as well as some behind the scenes footage.

From Sea to Shining Sea (HD, 20 Mins.) – Here is looks and talk about the construction and history of the railroad.

Outlaws, Gangs, and Posses (HD, 13 Mins.) – A few history experts talk about the different factions and ways of life in the Old West.

3:10 to Score (HD, 8 Mins.) – Marco Beltrami discusses his work on the music of the movie and what inspired him to create it.

An Epic Explored (HD, 7 Mins.) – Jame Mangold is back to discuss his love and influences in the Western genre.

A Conversation with Elmore Leonard (HD, 6 Mins.) – This amazing author discusses his career, life, and work on the film.

The Guns of Yuma (HD, 6 Mins.) – This details all of the guns used in the film, how they were made, and what part in history they played.

Deleted Scenes (HD, 8 Mins.) – There are seven deleted scenes, all of  which are worth a look.

3:10 To Yuma is on hell of a remake. The performances, direction, dialogue, and story are all stunning and fantastic. It’s one of the best modern westerns to date. Coming in with a 4K UHD upgrade, the image looks great and the new DTS:X sound is fantastic. No new extras, but the prior ones have been imported here, along with a standard Blu-ray copy and a digital download. This is definitely worth the upgrade if you love the film.