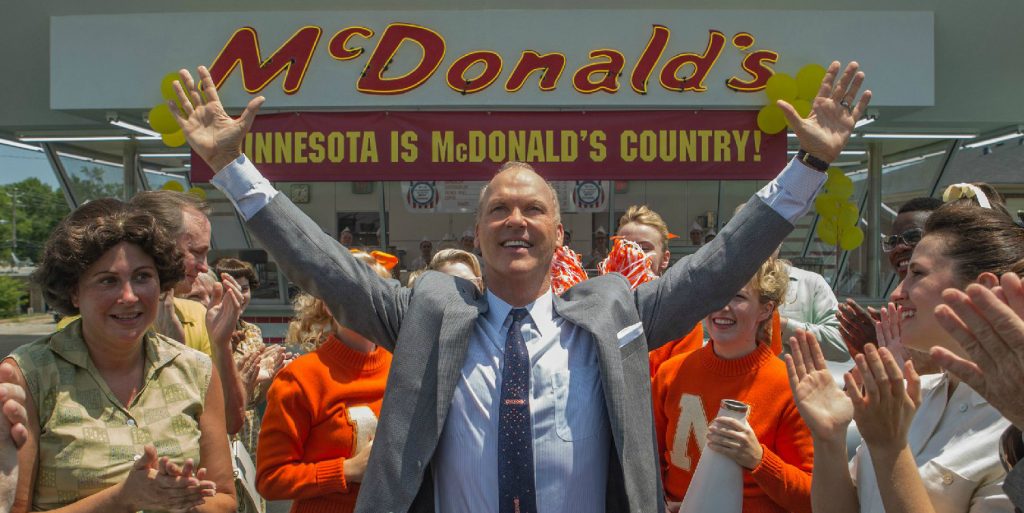 As a lawyer, one of the first things they teach you is to always put things in writing. As a criminal lawyer, one of the first things I tell people is never put things in writing. ‘The Founder‘ is a lesson in contracts and how as Roy Kroc says, “Contracts are like hearts, they were made to be broken.” This film explores the story of how McDonalds became more than just a local burger joint- exploding onto the map as a nationwide franchise. Quite honestly, it was darker than I expected, and cast a bit of a cloud on the French fried potato goodness that is Micky D’s, but I suppose that when you pull back the curtain and expose the inner workings of any organization, you are bound to find a few skeletons in the closet.

Michael Keaton’s performance as traveling salesman, Roy Kroc, was impeccable. I imagine that in the 1950s many men were in his shoes: trying their best to pitch their newest product to anyone that would listen. And most of the time they were shut down, just like Roy. Sales has always been a tough profession, but imagine doing it out of your car and peddling products that most people don’t see any use for, like a five spindle milkshake machine. Kroc leaves his wife at home (played by Laura Dern) to travel and sell the next best thing, again and again and again. It’s clear that the first thing to sell out is their marriage. All he wants is her support in his dreams of making it big and all she wants is a normal life.

Things take a turn when Ray receives a rather large order from a company called McDonald’s out on the west coast. Not believing this could be real, he drives out there to see it for himself. The film does a great job of capturing the time- when people stopped just going to drive-ins and started being introduced to “fast food.” The scene where Roy orders from a walk up window and is handed a bag of food is perfectly acted. As he takes it all in he’s introduced to the owners of the outfit, Dick and Mac McDonald (Nick Offerman and John Carroll Lynch). The two brothers are owners of the restaurant and have created it from nothing. Roy is captivated by their story, and as a viewer, you will be, too.

Offerman and Lynch are the heart of the film. They add humor and warmth to the piece. The brothers are truly amazing, and it’s a shame that their story is not better known. I imagine that writer Robert Siegel and director John Lee Hancock sought to change that with the film. Both actors do a superb job of bringing their personas to life. Playing on their warmth, Keaton offers the edge. He rubs people the wrong way, he pushes back, and his drive for success ends up negatively affecting the relationships that got him into the prime position.

Overall, it was a very interesting look at how a billion dollar company started in a single parking lot on the shoulders of two men. It’s disheartening to see how betrayal played such a big part in the corporation, but I imagine when creating an empire there are bound to be few bridges burned. Just don’t burn the fries.