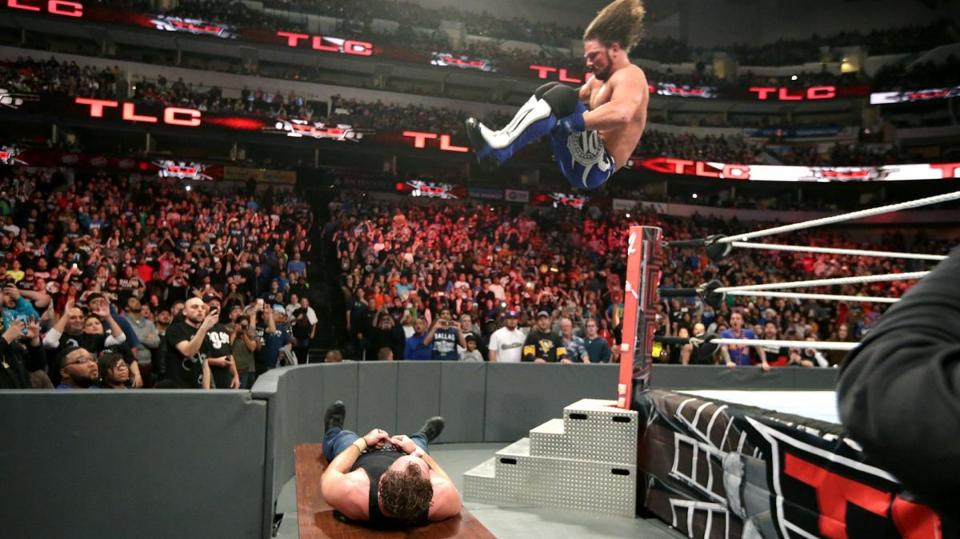 WWE has just finished its 8th TLC pay-per-view right here in Dallas, TX. No, TLC does not mean Tender Loving Care or even the R&B group from the 90s. It stands for Tables-Ladders-Chairs and is considered the “hardcore” PPV of the year for WWE. This was a Smackdown Live brand PPV event where every championship title was on the line. Between chair matches, ladder matches, table matches, and an all-encompassing TLC match to end the night, it’s no doubt that each and every superstar will be sore for next few days after all of their bodies were flung into these steel and wooden pieces of furniture. The event took place at American Airlines Center in Dallas, TX to a big crowd, however it was far from a sell-out. That didn’t stop the crowd from cheering and booing their favorite superstars at all, even though it wasn’t as crazy a crowd as ‘Wrestlemania 32‘.

Before the actual PPV started, there was a PRE-SHOW match that consisted of a 10 men tag team match. This is classic good vs evil here with The Hype Bros (a team that is hyped and yelling about every thing, including waffles and wipped cream) and American Alpha (perhaps the best tag team ever created who can legit kill anyone), along with Apollo Crews (much like Apollo Creed but happier and bigger)  who take on The Vaudevillains (a 1920’s vaudeville act with glorious mustaches), The Ascension (two dudes who look like they came out of a middle ages God of War game, and Curt Hawkins (a dude who compares himself to Chuck Norris).

It was a chaotic match with the final minutes having everyone do their finishing move one right after the other. It got the crowd hyped up with American Alpha landing their finishing move and wining the match for themselves and the team. Solid talent all around and I hope American Alpha soon gets their big push up the ranks on the main card soon. Also, Zack Ryder won the Intercontinental Championship at Wrestlemania 32, only to hold it for less than 24 hours. Now, he is doing Pre-Show matches. Sad face. Apollo Crews is so excellent, but he has no character or direction. This needs to change. He needs a character. Everything else is there. Curt Hawkins just needs to embrace the Chuck Norris wardrobe and style and sell it. 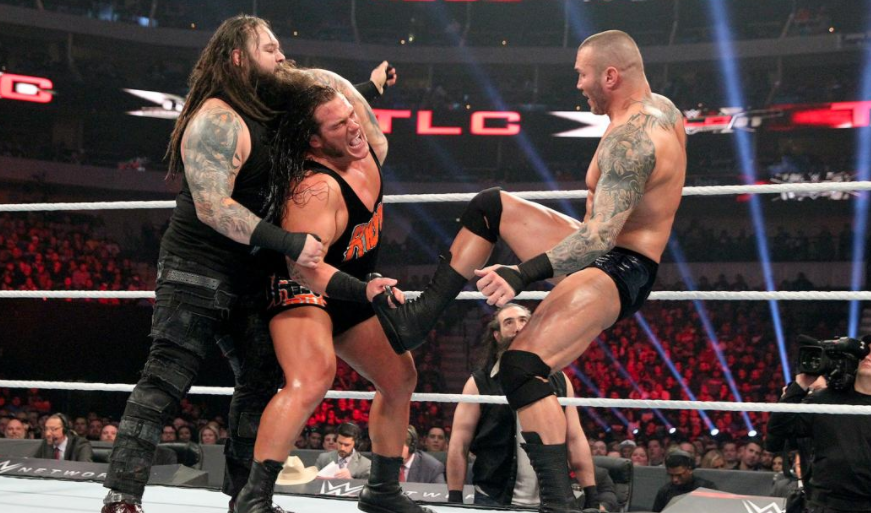 The first match on the main card was the Tag Team Champion match, which only lasted less than six minutes. This is exactly how it should have happened. Yes it was predictable, but it was the right course. Slater and Rhyno have had a good run of being over with the crowd and the WWE universe, but it was time to lose the tag team belts. Randy Orton and Bray Wyatt are top tier talent and they have the potential to be the biggest faces in the company if WWE creative writes it well.

Rhyno is getting up there in years while Heath Slater is still damn good and wins over the crowd. I can see these two becoming solo wrestlers in the near future or trying to win back the tag team titles, which definitely won’t happen. Still, it was a fun short match with Orton delivering the RKO nicely and Luke Harper sacrificing himself for the greater good of the family by taking a spear from Rhyno. It’s the only spear I like in the WWE right now. 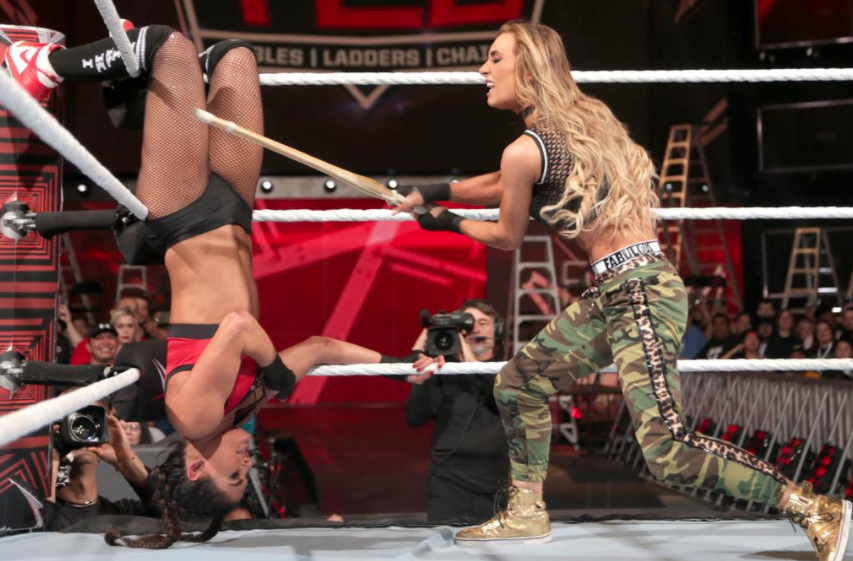 Nikki Bella of the Bella twins (and John Cena’s true love in real life) is back in the ring, kicking ass and taking names after her hardcore neck surgery. This match had no stipulation really and no title was up for grabs, but was to show the further feud between Bella and Carmella. There were some good spots, a good in ring story and Nikki showed that she is still top dog for the most part here. Carmella is a great in ring performer, but her character just isn’t sticking right these days. I like the moonwalking of course, but the Jersey Shore thing is a little too much of Enzo and Cass from RAW, but not as fun. Still, a solid match without Tables, Ladders, and chairs. 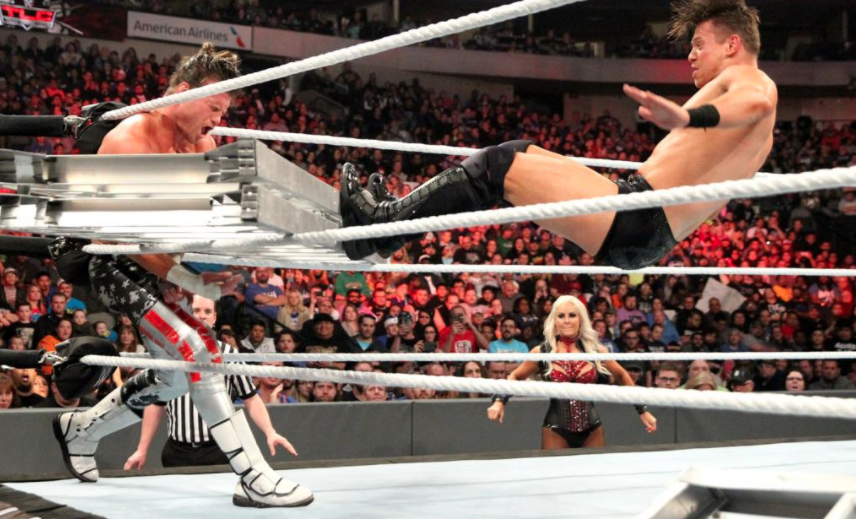 Mike The Miz and Dolph Ziggler had a ladder match for the intercontinental championship. AGAIN. This feud has not died yet and it needs to in the worst way. Supposedly, this was the last fight between the two, but who knows. The Miz is the best HEEL superstar right now. He knows how to get under people’s skin, including the audience and Smackdown Live’s GM Daniel Bryan. He taunts, talks smack, and cheats his way to the top and is such a great character that you love to boo and cheer for him all at the same time.

Then there is Dolph Ziggler, who people love, but his character and story have gone nowhere for so long now that he has become stale and stagnate. Sure, he won the title once for a couple of weeks, but it went straight back to The Miz. The story has to end now. Do a trade with RAW and send Ziggler over there and Smackdown Live can get Cesaro or Sami Zayn. This needs to happen for good tv. That all being said, this ladder match was top notch. Both superstars flung their bodies all over the place in order to climb that tall ladder and grab that championship belt. There were tons of false count outs that had everyone on the edge of their seats, but The Miz took the easy way out and kicked Ziggler in the balls twice to win.

This was a legal move in this match, but the pussy way out. This went into the ‘Talking Smack’  episode, where Daniel Bryan and The Miz got into yet another heated argument on camera, which has people talking about Daniel Bryan coming back for one more match at Wrestlemania 33 to face the Miz. I will do separate article on this rumor for sure so stay tuned. 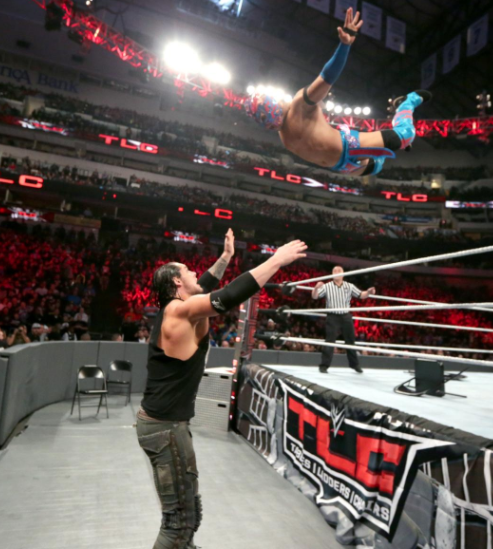 No title or championship was up for grabs here, but that didn’t stop the match from being surprisingly entertaining. I say surprisingly, because this was strictly a chair match. Yes, just chairs. Unless you’re constantly hitting your opponent with flying chairs to the nuts and face, usually these matches aren’t that fun, but Kalisto and Baron Corbin made it entertaining. Kalisto is a 5’6 superstar that weighs 170 pounds who can fly high of the ropes while doing multiple flips. Corbin is a 6’8 275 pound giant who eats Kalistos for breakfast. Kalisto put up a good fight and there were some fun high flying moves with chairs, but of course Corbin defeated Kalisto. I don’t understand the storyline yet with Corbin other than that he is a lone wolf, doesn’t like anyone, and wants to destroy everyone by himself. So far, he’s doing a good job. 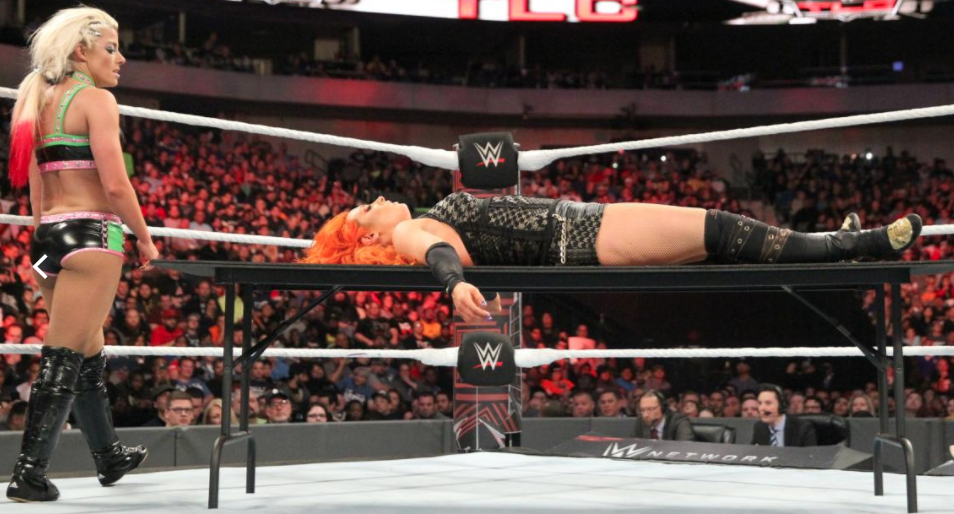 This match was for the Smackdown Women’s Championship as Becky Lynch has had the title since it came into play. Becky is everyone’s favorite wrestler now with all of her steampunk styles and fire moves, but it wasn’t enough for the Harley Quinn look-a-like Alexa Bliss in this tables match. Yes, a tables match where you win the match by throwing your opponent thru a table. Bliss is a newbie to the company and it’s great to see her push and win to the top of the card, but she still has much to learn.

Still, we need a heel champion right now in the women’s category and this is the perfect way to do it and see Becky fight her way to the top again. The match was a lot of fun with great spots from these two women, even if the crowd was a bit tired by this point. The match ended abruptly in my opinion, but the message was delivered loud and clear and now reigns Alexa Bliss. I don’t see anyone taking this from her anytime soon. 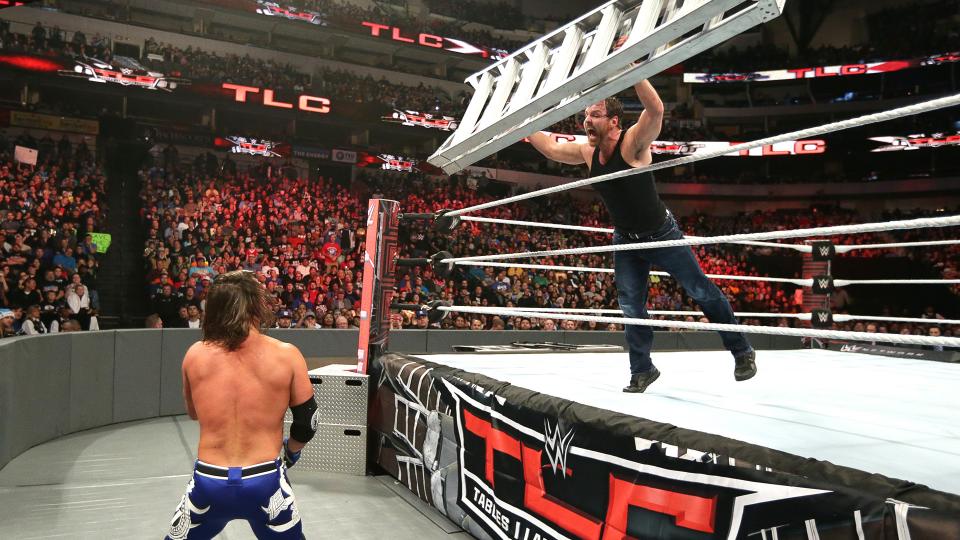