Many movies are cast with celebrities who bring fans into the theater. Arrival boasts a very distinguished cast, including Amy Adams, Jeremy Renner and Forest Whitaker. All three give award-worthy performances. However, what makes Director Denis Villeneuve’s film so special is that he makes the story the biggest star of the film.

Alien ships have landed at numerous locations around the globe. Nobody can decipher their native tongue, making communication impossible. Are these visitors friends or foes? Colonel Weber (Whitaker) is in charge of the U.S. site and recruits linguist Dr. Louise Banks (Adams) and astrophysicist Ian Donnelly (Renner) to help determine what the creature’s true motives are.

The alien concept may sound familiar, but don’t be fooled. The exploration undertaken in this film is quite unique. Writers Eric Heisserer and Ted Chiang tell a story that jumps from past to present and uses both timelines to unravel the mystery. As we learn about Banks’ backstory, the linguistic expert teaches viewers about language and how the basic words we use have greater meaning and can reveal a society’s culture and core values. 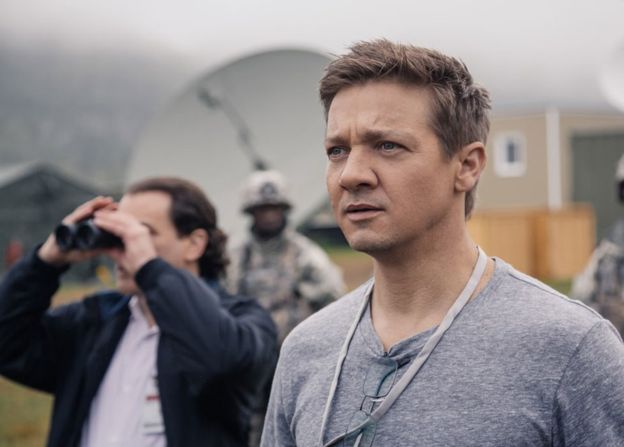 Donnelly assists with the communication and helps break down the barriers. The chemistry between the actors is apparent. Adams and Renner worked together in American Hustle and seem to have a dialogue between them even when few words are spoken.

Arrival’s one misstep occurs during a “news-type” segment in the middle. Villeneuve is able to use this technique to explain the time gap and further the plot, but it feels out of place and disruptive to the otherwise smooth and rhythmic flow of the film.

This is one of the year’s top movies and one that should be seen on the big screen.