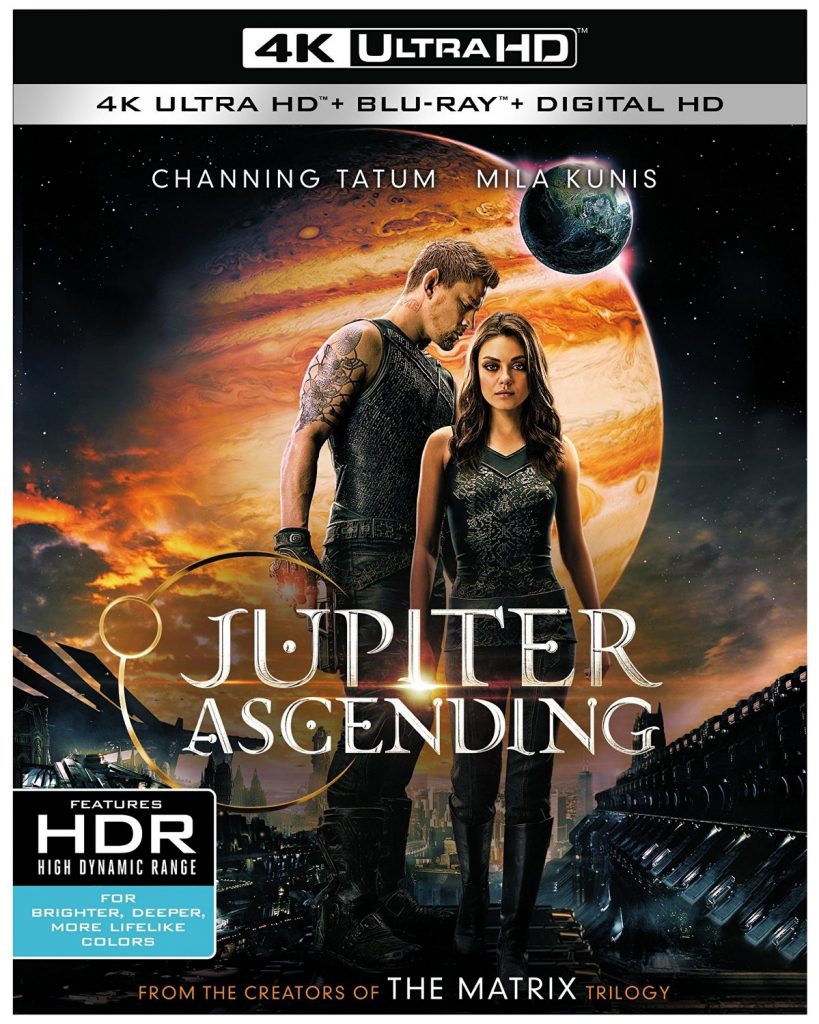 This film review portion was written by Janet White of Boomstick Comics.

Everyday beginning at 4:45am and ending long after sunset, Jupiter Jones (Mila Kunis), a maid, lives the same day over and over.  Alongside Jupiter’s family, she cleans and cleans and cleans. Jupiter wants more, but she sees no end to her humdrum existence.  She hates her life.  Her future and her past are coming for her.

I know that is not much of a setup, but of the small amount of information presented, that is all that seemed relevant.  The story’s relevant background was not explained well, fragments popped up here and there but still left you wanting.  Many holes were left sparsely filled.

In addition, Jupiter Ascending has a mess of gratuitous chase explosions, cloaking, portal jumping, and other space effects.  I’ve said it before and I’ll say it again, too many special effects can deter from the story and confuse the plot.  The genre is sci-fi fantasy, so special effects are to be expected, but less is more.  Also, the actions were paced too fast.  At times, it was difficult to see what was happening to the leads for all the clutter of cinematographic illusions.  However the abundance of special effects in Jupiter Ascending seem in part to cover-up for the bad acting and poor plot structure.  Written and directed by the infamous Wachowskis, Andy and Lana, Jupiter Ascending was a good idea, but was poorly executed.  The Wachowskis too heavily relied on their Matrix tricks.  I spotted an extreme close-up back bend, a scorpion kick, the transformation of humans into a life-giving commodity, and a fighting scene against a swarm of killing machines. Sound familiar?  The plot was redundant at times as well.  I caught myself wondering, “Didn’t I just see this same scenario play out 15 minutes ago?”

I can appreciate the handsome creation that is Channing Tatum (even with the weird hair). As was evident in Step Up, Magic Mike, even Foxcatcher, Tatum possesses great flexibility and wicked flips and tricks, which were well utilized in Jupiter Ascending.  Although Tatum’s athleticism and strength as well as looks, made him ideal for the role of Caine Wise, the character didn’t give him much to work with.  Mila Kunis, although she had the lead role, seemed more like a momentary love interest diversion.  Jupiter Jones is a little girl full of naivety and boy crazy urges.  Kunis’ Jupiter is Jackie Burkhart (That 70s Show) meets Rachel Jansen (Forgetting Sarah Marshall) meets Jamie (Friends with Benefits).  I would have rather seen Kunis’ devious chick with fire, Lily (Black Swan), in this role. She would have been a stronger and less boring presence for sure.

I was disappointed by the performance of Eddie Redmayne.  After an amazing interpretation of Stephen Hawking in The Theory of Everything, Redmayne comes off as weak in Jupiter Ascending in the role of Lord Balem Abrasax.  Redmayne’s portrayal is an anorexic Godfather wannabe and not even slightly menacing villain.  Although some of his lines were either mumbled or covered with the volume of the score, Sean Bean (Stinger Apini) is always a good addition to any cast.  A wonderful surprise was to see one of my Bollywood favorites, Ramon Tikaram, as the peripheral character Phylo Percadium.  I hope to see him in more Hollywood movies.  I don’t know much about Douglas Booth, but he is indeed a cutie and played his small role as Lord Titus Abrasax well.

Overall, Jupiter Ascending was a disappointment.  The graphics and special effects were cool (one in particular reminded me of the 80s film Gleaming the Cube’s opening credits).  Tatum’s acrobatics helped keep the film somewhat interesting.  However, I think they dropped the ball with the story and plot.  The story had great potential, but the film needed slowing down and further elaboration.  For example, why the random yellow colored eye transitions?  They weren’t associated with emotion or senses as far as could be distinguished.  If you don’t mind holes in the story and are willing to settle for explosions, cool tricks, and to look at fine Channing Tatum, go watch this film. 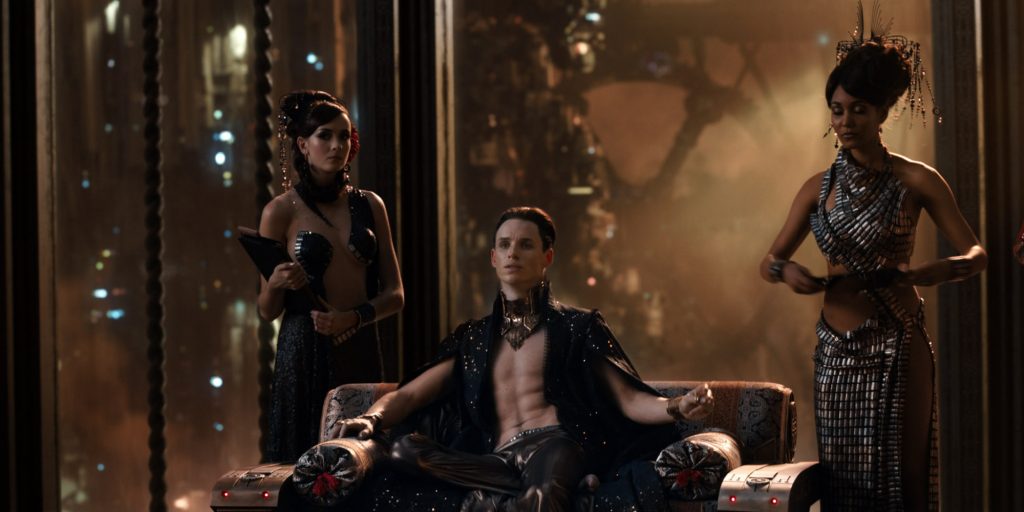 Warner Bros ascends to Jupiter with the 4K UHD release of ‘Jupiter Ascending‘, which has a HEVC H.265 encode in HDR10 with a 2.40:1 aspect ratio. This release has a digital download code as well as the standard Blu-ray version, in addition to the 4K disc. There is no 3D option here. There is an ever so slight upgrade with this 4K UHD from the standard Blu-ray version, which is in 2160p. Detail is very sharp and vivid throughout the many planets and lighting conditions in this film.

The spacecrafts, wardrobe, and visual effects look great, along with the different planetary systems and landscapes. There isn’t a big upgrade, detail wise, but there is a small difference. Colors are well balanced and nuanced in different lighting conditions here. The skin tones look excellent and black levels look deep and inky always. Bigger action sequences showcase all of the different colors from explosions as well as the debris flying through the air, which is nice. Again, there isn’t any major upgrade, visually speaking here, only very slightly. I did notice some issues with banding throughout the film, but other than that, there were no other problems. 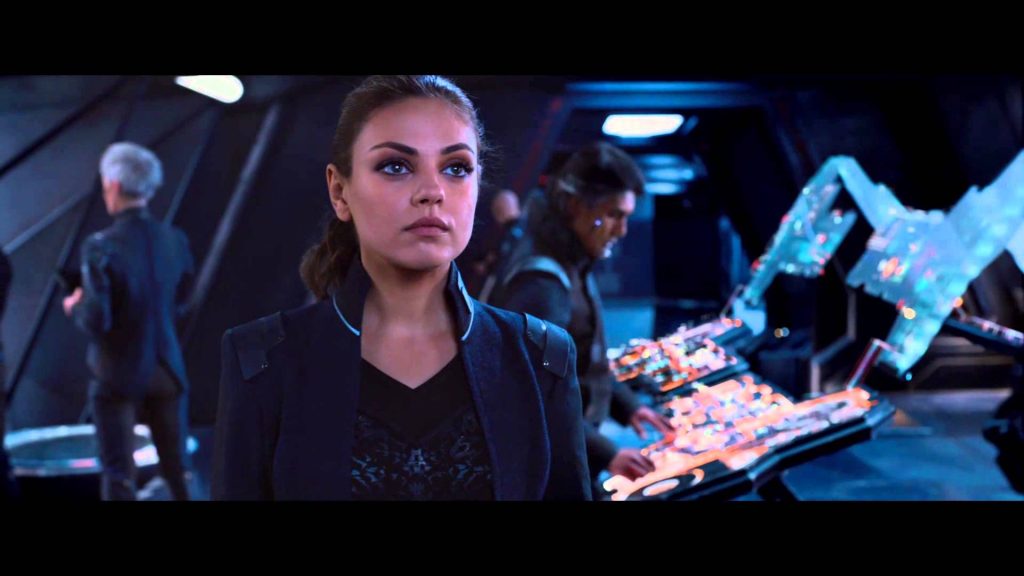 This UHD release of ‘Jupiter Ascending‘ has an English: Dolby Atmos track, where I used a 7.1.2 Atmos speaker setup with the normal 7.1 surround and two overhead speakers, plus a subwoofer powering this sci-fi soundscape. The standard Blu-ray version has a Dolby Atmos track as well. This audio presentation is everything you want in a for this sort of sci-fi action film. It definitely is a demo-worthy track.

Sound effects are boisterous and loud throughout. The ceiling speakers offer great sound of spacecrafts flying overhead, explosions, and guns blasting. It is totally immersive from start to finish. Every ambient sound is well balanced and flows from the surrounds nicely. The low end is in high gear throughout, providing a good amount of bass and depth to each sound effect. The score always adds to the suspense in each scene without drowning out any other sound aspect. Dialogue is always crystal clear and easy to follow, and free of any pops, cracks, hiss, or shrills. 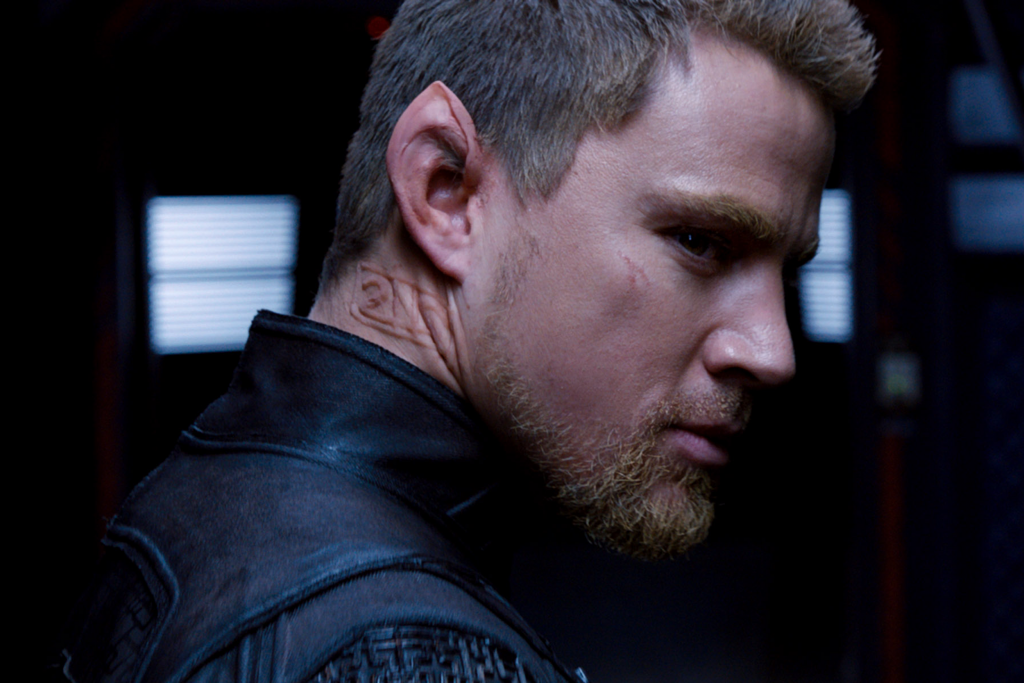 Jupiter Jones: Destiny Within Us (HD, 7 Mins.) – The cast and crew discuss Jupiter’s story and origins.

The Wachowskis: Minds Over Matter (HD, 7 Mins.) – The filmmakers are talked about her by the other cast and crew. A lot of praise for everyone to go around.

Jupiter Ascending: Genetically Spliced (HD, 10 Mins.) – This extra centers on the mutant characters and some of the CGI work, which is cool.

Bullet Time Evolved (HD, 10 Mins.) – Here we have the stunt work, CG, and Green Screen effects discussed and shown with some raw footage. Very cool to see how it’s all made.

From Earth to Jupiter and Everything in Between (HD, 10 Mins.) – This is more of an overall recap of everything discussed above with more interviews.

‘Jupiter Ascending‘ isn’t the best movie out there, but it is damn sure entertaining and fun. It has slowly gained a cult following and continues to grow to this day. There are a lot of great things about this sci-fi action film with some excellent story lines and amazing visual effects. It just doesn’t hit all of the right notes to make it one of the greats. The 4K UHD is a slight upgrade from the standard Blu-ray version, but the Dolby Atmos is demo-worthy. There are some decent bonus features, even if they are a bit repetitive. This one comes RECOMMENDED, since you get the 4K UHD, the standard Blu-ray, and the Digital Copy.