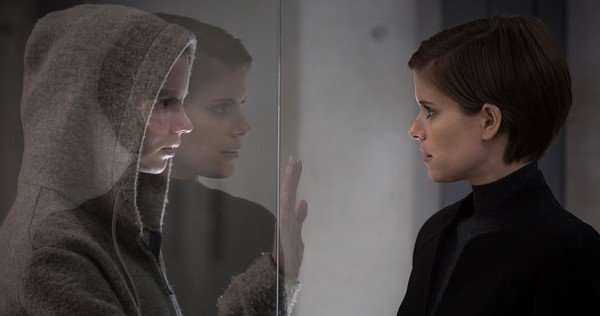 In a world probably closer than we think, attempts at re-engineering DNA lead to MORGAN. Morgan (Anya Taylor-Joy), absolutely lethal with the appearance of the walking dead teenager, was genetically created in a lab. Despite the physical environment, Morgan is shrouded with love from the doctors and technicians. But does love conquer all? An incident calls Morgan’s mental stability (product viability) into question. Enter Lee Weathers (Kate Mara), risk management consultant, come to assess and deal with the situation.

The cast is not bad at all. I have enjoyed Mara in American Horror Story and House of Cards. I’m not familiar with Taylor-Joy, but she can play it cold for sure. Her eyes can just become black holes that will suck the marrow of life from all who surround her. Morgan’s “mother,” Dr. Lui Cheng (Michelle Yeoh – Crouching Tiger, Hidden Dragon, Memoirs of a Geisha, and Tomorrow Never Dies), “father,” Dr. Simon Ziegler (Toby Jones – Ever After, Captain America: The First Avenger), and her friends, Dr. Amy Menser (Rose Leslie – Game of Thrones) and Dr. Kathy Grieff (Jennifer Jason Leigh – Single White Female, Fast Times at Ridgemont High). Even Paul Giamatti makes an appearance as Morgan’s psychiatrist, Dr. Alan Shapiro (interesting name choice). They had good ingredients, but underutilized. The script’s pace was just too rushed for their skills to shine.

Overall, MORGAN was a loaded with gaps, unfinished logic, and dull performances. A manufactured product that has precognition, but doesn’t know how to escape a cage? A “consultant” that is sent to assess and deal with risk, but repeatedly gets its butt kicked? The set design was oddly juxtaposed vintage B&B cabin versus modern prison cell as well as the woods versus the murky lake. Also why make Morgan so pasty and zombie-like? I won’t mention her parallel.

A proposed twist is easily discernible if the viewer pays attention and therefore is not a twist. The filmmakers are asking the audience to accept a lot without much explanation. It’s hard to care for victims that you haven’t developed a connection with or any information to know them. The story needed more fleshing out. The best part of MORGAN is the trailer.

NOT WORTH THE COIN