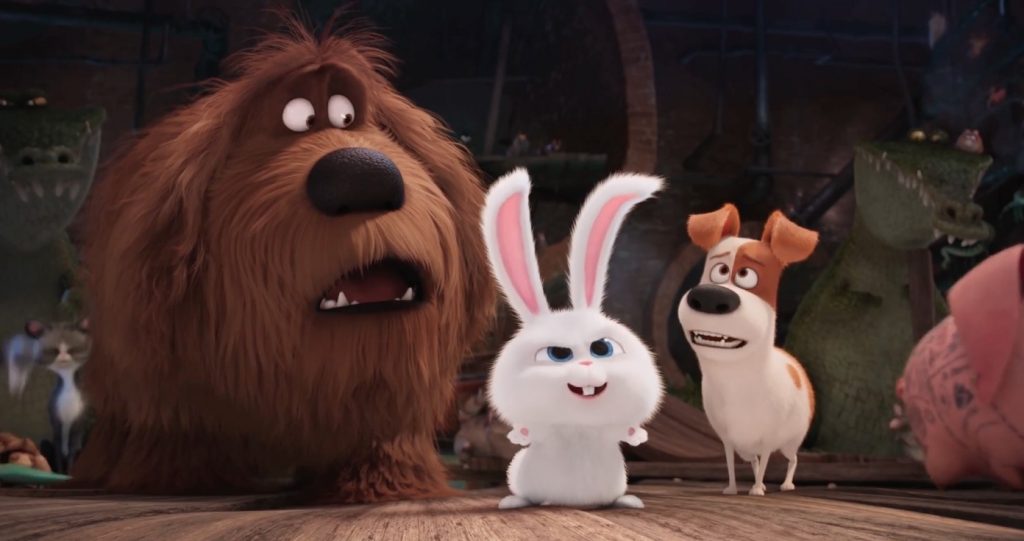 It seems like there are a wealth of animated talking animal movies these days. With Pixar, Disney, and DreamWorks releasing ‘Zootopia‘, ‘The Good Dinosaur‘, ‘Finding Dory‘ and ‘Kung Fu Panda 3‘ recently, it only seems fair that Universal dipped their hands into the sub-genre as well with ‘The Secret Life of Pets‘. Universal’s animation studio Illumination Entertainment brought us ‘Despicable Me‘ and those darn ‘Minions‘ to the big screen, which has made the entertainment business billions of dollars. It seems logical for the studio to cash in on the talking animal genre now, since everyone else is doing it, however with an already over-crowded market for these films, ‘The Secret Life of Pets‘ may fall short of beating out ‘Zootopia‘ and ‘Finding Dory‘ in both the financial and critical realms. I’m not saying that ‘The Secret Life of Pets‘ is a bad movie or anything. In fact there are some great moments that are funny and charming, but it loses itself in the second half of the film when it becomes an action-caper movie that becomes over-the-top and even drags in its short run time of less than 90 minutes.

The film really succeeds when it shows just what are pets do when we humans leave for work in the morning and go out the door. The writers and director (‘Despicable Me‘) sure had some clever and hilarious gags that showed the special nuances of our pets that all of us can relate to, but the story revolves around Max (Louis C.K.), a terrier who has a great bond with his owner. All of that changes when his new owner brings home a new giant brown dog named Duke (Eric Stonestreet). These two dogs are basically the equivalent of Mike and Sully from ‘Monster’s Inc.‘ in both shape and personality. The two don’t get along due to some jealousy issues, but the pair of dogs find themselves lost in the streets in a beautifully rendered Manhattan without collars, and are now on the run from the dog catchers as well as an underground animal rebellion known as the ‘Flushed Pets’, led by a psychotic ninja bunny rabbit named Snowball (Kevin Hart turned up to 11).

Max’s pet friends try to search for him, including a ritzy and hopeless romantic Pomeranian (Jenny Slate), an obese house cat (Lake Bell), a hyperactive pug (Bobby Moynihan), a relaxed dachsund (Hannibal Buress), a tiny parakeet (Tara Strong), a confused Hawk (Albert Brooks), and a spry, old hound (Dana Carvey). Yes, there are too many characters here, and in fact, there are more in the film, which is one of its downfalls. There are just too many characters to juggle in this short time span and most characters just show up for a small amount of time for a few jokes and laughs, then basically disappear.

Again, the first half of the film is quite enjoyable with all of the quirks and actions of each pet getting laughs, however in the second half of the film, pets are driving human cars down the busy streets of New York and all come together in a ‘Spider-Man‘ like scenario climax. Perhaps one of the best scenes in the film is when Max and Duke head to a hot dog factory that plays out like ‘Grease‘ and early 40’s musical movies. With most of the characters not getting enough time for care and the over-the-top action sequences once again, ‘The Secret Life of Pets‘ becomes rather exhausting and most unfunny toward the end. Still, the film looks amazing visually with the ever so tall skyline of New York as seen through the eyes of our smaller furry friends and the score by Alexandre Desplat sounds excellent and has the Woody Allen New York vibe to it. The film is still mostly enjoyable and has some great comedic moments, but if it just stuck with a simpler story line, instead of turing into an action film, things would have flowed smoother.