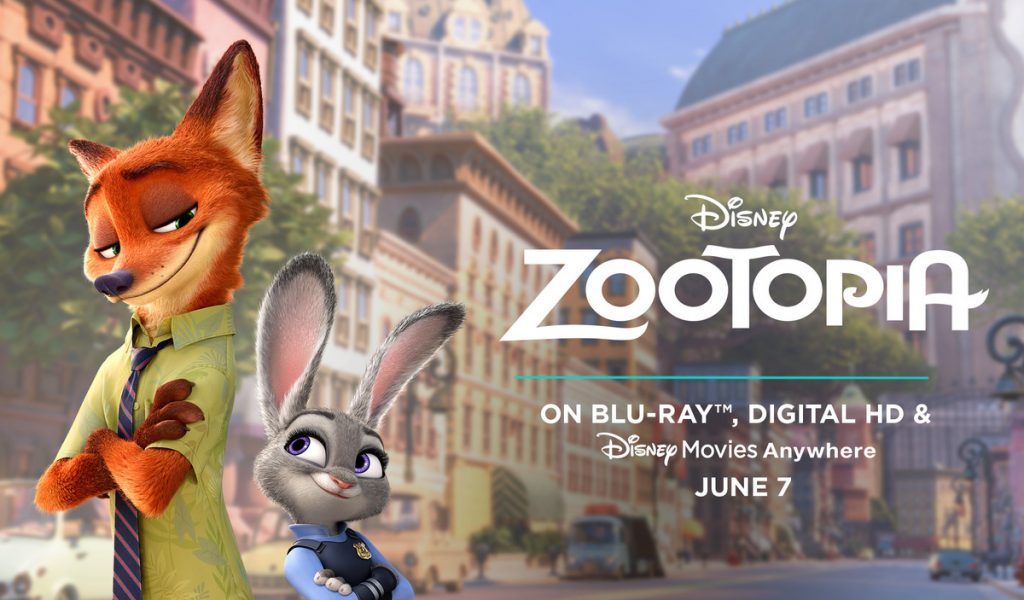 Walt Disney Animation Studios‘ ‘Zootopia‘ will be available June 7 on a variety of formats including Digital HD, Blu-ray and Disney Movies Anywhere. The animated feature is the best reviewed movie of 2016, so far and will be a fantastic addition to your home video collection. Directed by Byron Howard (‘Tangled‘, ‘Bolt‘) and Rich Moore (‘Wreck-It Ralph‘, ‘The Simpsons‘) and produced by Clark Spencer (‘Wreck-It-Ralph‘, ‘Lilo & Stitch‘).

Ginnifer Goodwin and Jason Bateman star as rookie rabbit offer Judy Hopps and scam-artist fox Nick Wilde. The progressive mammal metropolis of Zootopia is a melting pot where animals from every habitat live side by side and “anyone can be anything.” But when new rabbit police officer Judy Hopps arrives in town she discovers that being the first bunny on a police force of tough, hulking animals isn’t so easy. Determined to prove herself, she jumps at the opportunity to crack an unsolved, challenging case even if it means working with a fast-talking, scam-artist fox, Nick Wilde, to solve the mystery. But the case leads these two unlikely partners to an uneasy conclusion that Zootopia’s “evolved” society is being pulled apart by unseen forces determined to use fear to take control of the city by turning predators and prey against each other.

Bonus Features For BLU-RAY 3D, BLU-RAY & DIGITAL HD:
· Zoology: The Roundtables – Ginnifer Goodwin hosts an in-depth look at the movie’s characters, animation, environments and more. The artists at Disney Animation give a rare and in-depth look at the complexities of bringing an all-animal world to life from the ground-breaking technology behind the characters’ fur and clothing to the varied and vast environments of Tundratown, Sahara Square and the Rainforest District as well as the deep thought and research given to bringing 64 unique animal species to life through animation.

· The Origin of an Animal Tale – Follow the story’s development from its origins to a big story shift that turned the film upside down. In this feature-length documentary, filmmakers give a candid look into the difficulties of creating the story of Zootopia and the bold decision to switch the main character late in the production process, putting one resolute rabbit center stage.

· Research: A True-Life Adventure – The filmmakers traveled the globe to find inspiration for the diverse characters and amazing city of Zootopia. They reflect on the importance of research and how a deep dive into animal behavior at Disney Animal Kingdom theme park and a deep immersion into animal society on the African savanna shaped and inspired the characters of Zootopia and changed the filmmakers’ lives forever.

· Z.P.D. Forensic Files – Find the movie’s hidden Easter Eggs. Every city has its hidden gems, especially when it has been created by the filmmakers of Disney Animation who love nothing more than sprinkling hidden references to some of Disney’s greatest animated features throughout the story.
· Scoretopia – Academy Award®-winning composer, Michael Giacchino spotlights five of cinema’s greatest percussionists and how they brought an organic, animalistic sound to his powerful and emotional music score.

· Deleted Characters – Directors Byron Howard and Rich Moore introduce citizens of Zootopia who did not make the final cut.

· Deleted Scenes:
– Alternate Opening – Young Judy Hopps rescues a fellow classmate and realizes she can reach beyond a life in carrot farming to a future in law enforcement.
– Wild Times! Pitch – Nick desperately pitches the bankers of Zootopia on funding Wild Times!, an amusement park made exclusively for the predators of Zootopia and a sure-fire, money-making scheme for Nick and his friends.
– Alternate Homesick Hopps – After a frustrating first day on the force, Judy has a conversation with her parents. See how this scene changed from a heartfelt conversation with her parents to tough love when her parents discover their daughter is only a meter maid and not a “real cop.”
– Detective Work – Judy borrows a fellow police officer’s computer to conduct research, which turns out to be no small task.
– Alternate Jumbo Pop – In this early version of the story where Nick was the main character, the filmmakers and Jason Bateman were able to take hustling to a new level.
– Hopps’ Apartment – When Judy’s entire family pays her a surprise visit they are shocked to discover the company she’s keeping.
– The Taming Party – In this emotional clip from an early version of “Zootopia,” Judy attends her first “taming party” and gains a deeper understanding of the plight of the predator.

· “Try Everything” Music Video by Shakira