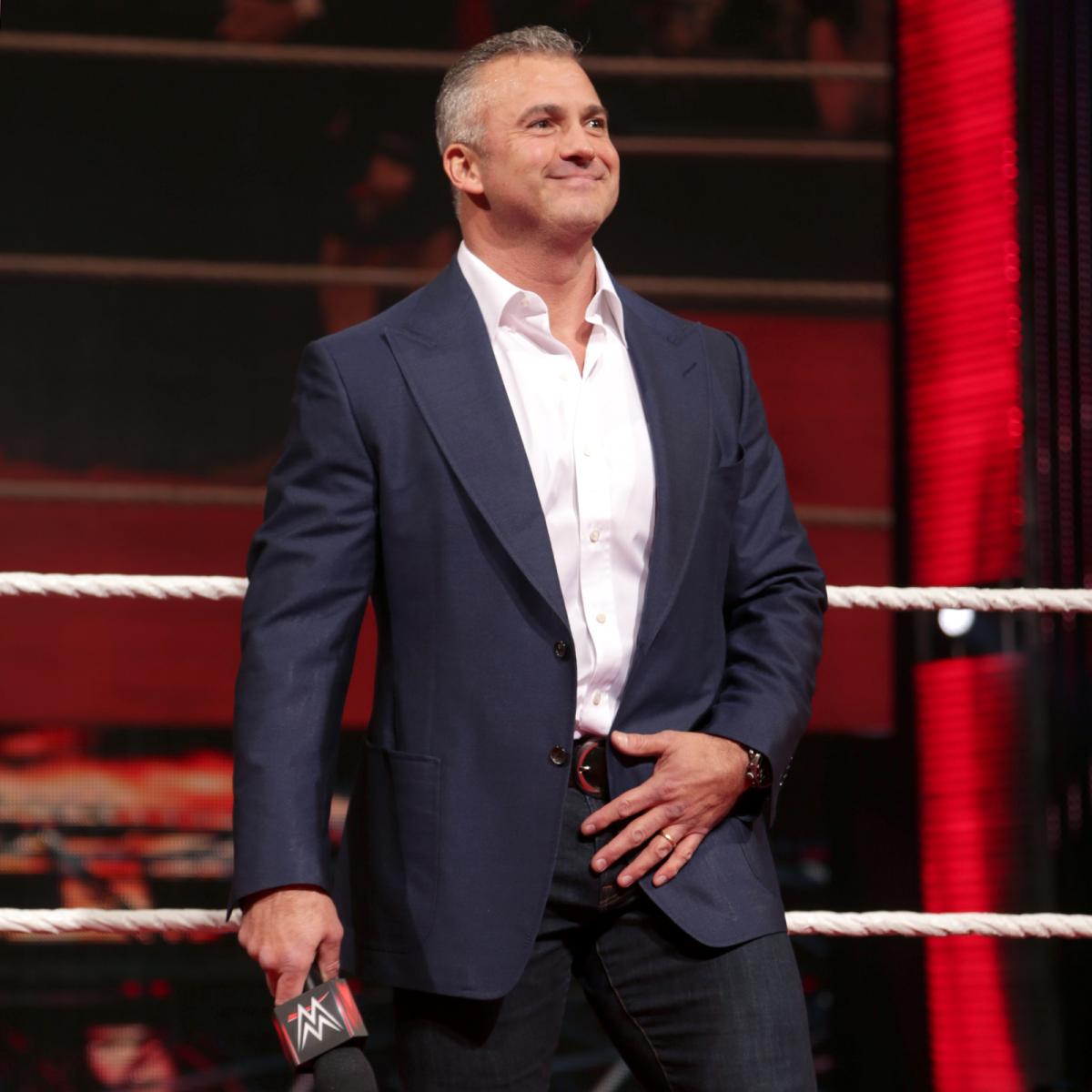 Ever have one of those moments where you know the world as you know it has changed forever? WWE‘s Monday Night RAW from Detroit, MI had just that moment! With Wrestlemania (which can be seen on the WWE Network) looming, the WWE Universe was faced with one of those moments. The night had its with the Beast Incarnate and Dean Ambrose meeting again, the Diva’s division heating up and the return many of us have been praying for, the return of SHANE MCMAHON! Did you miss Raw? (I’m so sorry for you if you did.) No worries, I got your back! 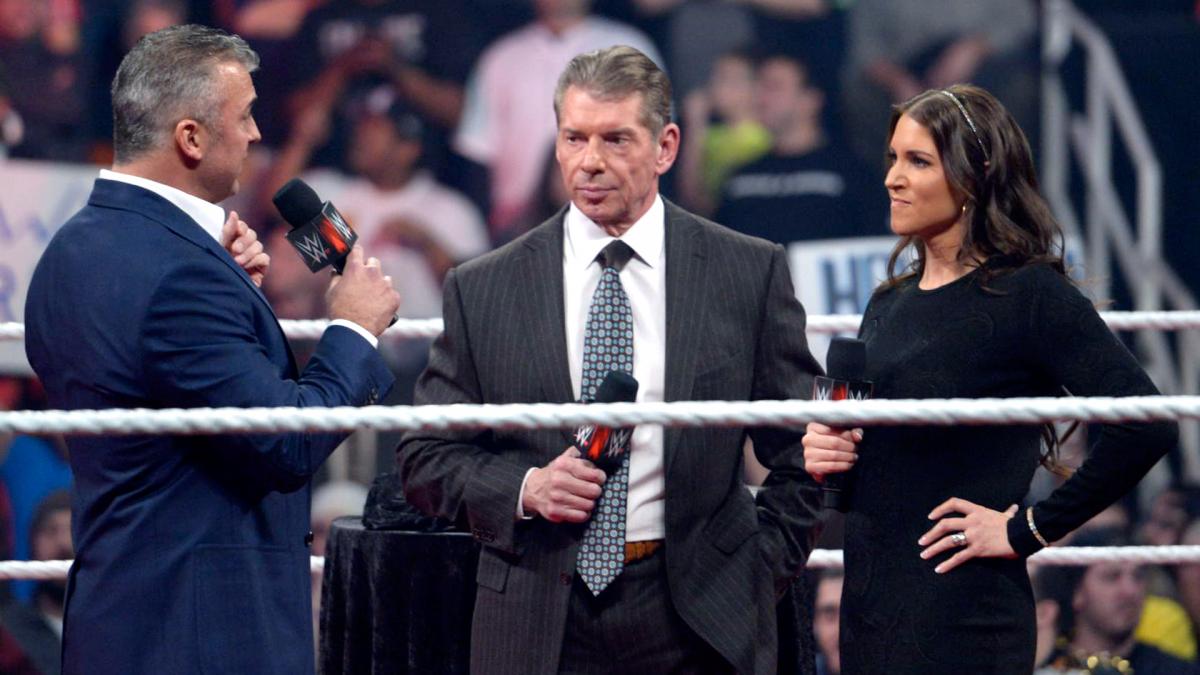 Shane McMahon Comes Home and Wants it ALL!

The night began humbly enough. With the presentation of the Vincent J. McMahon Legacy of Excellence Award. The most prestigious award that can be bestowed upon a person in the WWE. It was only fitting that the person to present the award would be the CEO of the company, Vincent K. McMahon. Also completely fitting, the person who won the award and who has exhibited a kind heart and strength of character, Stephanie McMahon! Or so we all thought… There was one person specifically who took exception to the recipient. None other than Shane McMahon!!!

Shane has been absent from the spot light for 6 years and he chose this time to come back because he said that Stephanie and Triple H have run the company into the ground with the numerous injuries, dropping stock prices, and lack of ratings as of late. He stated that while he had been gone, he never lost his place in line that Steph had only risen to her place of Authority because he allowed it. Stephanie questioned the validity of Shane’s claims but Vince assured her they would speak later and requested that she leave the ring so he and Shane could discuss terms.

Once Stephanie left, Vince asked Shane what it was that he wanted. Simply put Shane-o-Mac wants control of Monday Night Raw! Vince said he would give control of the WWE’s flagship program if Shane agreed to one more match at the place and time of his choosing as well as the opponent of his choosing. Shane agreed. It was at this point that Vince revealed that Shane’s opponent would be the UNDERTAKER at Wrestlemania inside HELL IN A CELL! 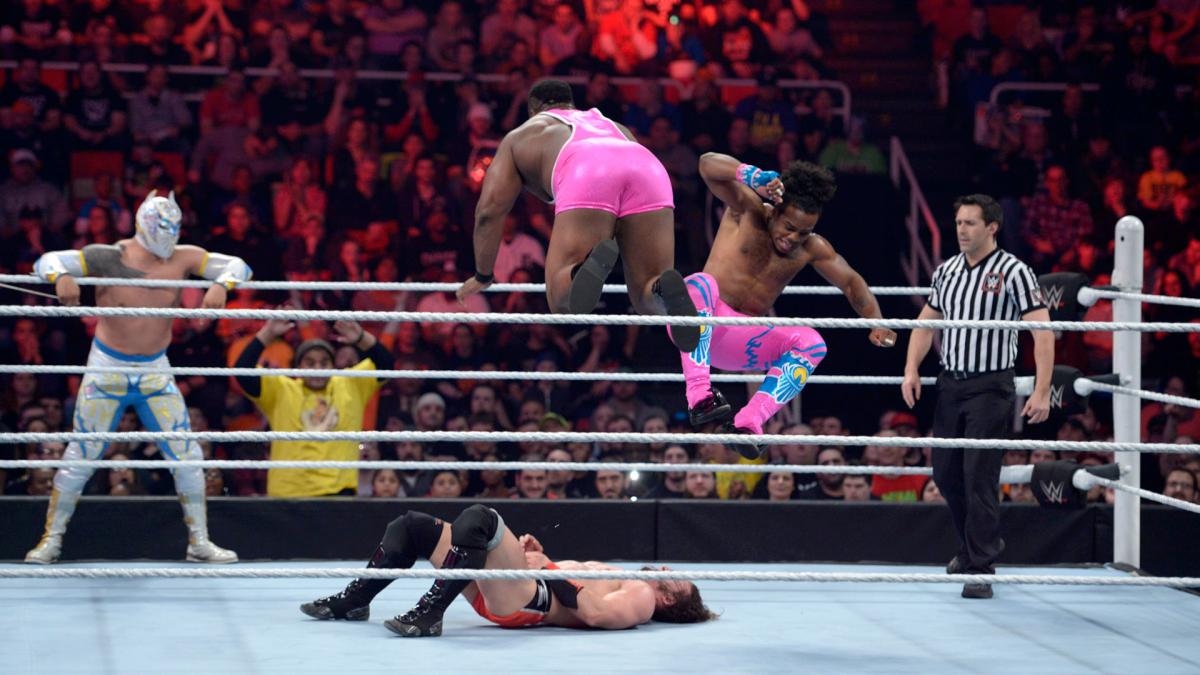 The New Day vs The Lucha Dragons & Neville

The power of positivity is an amazing thing. It will always prevail over the odds. This is always proven true when the New Day take to the ring. It matters not who they are put against, the magical Unicorns of the WWE will come out on top.

This 6 man tag match saw the trio up against the formidable high flying team of the Lucha Dragons and Neville. The match saw all 6 men pull out all the stops in an attempt to get the win. Each of the high flyers were isolated from their team at one point with Neville taking a Unicorn Stampede. It almost seemed as if the Dragons and Neville would pull it off with a huge rally when Sin Cara tagged in. But unfortunately, the high risk takers took one risk too many and the New Day was able to once again, walk away victorious. NEW DAY ROCKS! 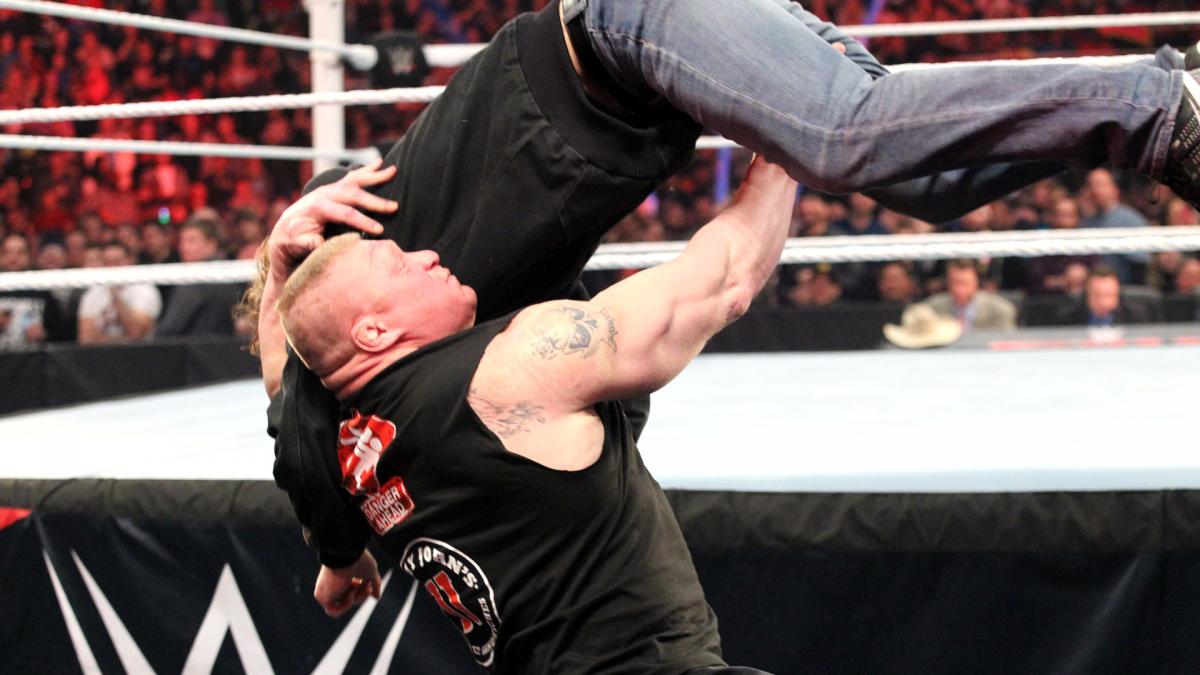 Earlier in the day, news broke on WWE.com that Brock Lesnar ambushed Dean Ambrose as he arrived for Raw. The WWE Universe was later updated that Dean was at the hospital undergoing tests as the Beast Incarnate had put him through a wind shield an that’s not typically a healthy thing to happen to a person.

Now, Brock felt the need to explain himself and who better than his advocate, Paul Heyman to do the talking. Paul stated in his way, that Lesnar does not take losing lightly and he felt the need to make Ambrose pay. Paul also demanded that someone new be put forth for the conquering as Ambrose was incapacitated.

Or so he thought…

Paul is interrupted by an ambulance arriving into the area driven by none other than Dean Ambrose (neck brace and all. What is this? his third one he’s stolen in recent memory?) Dean crawls his way to the ring and demanded a No Holds Barred Match with Brock Lesnar at Wrestlemania. Brock’s answer is an F-5 to the Lunatic Fringe on the floor. Luckily, Heyman was there to translate as he stated that Brock accepts.

The Ascention vs the Usos

Won’t lie, didn’t pay much attention to this one. But the jist is the Usos won in a pretty one sided match (what happened Ascension???? You guys ran the NXT tag team division…) to prove a point to the Dudley Boyz that they are harder to put down than they look. 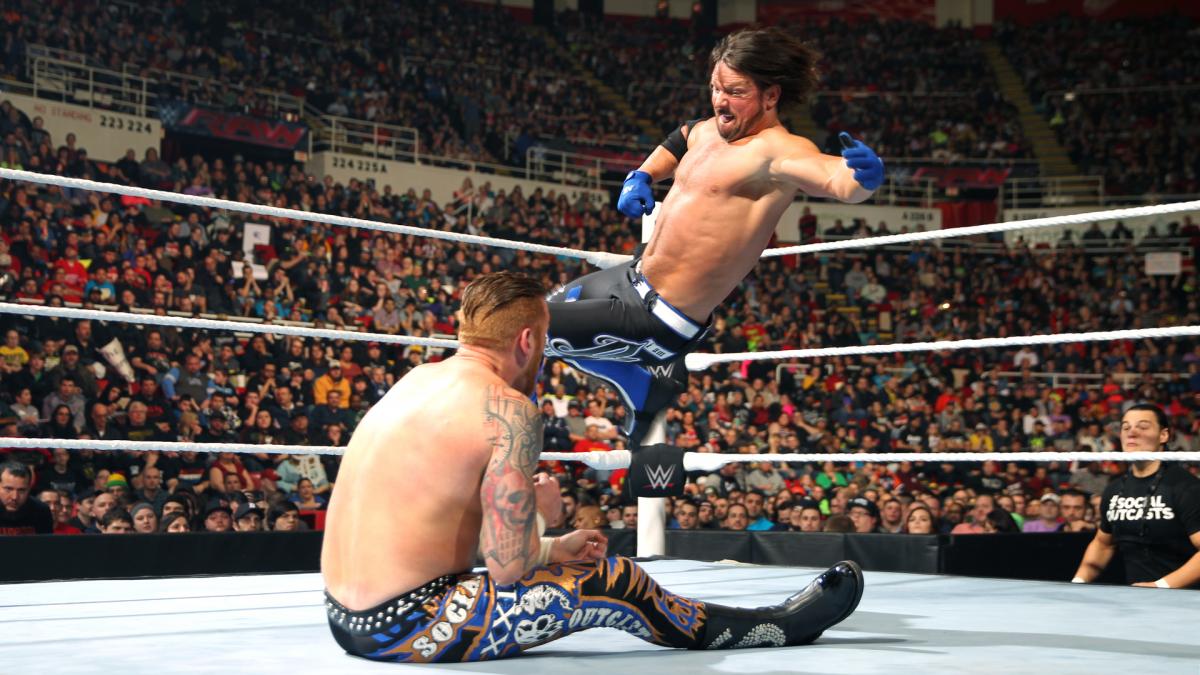 Chris Jericho arrived to the ring and welcomed everyone to Monday Night Jericho. He came out because he said he wanted to tell AJ Styles something face to face and requested that Styles join him in the ring. Out comes the Phenomenal One. Y2J stated that he may not like AJ, but he respected him and that their match at Fastlane was possible the best match he had ever had.

Out come the Social Outcasts to save the WWE Universe from much more ass kissing. The result of the interruption was the new formation of team Y2AJ vs Social Outcast members, Heath Slater and Curtis Axel.

It was apparent that Slater and Axel were out matched as AJ and Jericho pulled out the win even with interference from the other members of the Social Outcasts, Bo Dallas and Adam Rose. I will give it to these guys though, they are entertaining even when getting tapped out by the Walls of Jericho. 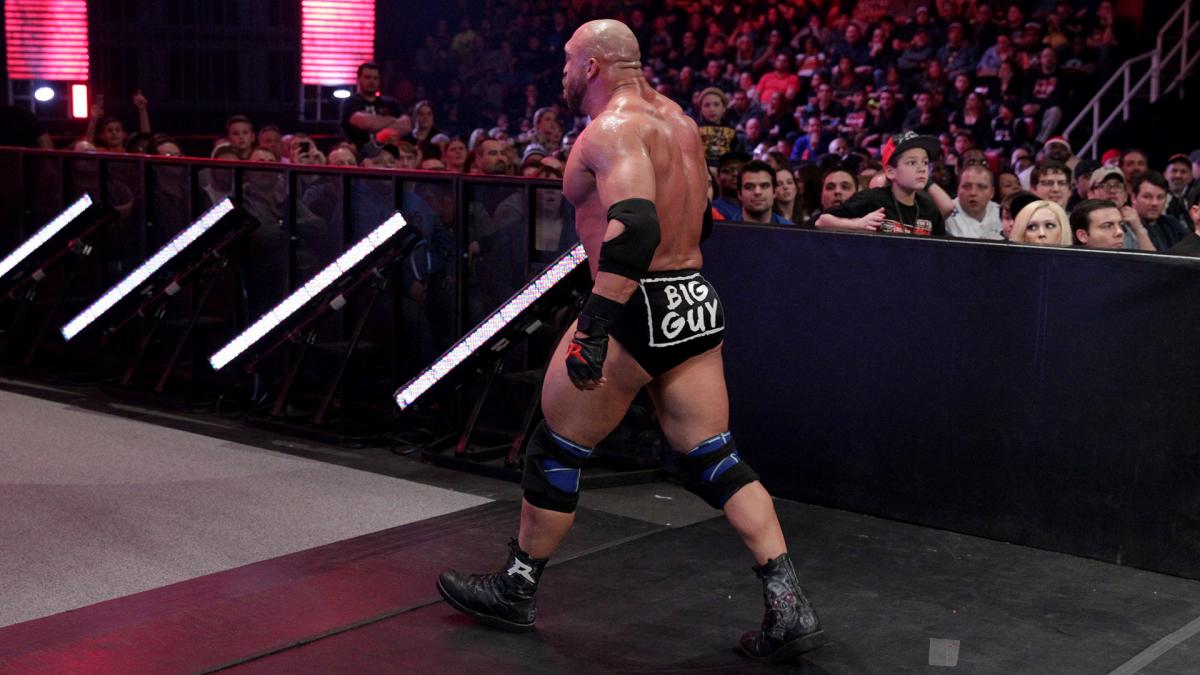 The Wyatt Family vs The Big Show, Kane, & Ryback

This match was a nope for me. It did not hold my interest the night before at Fastlane, and the rematch was even less interesting. Big guys lumbering about the ring doing the things giants do, just don’t keep this chica invested. Interesting point came when Ryback realized the match was a waste of time and left his team. Kane and Big Show lost the match and the Wyatts stood over their fallen carcasses.

It was never a doubt that the match between Naomi and Sasha would be athletic and fun to watch. Even Tamina couldn’t ruin it with her third wheelness as she was eventually neutralized by Becky Lynch. Down to the one on one, Sasha was able to put Naomi away with the Bank Statement.

This budding partnership an celebration was interrupted by the genetically superior Diva’s champion, Charlotte who stated that the Diva’s title would be on the line at Wrestlemania. The person who had the honor of being her opponent (cuz it is indeed an honor to share the ring with her), would be decided in a match. The match of Sasha Banks vs Becky Lynch!

Following his victory at Fastlane, Roman Reigns found himself in a match with former champion, Sheamus, who was accompanied tot he ring by his League of Nations Buddies. The match was physical and hard hitting, and Sheamus did end up losing his back up. As the tides turned to Roman’s favor, out comes current WWE World Heavyweight Champion, Triple H!

The Cerebral Assassin was dressed for a fight as he bee lined to the ring to attack the number one contender to the title. Roman fought back but he was out matched by the more experienced champion. Triple H showed why he is one of the most feared men in the business as he dismantled his challenger and caused the Samoan Superman to be covered in his own blood from bashing his head against the announcers desk. But the Game was far from finished as he ten delivered a Pedigree to the helpless Reigns, much to the crowds delight as they cheered our Champion and his display of power.