‘Guardians of the Galaxy Vol. 2‘ promises to be every bit as much an awesome ride as its predecessor. We’ve got a new mix tape our heroes will be kicking ass, and dancing, to. The first soundtrack was nominated for a Grammy, so this one has to up the ante. Plus new cast members including one suave, charming dude that wasn’t at all shy about kicking a chick’s ass in ‘The Hateful Eight‘, that’s right – Kurt Russell. Who are the others new cast members you ask, I’ve got the details after the jump. 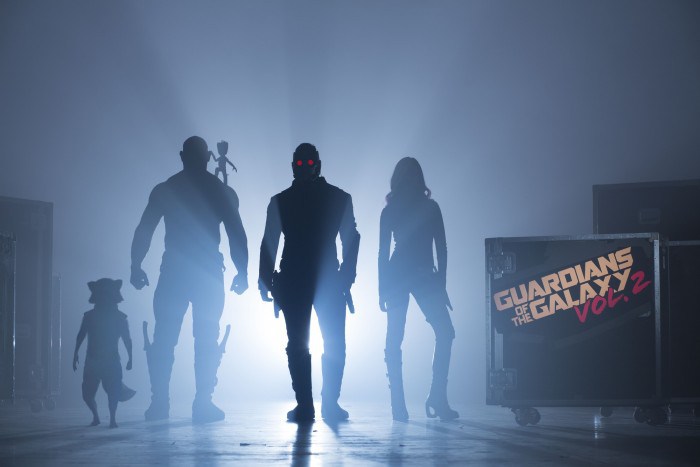 If you’re up on your Who’s Who Among Actors you’d already know who they were from the pic above, but if you’re like me an “Know they look familiar, but from where?” keep reading. Next to Russell is Elizabeth Debicki (‘The Great Gatsby‘, ‘Everest‘), Chris Sullivan (‘The Knick‘, ‘The Drop‘) and Pom Klementieff (‘Oldboy‘, ‘Hacker’s Game‘). Want more info on their characters for GOTG2? Unfortunately, we all want more info but that’s one thing the studio is staying mum on. The studio did give us a nifty, teaser pic though, don’t ya think?

Original helmer and writer James Gunn is back for another spin into the Marvel Universe and he’s not alone. He’s brought the cast from the first flick, too. Chris Pratt (‘Jurassic World‘, ‘Parks and Recreation‘) will dance back into our hearts as Peter Quill/Star-Lord, with Zoe Saldana (‘Star Trek Into Darkness‘) as Gamora; Dave Bautista (‘Spectre‘) as Drax, Vin Diesel (‘Fast and Furious‘ franchise) as the voice of Groot; Bradley Cooper (‘American Sniper‘, ‘Joy‘) voicing Rocket; Michael Rooker (‘The Walking Dead‘, ‘Jumper‘) as Yondu; Karen Gillan (‘Doctor Who‘, ‘The Big Short‘) as Nebula and Sean Gunn (‘Gilmore Girls‘) as Kraglin, he’s coming back to the ‘Gilmore Girls‘ revival, too and just happens to be the brother of the director James Gunn!

The only thing we know about the plot is the team attempts to unravel the mystery of Peter Quill’s true parentage. We’ll hopefully know more before long and, if not, it drops to theaters in May of 2017. Not long to wait, right?