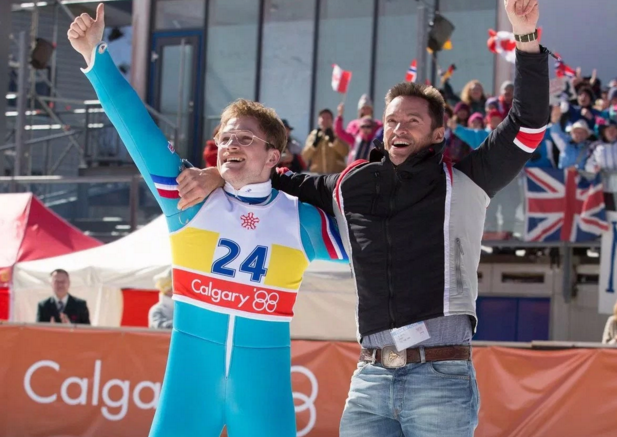 Underdog stories are almost always fun. From ‘Miracle‘ to ‘Rocky‘ to even ‘Little Giants‘, these stories of regular people, who you normally wouldn’t pick for a sports team, prove that they have enough heart, guts, blood, and spirit to give it a real shot and make it to the top. Some of these films and television shows we’ve seen that have portrayed the ‘underdog’ scenario have been based on real people and real events, such as this one, ‘Eddie the Eagle‘. If you grew up during the 1980s, you might remember hearing about ‘Eddie the Eagle‘, who was a British Olympic ski jumper at the Calgary 1988 Olympics.

In fact, he was the only British Olympic ski jumper at the 1988 Olympics. In real life, ‘Eddie the Eagle‘ (real name Michael Edwards) was shorter and lighter than any athlete. He was a decent downhill skier, but the British Olympic team didn’t think he had what it took to be part of their organization. Basically, he didn’t fit the profile with his big glasses or less than stellar times (although he qualified for all of them.) He then found out that there hadn’t been a British ski jumper in the Olympics for many years, and that he could qualify easily without any competition, that would send him to the big games in Calgary. 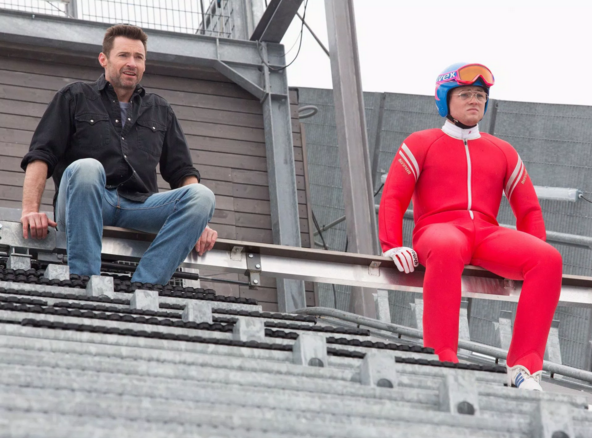 He had no funding, no money, and no place to stay, but a couple people took interest in him and helped him train the dirt cheap way. With his determination, guts, and glory, he qualified and made it to the Olympics where he came in last place, but still was the British record holder for his sport. He made national news on being the underdog, had a big following, became a celebrity, and was even mentioned at the big Olympic’s speech at the end of the games. And now we have a film by Dexter Fletcher and produced by Matthew Vaughn (‘Kick-Ass‘, ‘Layer Cake‘), starring Taron Egerton (‘Kingsman: The Secret Service‘) and Hugh Jackman.

Egerton was a badass in ‘Kingsman‘, killing all the bad guys and getting the girl in the end, however here, he is more of a goofy and likable guy with big thick glasses who won’t give up on his passion, which is Olympic sport, and he is perfect for the role from the physical aspect and body language to the delivery of dialogue. You really connect with him and his spirit. When he does his first ski jump at a practice facility in Germany, he meets an American named Bronson Peary (Jackman), who is basically his Wolverine character without the sideburns. Bronson does not wear winter jackets in the cold as hell temperatures in Canada or Germany, but rather drinks a bottle of whisky every few hours to drown his sorrows from quitting the ski jumping sport at a young age. 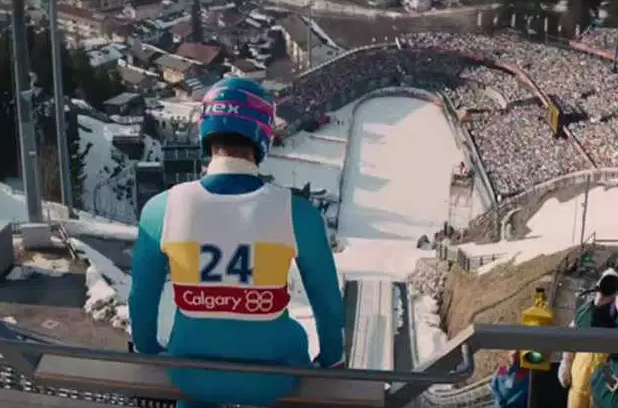 This is where Bronson reluctantly coaches Eddie, but, only after he does a ski jump in blue jeans, and short sleeve shirt, and a cigarette in his mouth. This seemed out of place, but garnered a laugh. The usual underdog tropes accompany this film with almost everybody throwing obstacles in their way and of course, telling Eddie and Bronson they can’t make the Olympics. Of course this doesn’t stop them, and the pay off is very rewarding for both characters as well as the audience.

There are some cheesy moments of course here with closeups on the thumbs up, and tons of training montages, but it all works with ‘Eddie the Eagle‘ for some reason. These characters are just so likable and the soundtrack is fantastic, chock full of fun upbeat rock. This underdog story sure has a lot of heart and is very entertaining on all levels. Now I want to practice ski jumping.