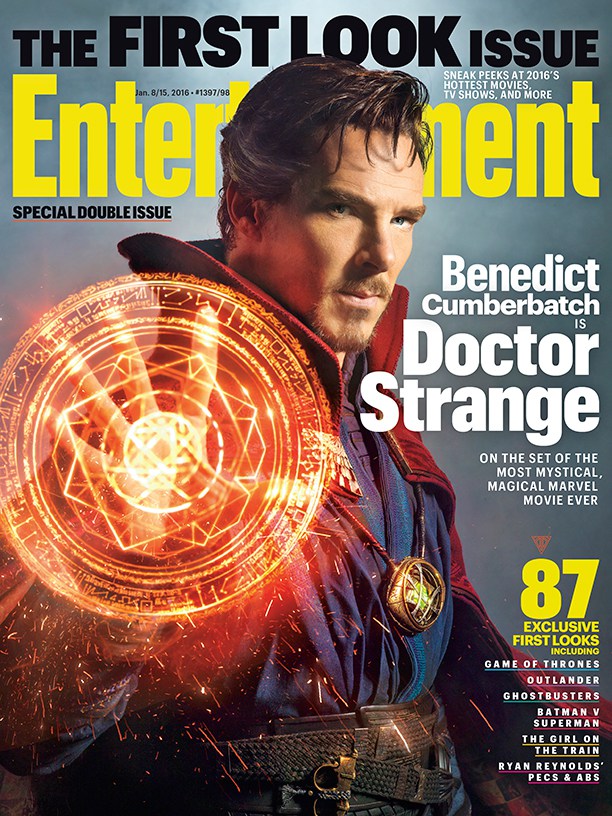 Ever since I heard the news that Benedict Cumberbatch was cast in the titular role for ‘Doctor Strange‘, I didn’t really have any trouble picturing him in the robes of the great Strange and now, none of us have to wonder or guess how it will look as we have pictures, now! Who says Christmas comes only one time a year?!

Entertainment Weekly introduced the first look as the cover of its latest issue, so we have that, plus all kinds of concept art that will give us a total feel for the film, even though it just started filming in November! Cinematographer Ben Davis cites the Disney experimental film ‘Fantasia‘ as a visual influence on the film: “It has a very psychedelic grounding, and most of the work is about other dimensions.”

The Marvel adventure follows Stephen Strange, a hotshot neurosurgeon whose career is derailed after a horrific car accident. In a desperate attempt to get his life back on track, he stumbles into the discovery of magic. The film co-stars Tilda Swinton as the Ancient One who is Strange’s mentor in the magical arts. Chiwetel Ejiofor plays Baron Mordo, Strange’s rival and Mads Mikkelsen has just been cast as an unknown villain but he’s described as a sorcerer who breaks off into his own sect, his belief is that the Ancient One is just protecting her own power base. Rachel McAdams and Michael Stuhlbarg also star.

Director Kevin Feige gave us this quote about the project, “When this comic appeared in the early ’60s, it really informed, in a way that is pretty amazing, a lot of the psychedelic ’60s as we know it. I don’t know that they were doing anything weird in the bullpen in Marvel, but certainly the stuff they were doing inspired all those people who were doing mind-expansion experiments at the time. So, that’s inherent to the property. And that’s our mission statement for the visual effects on this movie.”

Cumberbatch offered his concerns about being photographed this early in the character creation process. “I’m still in the infancy of learning all that. It was like, okay, I’ve got to keep throwing these poses, these spells, these rune-casting things, everything he does physically. I’m thinking, there’s going to be a huge amount of speculation and intrigue over the positioning of that finger as opposed to it being there, or there. And I’m still working on that. We haven’t played any of those scenes yet. I felt really self-conscious. But, then, by the end, it was great. It’s like anything, you just have to experiment.”

Shooting on ‘Doctor Strange‘ is currently filming and will hit theaters November 4, 2016.