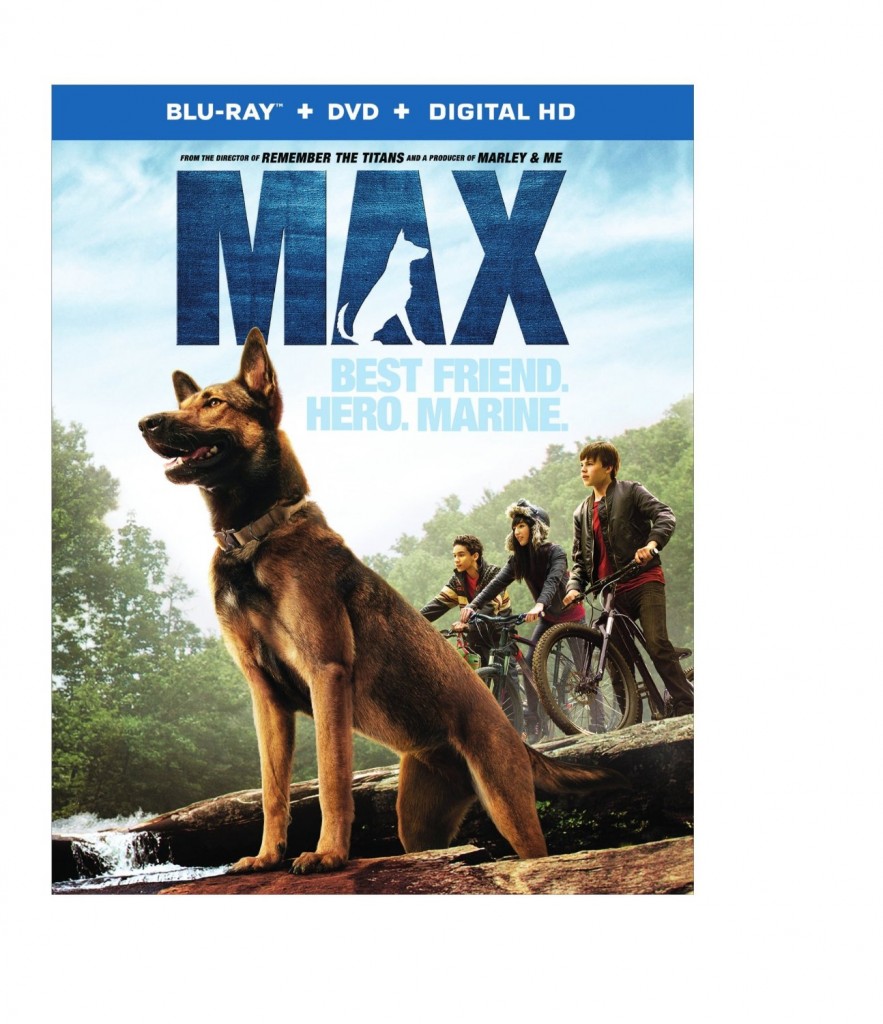 Bye Lassie…Bye Benji…Bye to my childhood doggie heroes.  There’s a new action star in town.  Max (Carlos) is the cleverest doggie hero ever.  A Belgian Malinois, Max, is also a Marine service dog.  Finally a film brings sincere tribute to the heroism and struggles these beautiful yet fierce animals endure. Max opens in a desert terrain shot as from Max’s point of view.  Max searches out the village for insurgents and a weapons stash.  Max is highly adept to weapons’ discovery and of course successful in warning his team of Marines of insurgents.  Kyle (Robbie Amell) is Max’s handler.  The two are inseparable.

Tragedy strikes, as Tyler (Luke Kleintank), against Max’s warning, orders Kyle to urge Max to proceed.  Tyler is a longtime friend and fellow serviceman of Kyle’s.  An insurgent blows two bombs on each side of the road. Kyle runs after Max and is killed.  (No worries, parents, how Kyle is killed is not shown.) The loss of Kyle and the explosions from the attack leave Max traumatized to the point that he can no longer serve in the war.  He attacks people, even those who formally trained him, and no one can manage him.  Enter Kyle’s family, comprised of Kyle’s father, Ray (Thomas Haden Church), mother, Pamela (Lauren Graham), and brother, Justin (Josh Wiggins).  Justin is your typical rebellious younger brother type.  He is as blunt as a spoon, too.  He resents that Kyle left to be a soldier.

At Kyle’s funeral, Max drags two Marines up the aisle to Kyle’s casket.  Max stands on his hind legs, paws on the casket in a way that will make tears well up in your eyes.  Then Max lies down in front of Kyle’s casket and the floodgates open.  As the Marines try to remove him, Max picks up a friendly scent from Justin.  With Justin, Max is calm and compliant.  The moment Max parts from Justin, he becomes rabid.  The decision comes that Max must be put down.  Reyes (Jay Hernandez) has the great idea that Max is meant to be with Justin.  Will their friendship work?

The actors make solid performances in Max.  However, Carlos steals the show time and time again.  The things this dog does is on par with action stars like Matt Damon, Chris Hemsworth, Jason Statham, and I’d even add iconic action stars like Bruce Willis, Denzel Washington, and Liam Neeson.  He’s clever, resourceful, and has a heart that does not stop.  The list could easily go on.  Boaz Yakin’s, the director’s, vision of Max is savvy as well as lethal.  Carlos makes you believe it.

Max is a terrific adventure for the whole family.  The film is rated PG and is family-friendly.  You will fall in love with Carlos.  I hope that he is used in future films, because the stunts he performed were amazing.  The bond between Max and Justin is awe-inspiring.  The cinematography is brilliant in the manner of which it provides a dog’s eye view of the world.  Literally shot on Max’s level as though you are looking through his eyes or the eyes of his canine enemies.  Buckle in, because Max is a thrilling ride as well as an emotional one.  Nothing is more beautiful than a family coming together.  In closing, we should always honor our soldiers, humans, animals, and even insects if you can believe it.  It is wonderful to see their service being esteemed. 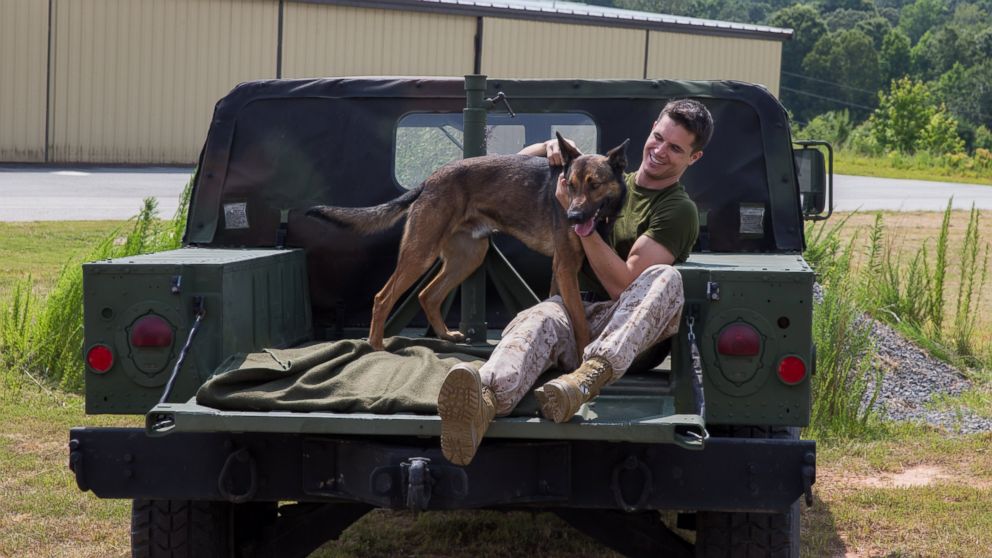 The display for Max was transferred into a 1080p HD with a 2.4:1 aspect ratio.  The image is sharp in the majority of the frames.  The black levels are even producing a consistent depth in every shot.  The lighting in daytime and nighttime appear as though there is a perpetual lamp hanging over each scene.  It literally made a woman’s hair look like a shiny helmet. By the way, hair people, something should have been done about Pam’s hair.  The sharpness and clarity of the image made her hair so matted looking.  I don’t recall this aspect in the theater, but maybe Blu-ray makes it more noticeable. The film does possess a blue overtone.  This doesn’t wash out the vibrant color scheme.  In the night scenes especially, this gives each character a surreal glow.  It’s not easy to control the sunlight/sun flares in production, but surely this could have been evened out a little bit more in post.  The close-ups give excellent detail from the hairs on their heads to sparking embers of the rails from an explosion.  A lot of the film is set in the forest and mountain terrain, which is vast in scope and beautiful in vivid shades of green and grey.

Max resounds the DTS-HD MA 5.1 mix as well as a Dolby Digital MA 5.1 mix for our fellow French and Spanish movie lovers.  The sound design is crisp and well balanced between the dialogue and the non-diegetic sounds (score, soundtrack, etc.)  The sound mix is very detailed which reinforces the tribute theme of Max. In addition, the volume matching is nearly perfect for the narrative.  Score and soundtrack don’t overwhelm the dialogue.  The subtleness of fans blowing in the background and the appropriate level of chirping of insects makes Max both natural and realistic.  The bikes’ wheels hitting the ground and the dogs’ pounding steps in the forest are clear and distinguishable.  The sound aids the illusion that you are really there in Max’s world.

Working with Max (5 mins.) – Reveals the reality of film production with trained animals, very informative.  Cast and crew offer great rhetoric.  Also, can you guess how many, if any, additional Belgian Malinois portrayed Max other than Carlos.

Hero Dogs: A Journey (8 mins.) – Insight into the Belgian Malinois’ career within the military.   Along with voice-over clips from Max, this extra further honored these heroic dogs. 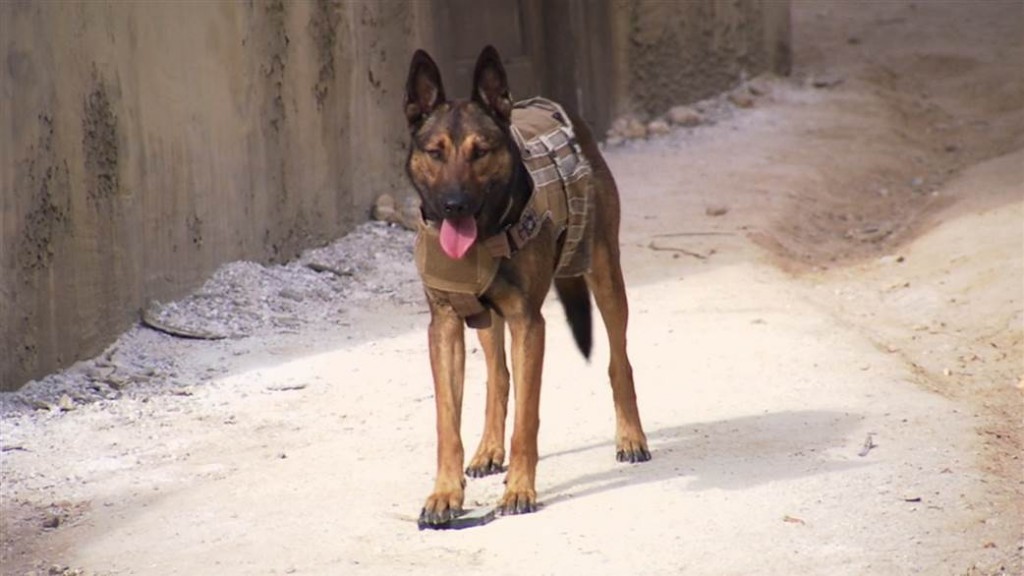 Max was a thrill ride in the theater and that translates to the Blu-ray release. This is a must see film for the whole family.  It is not your sappy Old Yeller type of dog film.  You will feel inspired and know the true meaning of Semper Fidelis (always loyal).  Max is a wonderful tribute film.  We must never forget our soldiers, all of our soldiers, humans and animals.