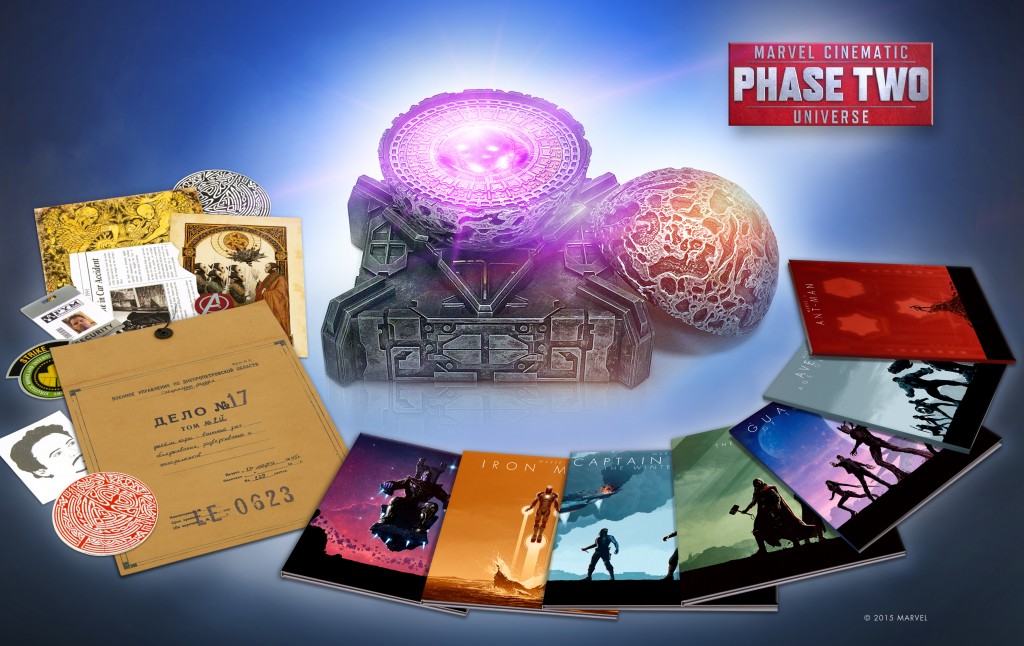 Marvel Cinematic Universe: Phase Two Collection will be available December 8, 2015, just in time for the comic book lover to unwrap it Christmas morning. This media pack is a Marvel fan’s dream come true including Blu-ray, and digital copies of each of the films in Phase 2 of the MCU.

Once you get your hands on this collection you’ll be confused as to what to do first, watch the films, download digital copies or play with the sweet swag that accompanies the discs. You’ll have your choice of a Morag Orb containing one of the legendary Inifinity Stones, a gold-foiled page from the book of Dark Elves, an ancient drawing from the Morag vault, Avengers and S.T.R.I.K.E. uniform patches, a replica of the Tony Stark Tattoo from Marvel’s ‘Iron Man 3‘ and more.

This action-packed 13-disc collector’s set including an exclusive bonus disc, including never-before-seen deleted & extended scenes, the complete set of Marvel One-Shot films and commentary, from Here to Infinity: Phases 2 and 3 of the M.C.U., Tag scenes: A Making-of, Screen test with Chris Pratt and Dave Bautista and even more! You can pre-order the full set here. 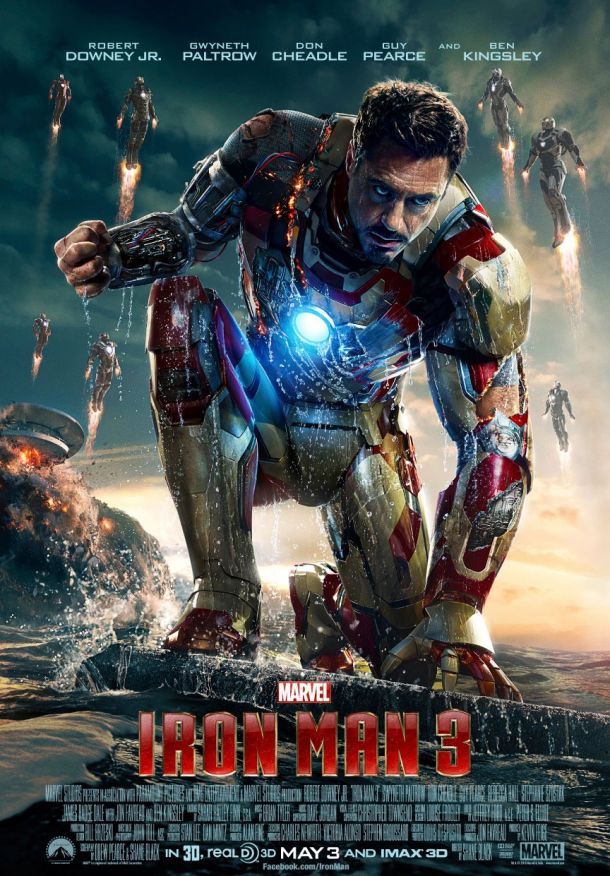 Marvel’s ‘Iron Man 3’ pits brash-but-brilliant industrialist Tony Stark/Iron Man against an enemy whose reach knows no bounds. When Stark finds his personal world destroyed at his enemy’s hands, he embarks on a harrowing quest to find those responsible. This journey, at every turn, will test his mettle. With his back against the wall, Stark is left to survive by his own devices, relying on his ingenuity and instincts to protect those closest to him. As he fights his way back, Stark discovers the answer to the question that has secretly haunted him: does the man make the suit or does the suit make the man?

You will get ‘Thor 2: The Dark World’

Thousands of years ago, a race of beings known as Dark Elves tried to send the universe into darkness by using a weapon known as the Aether. Warriors from Asgard stop them but their leader Malekith escapes to wait for another opportunity. The warriors find the Aether and since it cannot be destroyed, they try to hide it. In the present day, Jane Foster awaits the return of Thor although it has been two years since they last saw once another. In the meantime, Thor has been trying to bring peace to the nine realms. Jane discovers an anomaly similar to the one that brought Thor to Earth. She goes to investigate, finds a wormhole, and is sucked into it. Back on Asgard, Thor wishes to return to Earth but his father, Odin refuses to let him. Thor learns from Heimdall, who can see into all of the realms, that Jane disappeared. Thor then returns to Earth just as Jane reappears. However, when some policemen try to arrest her, an unknown energy repulses them. Thor then brings Jane to Asgard to find out what happened to her. When the energy is released again, they discover that when Jane disappeared, she crossed paths with the Aether and it entered her. Malekith, upon sensing that the time to strike is now, seeks out the Aether. He attacks Asgard and Thor’s mother Frigga is killed protecting Jane. Odin wants to keep Jane on Asgard so that Malekith will come. Thor disagrees with his plan, so with his cohorts, he decides to take Jane away. He enlists the aid of his brother, Loki. Unfortunately, Loki’s motivations remain unknown.

You will get ‘Captain America 2: The Winter Soldier’ 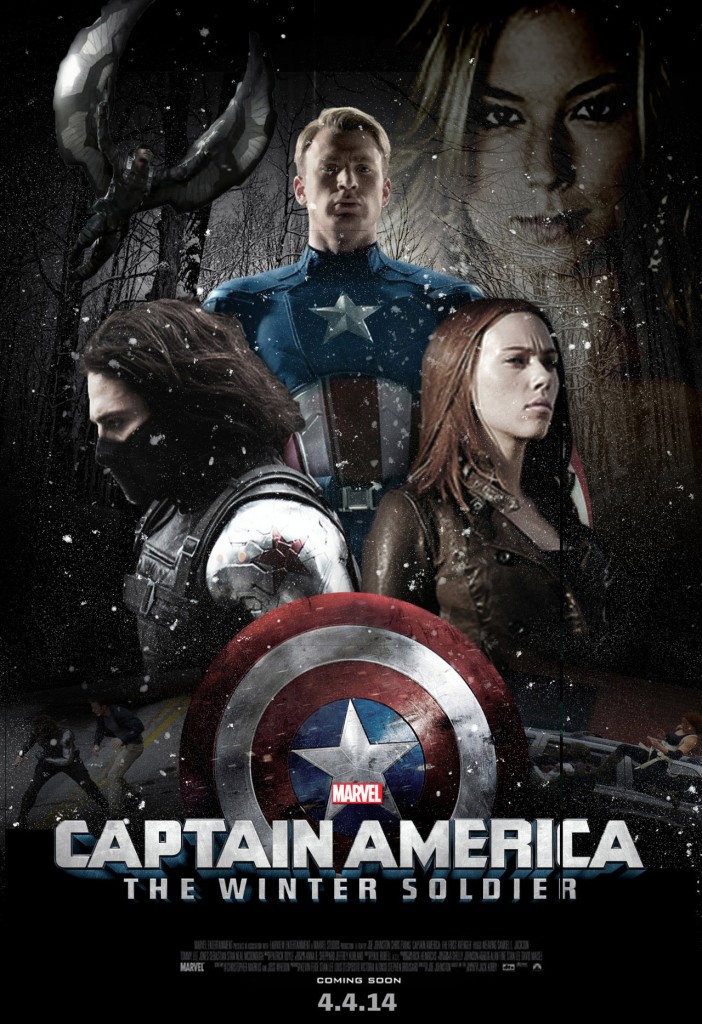 For Steve Rogers, awakening after decades of suspended animation involves more than catching up on pop culture; it also means that this old school idealist must face a world of subtler threats and difficult moral complexities. That becomes clear when Director Nick Fury is killed by the mysterious assassin, the Winter Soldier, but not before warning Rogers that SHIELD has been subverted by its enemies. When Rogers acts on Fury’s warning to trust no one there, he is branded as a traitor by the organization. Now a fugitive, Captain America must get to the bottom of this deadly mystery with the help of the Black Widow and his new friend, The Falcon. However, the battle will be costly for the Sentinel of Liberty, with Rogers finding enemies where he least expects them while learning that the Winter Soldier looks disturbingly familiar.

You will get ‘Guardians of the Galaxy’.

After stealing a mysterious orb in the far reaches of outer space, Peter Quill from Earth, is now the main target of a manhunt led by the villain known as Ronan the Accuser. To help fight Ronan and his team and save the galaxy from his power, Quill creates a team of space heroes known as the “Guardians of the Galaxy” to save the world.

You will get ‘Avengers 2: Age of Ultron’. 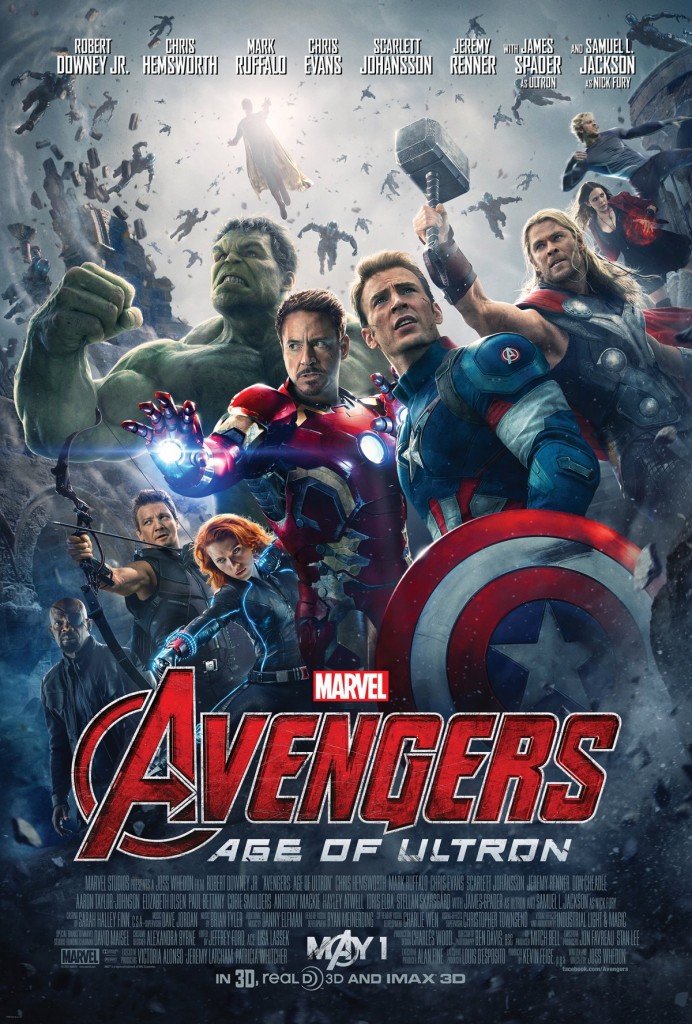 When Tony Stark tries to jumpstart a dormant peacekeeping program, things go awry and Earth’s Mightiest Heroes, including Iron Man, Captain America, Thor, the Incredible Hulk, Black Widow and Hawkeye, are put to the ultimate test as the fate of the planet hangs in the balance. As the villainous Ultron emerges, it is up to the Avengers to stop him from enacting his terrible plans, and soon uneasy alliances and unexpected action pave the way for a global adventure.

And you will get ‘Ant-Man’.

Armed with the astonishing ability to shrink in scale but increase in strength, con-man Scott Lang must embrace his inner-hero and help his mentor, Dr. Hank Pym, protect the secret behind his spectacular Ant-Man suit from a new generation of towering threats. Against seemingly insurmountable obstacles, Pym and Lang must plan and pull off a heist that will save the world.

Some of the bonus features this collector’s set offers are:

*Marvel One-Shot: A Funny Thing Happened On The Way To Thor’s Hammer  With Audio Commentary By Clark Gregg

*Marvel One-Shot: All Hail The King With Audio Commentary By Drew Pearce and Ben Kingsley

*Guardians of the Galaxy – Deleted Scenes

*Guardians of the Galaxy – Preproduction Creative