Are You Going Back? Because We Are – ‘Back To The Future’!!!

Are you a fan of the trilogy film series ‘Back to the Future‘? Are you going to be in Los Angeles October 21 – 25, 2015? Do you have an extra $800 to spend? If the answer to any of these questions is “yes” then you can be part of the 30th Anniversary celebration the celebrated trilogy entitled ‘We’re Going Back‘! This is a week-long event you will NOT want to miss if you’re a truly die-hard fan of all things time-travel, the 80’s, Michael J. Fox and Robert Zemeckis this should be your fall Mecca.

You can’t even imagine the events that are planned for this five-day uber-fan experience! It will blow your bloody mind! You will be joined by hundreds of the biggest ‘Back to the Future‘ Fans from all over the world for this incredible, once-in-a-lifetime encounter!

A Screening of Back to the Future II

Old West style BBQ dinner and a Screening of Back to the Future, Part III with surprises

An outdoor screening of Back to the Future III

Tour of the original filming locations from Back to the Future

Attend the world’s most accurate, immersive recreation of the iconic “Enchantment under the Sea” dance with the cast and crew of the trilogy and rock out with the “Flux Capacitors,” featuring Marvin Berry.

The most intimate, celebrity moderated, “Back to the Future” discussion panels and presentations

A screening of Back to the Future outside the “Twin Pines” mall, aka Puente Hills Mall in the City of Industry, CA, with celebrities, movie vehicles and the return of the “Flux Capacitors” band for a very special finale. 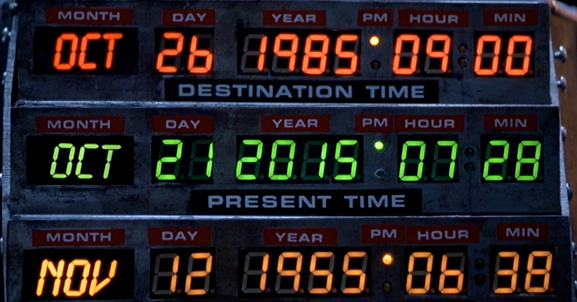 All this and more. Tickets cost $800 for the full 5 days, or you can purchase tickets to the individual days. WereGoingBack.com and BackToTheFuture.com have teamed up this year to make this one of the most immersive fan experience celebrations ever to be put together! They couldn’t have timed it more perfectly if they’d tried because as Doc Brown said “We’re descending toward Hill Valley, California, at 4:29pm on Wednesday, October 21st, 2015”. It’s almost like it’s predetermined!

In addition to everything else you could possibly imagine, the event has a special agreement with Universal Studios to create exclusive, officially licensed, limited edition products. This means if you’re a collector, it’s beyond the place to be to stock up on one-of-a-kind pieces that will never be in production again. It’s going to be an epic event and anyone, who’s anyone will be there!