San Diego Comic-Con gives us the latest and greatest in entertainment updates and today, the lucky fans that packed Hall H got to peep the first trailer for ‘Fear The Walking Dead‘. The series is a prequel to ‘Walking Dead‘, AMC’s runaway smash hit series which gives us a real-life look at what life might be like if zombies were real. 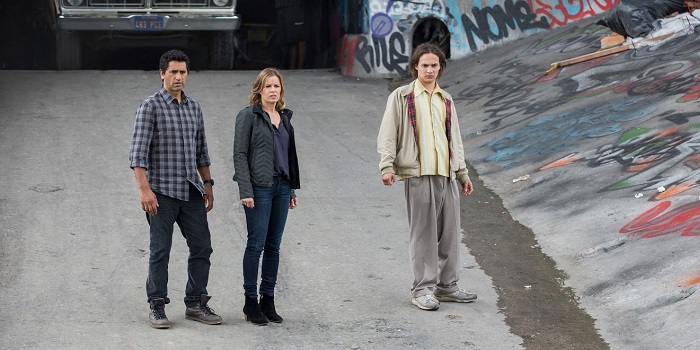 AMC revealed the trailer after their ‘Walking Dead‘ panel when exec producers took the stage to discuss the spinoff. They were also joined by cast members Cliff Curtis, Kim Dickens, Frank Dillane, Alycia Debnam-Carey, Elizabeth Rodriquez, Lorenzo James Henrie, Ruben Blades and Mercedes Mason. Gale Ann Hurd, Robert Kirkman, Dave Alpert and Greg Nicotero are the EP’s for the show and all but Kirkman were present to talk about the Los Angeles-set spinoff that promises to show us the early days of what becomes the zombie apocalypse and even though it’s based in LA, showrunner Dave Erikson told those gathered “By the end of the season, we get to see what happened to Atlanta.” Fans were also promised a debut of August 23 with a 90-minute episode. What do you think about the show, do we have too many, have zombies permeated TV and film too much, who’s going to be watching? Sound off in the comments.