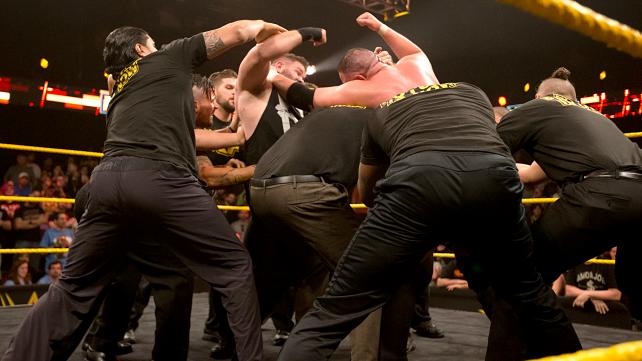 The air was electric in at Full Sail University as WWE’s NXT (which can be seen on the WWE Network FREE for new subscribers in June, and $9.99 for the rest of us) kicked off. Last week, a match was made that everyone in the NXT Universe was chomping at the bit to see. But that is not the only thing that happened. The NXT Tag Team Champions saw action as well as former NXT Women’s Champion, Charlotte. In a night that promised intensity, NXT delivered. Did you miss it? Find out what happened now! 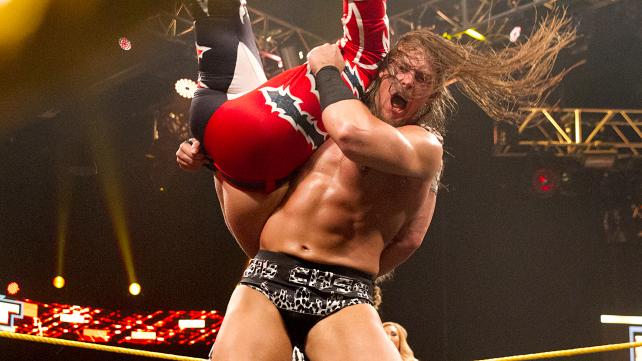 What better way to open the show than with a 6 person tag match involving the Realest Guys in the Room and the Princess of Staten Island vs the NXT Tag Team Champion and Alexa Bliss? An all out brawl began before the bell rang and when the smoke cleared it was Big Cass, Carmella and Enzo who had control of the ring while Murphy, Blake, and Bliss glared up at them from the out side. When the bell finally did ring it was Enzo who started the match for his team and both Blake and Murphy did a great job of isolating him on their half of the ring. Quick tags and cheap shots were the name of the game. Even Miss Sparkle got in a few shots of her own in an effort to keep Amore down and in their corner.

But like the scrapy fighter he is, Enzo battled back and was able to make the tag to Carmella. This brought in Alexa (cuz girls fight girls, guys fight guys). The hottest diva in the ring dominated he opponent easily. Alexa quickly made the tag to Blake in an effort to escape the brutal beat down and this brought in Big Cass who destroyed that half of the NXT Tag Team Champions. His strength and size and speed ended up being the deciding factor in the match and with a tag to Enzo and a top rope splash to a prone Blake, they picked up the win.

So while I knew the 6 person tag was coming, it was still a fun match. The bad blood between these teams is getting thicker with each shot across the bow. One week Blake and Murphy get the upper hand with Alexa, the next it’s Enzo, Cass and Carmella. This back and forth is making for a beautiful feud that is taking the NXT Tag Team division by storm. Not only is there a huge fight brewing between the guys, but the ladies are going to rip each other apart next they face off in singles action. Things are picking up and the NXT Universe are the ones who benefit. With this win over the champions, it sets Amore and Cassady back up as the #1 contenders. Perhaps another championship match is in order? 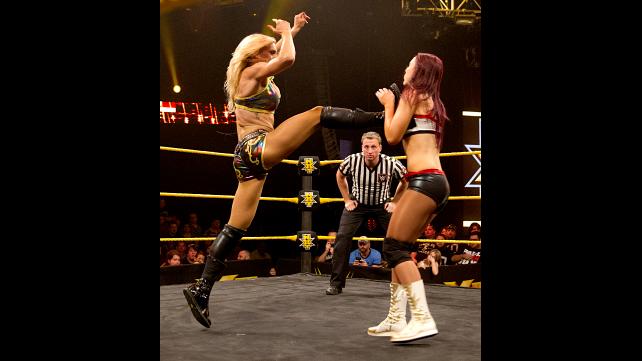 Next up was Charlotte taking on new comer, Cassie. One would expect it to be an easy win for the former NXT Women’s Champion, but the Aussie was no push over. She took the fight straight to the her genetically superior opponent and scored a few pin fall attempts and landed some impressive moves in the first half of the match. But Charlotte took control and schooled the newblet. A massive spear set Charlotte up perfectly to lock in her Figure 8 submission (a figure 4 with a bridge) to pick up the victory via submission.

Love me some NXT Women’s wrestling. And any time Charlotte is in the ring, one knows it’s going to be good. The win over Cassie gives her great momentum heading into this feud with Dana Brooke. The Australian, Cassie looked great. She looks like she belongs in the ring. I am excited to see what else she has to offer as a competitor. If her first 2 matches are any indication, the NXT Universe can expect great things from her. 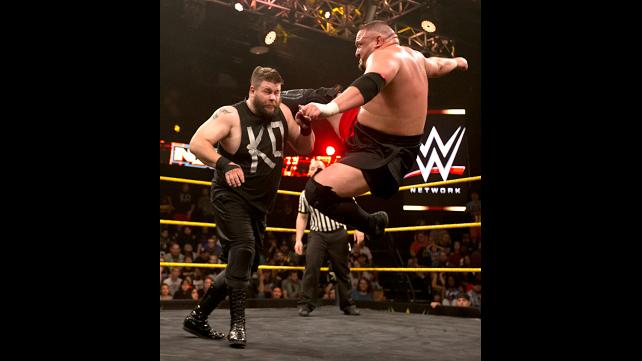 This fight has been brewing for weeks. And the NXT Universe finally got to witness what it has been craving since Samoa Joe made his debut. From the first bell things were a new level of intense. Kevin attempted his usual mental game of rolling from the ring as soon as the bell rang, but Joe was on him, not buying into it. The two got back in the ring and the fight was on!

Joe quickly showed how dangerous he was when he began to lay on the fast hard body shots onto the NXT Champion keeping him on the defensive. But it was an enziguri to Owens that really shocked those watching. The offensive beating continued and Kevin was forced to regroup to the outside. When Joe followed him once more, Owens suckered him in feigning weakness. The NXT Champion took control and looked as if he was about to deliver the powerbomb to the ring apron that sent so many others out on a stretcher.

Joe however, had other plans. He countered and the fight returned to the ring. Here’s where things get off. Somehow in all the fighting and destroying of one another, the ref got caught in the middle and then called the fight when he couldn’t get the two men separated. Well Kevin and Joe wouldn’t let a little thing like the match ending stop the fight they had going and continued to lay into one another with vicious punches. This brought out more officials and security in an attempt to break the men apart. It worked briefly till Owens broke free and pounced on Samoa Joe. Separated once more, Joe broke free and returned the favor. Again the mass of men was able to separate the two men and Kevin Owens thanked two of the guys holding him back by laying them out with an elbow and a punch to the face.  The NXT Champion did retreat up the ramp and left Samoa Joe in the ring .

I have never seen Kevin Owens so equally matched by another guy who is as deceptively agile. I don’t think Kevin was expecting this kinda fight from the man as he looked totally unprepared. Joe dominated a good portion of the match. He would not be intimidated by the normal tactics that Owens used against his previous opponents. There should definitely be a round two to this.  So much left unfinished. No clean finish. Next time though, I doubt it will go the same way. Now that Owens knows what to expect from the So Cal native, I have a feeling that Kevin will show Joe what it means to step in the ring with the man who destroyed Sami Zayn, Adrian Neville, and Alex Riley.