Blu-ray News: ‘Army of Darkness’ From Scream Factory in October! 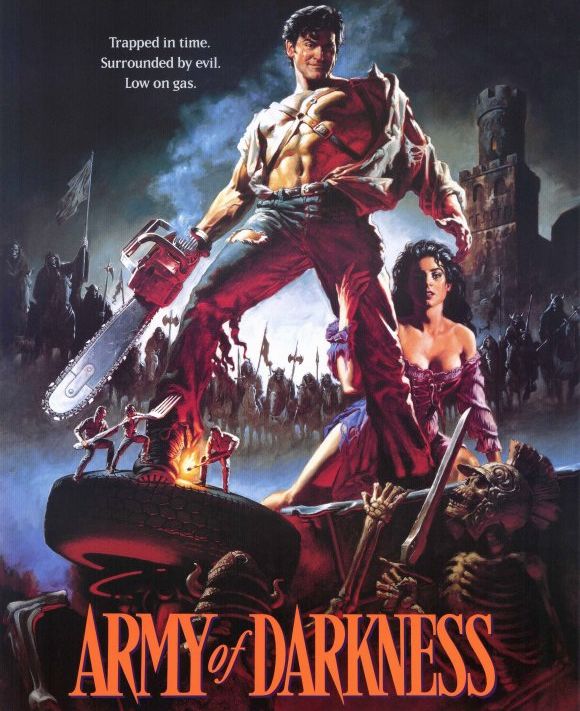 Most of you already know that my favorite movie of all time is in fact ‘Army of Darkness‘. It has been my favorite movie since I first saw it back in 1993 where I thought Bruce Campbell could do no wrong. He still hasn’t. ‘Army of Darkness‘ just has everything you’d ever want in a movie, whether it be thrills, chills, one-liners, romance, a chainsaw, or a boomstick. Hell, I even named my comic book store in Dallas, Boomstick Comics after the film. Needless to say, my house is packed with signed posters, books, action figures, and literally every VHS, DVD, and Blu-release of this movie. I think I own this movie and the other ‘Evil Dead‘ films 20 times over now.

There have been numerous editions of the ‘Evil Dead‘ films, including ‘Army of Darkness‘.  There have been numbered double discs with the famed alternate ending. There have been bootleg editions, necronomicon skin bound editions, and even ones that have called themselves Ultimate editions. Each release has come with different artwork and a variety of extras. It’s known that Bruce Campbell commentary is legendary and down right hilarious, which you can listen to on these films and laugh your ass off to. I won’t even mention the vast array of behind the scenes features, deleted scenes, and make up effects extras that come with each release.

Today, the good folks over at Scream Factory, a branch of Shout Factory, told their Facebook fans that they will indeed release a new version of ‘Army of Darkness‘ on Blu-ray. They said it will be the most definitive version to own to date, which is quite a statement, considering the wealth of bonus features they need to include. That being said, I believe Scream Factory is up to the task with their recent work of putting out past horror movies with new and improved video and audio transfers and new extras to entertain. Their work in this area has been fantastic, which is why I think Scream Factory is up to the task with this monumental release.

The only thing we know now is that there will be new artwork for the box art and the pre-orders will start next month with  a release date in October. Just in time for Halloween. Going by previous Scream Factory releases and the upcoming new TV show ‘Ash vs. Evil Dead‘ that will premiere on Starz, starring Bruce Campbell, I can expect new interviews with everyone involved, and hopefully a new commentary track with Campbell and director Sam Raimi. I also hope to see the previous extras imported over here, along with a few new ones.

We will definitely update you when we have the full list of extras and specs for this Blu-ray release, but until then, I think we can all say ‘GROOVY’ in unison with this news.