Neil Gaiman is one of those authors that everyone has heard of and most everyone that reads him, likes what they find. I was a little late to the Gaiman party only getting interested in his work in the last few years, the one thing I didn’t read when I began my Gaiman journey was ‘American Gods‘. Oh mon dieu! I corrected the error of my ways after our Editor-in-Chief, Bryan couldn’t believe I hadn’t read it, yet. Ironically, I was putting together an article on books that should be made into film and this was his suggestion.  I spent a weekend with the tome and fell in love and agreement, this book SHOULD have a film counterpart. The universe responded with wish granted. 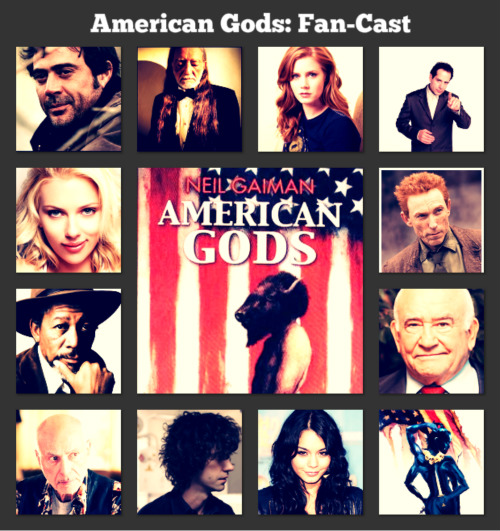 Starz is playing the part of a fairy godmother by moving forward with a series adaptation of the multi-award winning story. Bryan Fuller and Michael Green are writing the adaptation, executive producing and acting as all-over showrunners. Gaiman will share an exec producing credit, as well.

If you’re unfamiliar with the story-line, I’ll give you a brief synopsis. Shadow has a haunted past and wants to blend into the backdrop with his wife and lead a quiet life. This sounds like a great plan until he learns his wife has been killed in an accident. Shadow flies home for the funeral and meets a strange man in the seat next to him, calling himself Mr. Wednesday. Mr. Wednesday has more than a little mystical charm around him beginning with the intimate details of Shadow’s life he seems to know too well. Shadow begins working for Mr. Wednesday as they travel the country to meet up with a rag-tag bunch of Mr. Wednesday’s associates. They begin preparing for a giant storm which places Shadow right in the nucleus.

Now that the behind-the-scenes players are in place, it’s time to begin casting the epic. This will surely be a touchy time as fans have their vision of who Shadow is, who Wednesday looks like and I’m no different. With Gaiman involved, I’m positive the absolute best actor will get the job. There are fan suggestions from Jeffrey Dean Morgan to Jason Momoa for Shadow and an even wider range for Mr. Wednesday with one vote for Willie Nelson!  Starz is hoping to appease fans when it comes to casting by letting them weigh in on who should play Shadow. Now you can go to your favorite social-media platform and use hashtag #CastingShadow to let your voice be heard. “We hope to create a series that honors the book and does right by the fans, who have been casting it in their minds for years,” Starz CEO Chris Albrecht said.

“I am thrilled, ‎scared, delighted, nervous and a ball of glorious anticipation. The team that is going to bring the world of ‘American Gods’ to the screen has been assembled like the master criminals in a caper movie: I’m relieved and confident that my baby is in good hands. Now we finally move to the exciting business that fans have been doing for the last dozen years: casting our Shadow, our Wednesday, our Laura,” Gaiman said.

“Almost 15 years ago, Neil Gaiman filled a toy box with gods and magic, and we are thrilled to finally crack it open and play. We’re grateful to have Starz above us and FremantleMedia at our backs as we appease the gods, American or otherwise,” Fuller and Green said in a statement.  I may say, there are some very interesting characters in the book that I can’t wait to see reproduced in the film world, when what I really meant was “Do we get to see a god eat a man with her vagina?!”