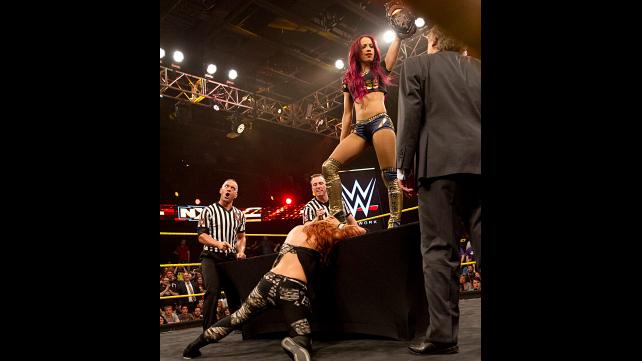 It was yet another exciting night on WWE’s NXT (seen on the WWE Network FREE for the month of May) as the Superstars of Tomorrow continued on their way to NXT Takeover: Unstoppable. The night saw tensions rise as the NXT Women’s Championship match was made official, the NXT Tag Team Champions taught their number one contenders not to take them lightly and Prince Pretty attempted to extinguish the fighting spirit of Hideo Itami. Did you miss the most exciting show on Wednesday night? Find out everything that transpired now!

The night began with former NXT Women’s Champion, Charlotte going one on one with Emma. It was a more competitive match than I gave it credit for at first. Charlotte appeared to have everything in hand but then the Aussie turned the tables and began to work on taking out the genetically superior divas leg. The two would continue to trade moves as eventually Emma was just out classed and out wrestled. Charlotte hit her Natural Selection to put the disillusioned Diva out of her misery.

After the match, Bayley came down to the ring to confront Emma for her disrespect. It appeared that all would be well as the two friends hugged, but Bayley had other intentions as she delivered her Bayley-to-Belly suplex and then proceeded to open a can of whoop ass on her former friend. Charlotte pulled Bayley off of Emma and all seemed well till once again Bayley pounced, but this time to retrieve her head bands and shirt off of the beaten Aussie. Charlotte once again separated the two and pulled Bayley from the ring.

How fun is this?? Emma, disillusioned from her time on the main roster has come back and has chosen the wrong person to try and play head games with. She wouldn’t be the first of Bayley’s friends to take advantage of her, and frankly I think Bayley is over getting screwed over. All that frustration at not being able to count on her friends is going to boil over and Emma is going to pay the price as all of the new found aggression is directed toward her. I so would not want to be Emma right now.She has no idea the monster that has awoken in Bayley. I for one am eager to see just how dark the happy go lucky Bayley can get.

This match got me all giddy. Bull Dempsey vs Rhyno was sure to be amazing as they are two of the hardest hitting and powerful forces in NXT. What we got was Bull attempting to take on the Man Beast and eating a Gore for his time. It was most impressive to see Rhyno throw Bull around like he was a cruiser weight though. I might have giggled a tiny bit.

But the real story here is what happened after the match. The Wrestling Gods have listen to my prayers and Rhyno challenged the Lone Wolf of NXT to a match at TakeOver. Baron Corbin has yet to respond but how can he deny such an opportunity to show how dominate he potentially is? He can’t and the match will be amazing!

To continue to build momentum toward their NXT Tag Team Title match, Enzo Amore and Colin Cassady were set to take on Scott Dawson & Dash Wilder. However, the match never took place. Their opponents arrived in the ring, but when the Realest Guys in the room’s music hit they were no where to be found. What did happen was, Murphy and Blake ambushed their number one contenders in the back while Carmella screeched at them to stop. They didn’t and the NXT Tag Team Champions beat down Enzo & Cas that rendered them unable to compete.

Gotta give it to Murphy and Blake. Didn’t think they had it in them to do something like this. It was a nice surprise. Sure I like Enzo and Cas, but it appears they took their opponents lightly and didn’t see this coming either. They learned a very valuable lesson in respect of what the champions will do in order to gain any advantage to secure the win and retain their titles. 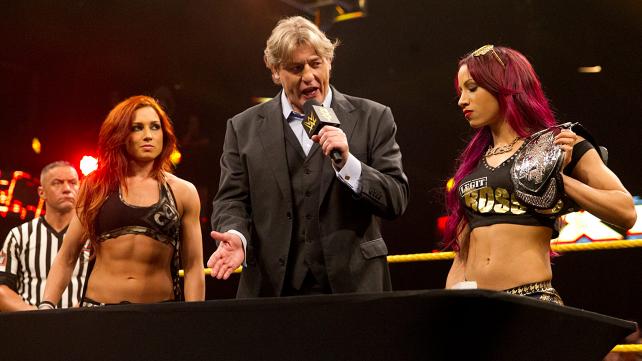 As contract signings go, this one ended exactly how we expected. The ladies got the contract signed after they both had a turn at the microphone and boasted how they were going to walk away from TakeOver the champion. Sasha clearly did not care what her former Team B.A.E member had gone through or the dues she paid to get to the match as after she signed the contract (with a stamp, like the Boss she is) she threw the contract at Becky and then proceeded to slam her into the table and stepping on her head to show dominance over the challenger. Becky however would not let something like that stand as she turned the tables on the NXT Women’s Champion and locked in a viscous arm bar to show she was just as dangerous as Banks. The Baddest Diva in NXT tapped! The officials separated the two and the match at TakeOver is official.

Oh this match is going to be amazing. I am still hoping it becomes a submission match. Both women are proficient in submissions and it just seems appropriate. Becky has yet to be tested as most saw her as not much competition last week or even a contender for the NXT Women’s title. But she has proven that not only is she a contender but a threat to Banks’ title. The Boss on the other hand is not going to give that title up with out a fight. She worked hard to take it away from Charlotte and in her mind she sees it as validation of her spot as queen. The battle between these two is going to be a contender for match of the night for sure in two weeks. 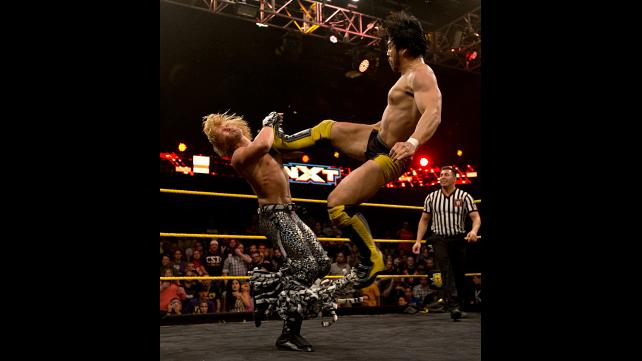 With Finn Balor observing the match from ring side, Hideo Itami took on Tyler Breeze in singles competition. The two locked up and jockeyed for control. With neither one gaining the advantage, Breeze constantly rolled to the outside when ever it appeared that Itami was building momentum. His strategy was to avoid the powerful kicks from the angry Japanese man. It worked as Prince Pretty was able to surprise Hideo with a kick of his own and take control of the match.

From there is was a back and forth battle as the two traded moves and countered others showing just how well they had grown to know each other as competitors. Breeze gained a measure of offensive momentum but Itami’s fighting spirit refused to let him give up and he battled back with his lightning fast strikes with his hands and feet and knocked the Mayor of Cuteville to the floor. Hideo followed his prey and looked to finish him with a huge kick, but Breeze moved at the last second and Hideo ended up kicking Balor through the barricade.

Unable to fret over the mistake Hideo followed Tyler back into the ring and avoided a Beauty Shot. Itami did however land a Shotgun Kick to pick up the win. As he looked at Finn (who had risen to his feet after recovering from the kick from his friend) Hideo appeared to be apologizing for his earlier mistake. Breeze attacked Itami from behind and Finn rushed in to pull Prince Pretty off of his friend.

As Hideo and Finn stared each other down almost looking like they were going to come to blows, Tyler Breeze demanded to be shown respect as he Supermodel Kicked Hideo and gave a Beauty Shot to Balor. Breeze stood tall in the end over the two men he would be facing at NXT TakeOver: Unstoppable to determine who would be the Number One contender to Kevin Owens’ NXT Championship.

The match it self was slow at first but that is exactly how it was meant to be. Tyler knew that once Hideo got going with those kicks of his that it would be over all too quickly. He knows better than to take Itami lightly in the ring. They have faced each other numerous times and he understands The Angry Japanese Man’s strengths. Hideo on the other hand showed a slightly different side to himself that we, the NXT Universe had yet to see. In the match he mocked Tyler by tapping him with his foot and then parting his hair and posing. It was funny.

The triple threat match between these three men is completely up in the air with no favorite. All three men have momentum going into this so far and even though Finn and Hideo ended up on their backs to end the night, they are still riding the momentum wave. This did however show case Tyler as a threat and evened the playing field. Can’t wait to see how else things progress leading into the next TakeOver.