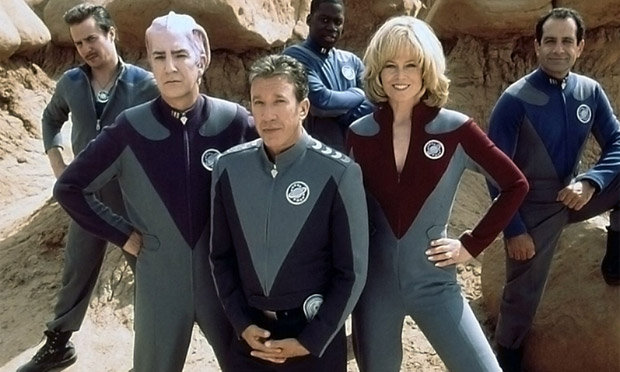 Was there a better spoof comedy in 1999 than ‘Galaxy Quest‘? I’m gonna go ahead and say there wasn’t and Quest was the greatest thing since ‘Spaceballs‘. As far as space spoofs go, it was killer and it helped that Tim Allen starred. In the 90’s I was addicted to ‘Home Improvement‘ and couldn’t get enough of the comedian. I actually read both of his books and watched every show in syndication so many times that I could quote them in my sleep. With my love of Allen, it was a given I had to watch ‘Galaxy Quest‘, the bonus part was, it was an epic movie on its own!

Now the awesomeness of ‘Galaxy Quest‘ is coming to the small screen! Paramount Television is using the DreamWorks pic as a launching pad for a series with a built-in fan base. The film features the characters from a long-cancelled TV show, kind of like ‘Star Trek‘, and the cast becomes reluctant space heroes when they board a spaceship and are tasked with saving an alien race. Besides Allen, Sigourney Weaver, Alan Rickman, Tony Shalhoub, Sam Rockwell and a young Justin Long were all key players in the movie.

Paramount is bringing GQ film writer, Robert Gordon, Dean Parisot and producer Mark Johnson back for the adaptation. This is kind of the studio’s go-to formula for turning movies into series, they bring at least one key person from the film to the transition. It was true with ‘School of Rock‘, ‘Shooter‘ and ‘Shutter Island‘.