Prepare To Get Freaked With The Trailer For ‘Insidious 3’!!! 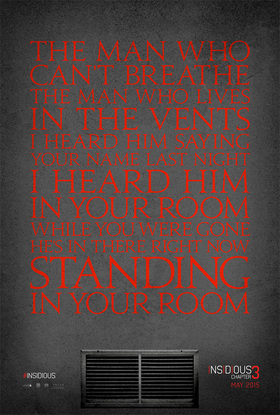 If you became a simpering, sissified, fraidy cat when you tried to watch the first two ‘Insidious‘ movies, I’d prepare for more of the same with the next installment. We’re bringing you the brand-spanking-new trailer for the epic horror franchise from Blumhouse Productions.

This is the freshman effort from newbie director Leigh Wannell, also known as Specs from the first two ‘Insidious’ films, and he’s taking the reigns from veteran helmer James Wan that directed the first two films to absolute success. This film takes place before the Lambert family encounters a host of evil and shows a gifted psychic, Elise Rainier, and her reluctant agreement to contact the dead in order to help a teenage girl targeted by a dangerous supernatural entity. Check out the trailer and get excited for the pic which bows on June 5, 2015.