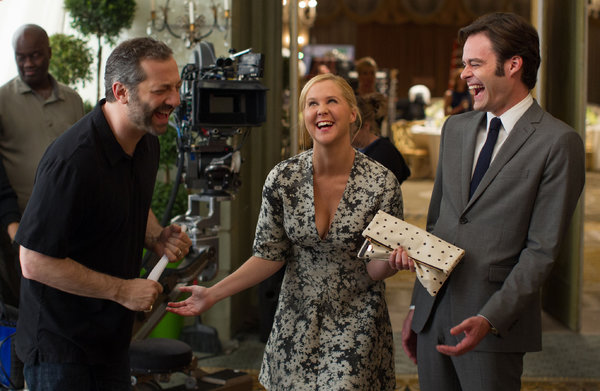 The guy who brought us ‘The 40 Year Old Virgin‘, ‘Knocked Up‘, and ‘Funny People‘ has a new film called ‘Trainwreck‘. Yes, Judd Apatow is back in the director’s seat again, this time with the beautiful comedienne Amy Schumer in the lead role. Apatow has really evolved as a filmmaker since ‘The 40 Year Old Virgin‘ in telling better and more personal stories of relationships, but still having those hilarious dick jokes and gross-out gags to make us belly laugh.

‘Trainwreck‘ follows a successful magazine writer (Schumer) who can’t seem to get enough of one-night stands. Seems like she is with a different guy every night of the week. That is until she meets a nice doctor (Bill Hader), whom she might be falling for. At least that is what we see now.  Colin Quinn, Vanessa Bayer, Brie Larson, LeBron James, Tilda Swinton, Daniel Radcliffe, Marisa Tomei, Ezra Miller, Mike Birbiglia, and even John Cena from the WWE show up in the trailer. And I must say, Cena kills it here.

The film comes out July 17th and I’m sure it will be good. Enjoy the trailer.