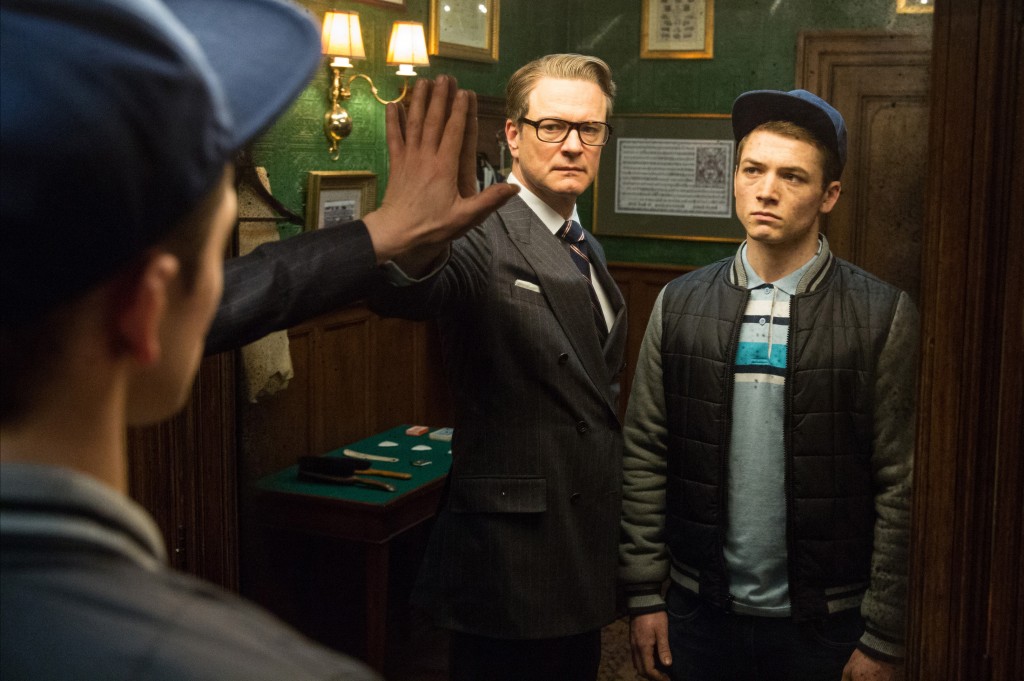 I can officially say that the first AWESOME, kick-ass movie of 2015 is finally here, which is ‘Kingsman: The Secret Service‘. Based on Mark Millar’s (Kick-Ass) comic book, director Matthew Vaughn (Kick-Ass, Layer Cake, Snatch) has once again delivered the goods and high entertainment value with an homage to spy films, particularly the ‘James Bond‘ franchise. So what’s that mean? It means the guy who made ‘Kick-Ass‘ and produced ‘Snatch‘, made his own version of ‘James Bond‘, and it’s as violent and gory and funny as his other films I mentioned.

What works so well with ‘Kingsman: The Secret Service‘, besides the fun acting, incredible fight choreography, stunning camera work, and over-the-top characters, is that it’s self-aware of exactly the type of movie it is and wants to be. It even goes so far as to mention the 007 agent a few times and talk about the usual spy genre movie tropes and how this is completely different, which of course it is. I only wish I could go back and watch this for the first time all over again.

There isn’t anything really new here as far as story goes, but how it’s executed and delivered is as fresh as the morning snow. In London, there is a super secret service, made up of highly trained and intelligent people called the ‘Kingsman’, which on the outside is a storefront for very fashionable clothing, but is rather a spy agency that comes with all the fancy weapons and gadgets. This elite group is headed up by Arthur King (Michael Caine), and we center on one of the agents named Harry (Colin Firth). As this group tours the world, stopping bad guys, it’s bound to happen that some super agents will bite the dust, hence a need for new recruits.

This is where a young man named Eggsy (Taron Egerton) steps in as a new recruit and has a forgotten relationship with Harry. A good chunk of the film is spent in a dangerous and highly entertaining training camp sequence where Eggsy along with other possible recruits try to attain the role of Kingsman. These training sequences put Navy SEALS boot camp to shame. Meanwhile, a billionaire guy named Richmond Valentine (Samuel L. Jackson with a hilarious lisp) has invented a microchip to make the internet and phone calls free for everyone. In fact, the microchip is free itself and available to the everyone, everywhere. But Valentine has a secret diabolical plan in play with these microchips that just might kill everyone on Earth. 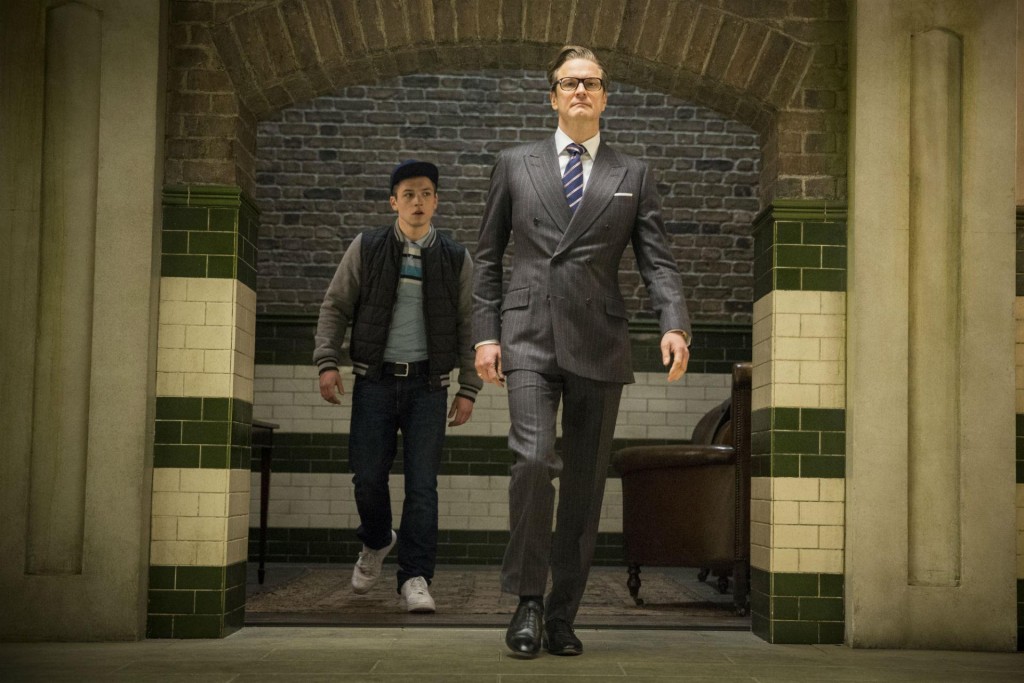 So now the Kingsman must step up to the plate and prevent this from happening, and needless to say, shit hits the fan in the most gruesome and fun way imaginable. Some of you might think Colin Firth is not the right man for a character who can kick anyone’s ass in two seconds or chop a dozen heads off in one swing, but I’m here to tell you that you’re completely wrong. Firth is a badass, period. He owns this role with strong charisma, wit, and elegance. It’s like if his older roles from some period romance project he did, finally grew a pair of giant balls and found an underground arsenal of giant guns and was programmed to kill anything and anyone in matter of seconds.

That’s how Firth plays this role, and I couldn’t get enough of him. Taron Egerton does a great job here too as the punk kid with a bad home life with a heart of gold, who changes his tune and becomes the person he was supposed to be. And boy, is he rewarded at the end of the film too for his accomplishments. Unfortunately, there are not any snakes or sharks here for Samuel L. Jackson to be afraid of, but lucky for us, this is a highly energetic and flamboyant role for Jackson, unlike anything we’ve ever seen him in. His lis is golden and hilarious, his fear of blood, vomit, and violence causes huge belly laughs, and his love for McDonald’s hamburgers and fries hit all the right notes. It’s the classic over-the-top James Bond villain here, and Jackson played him perfectly. 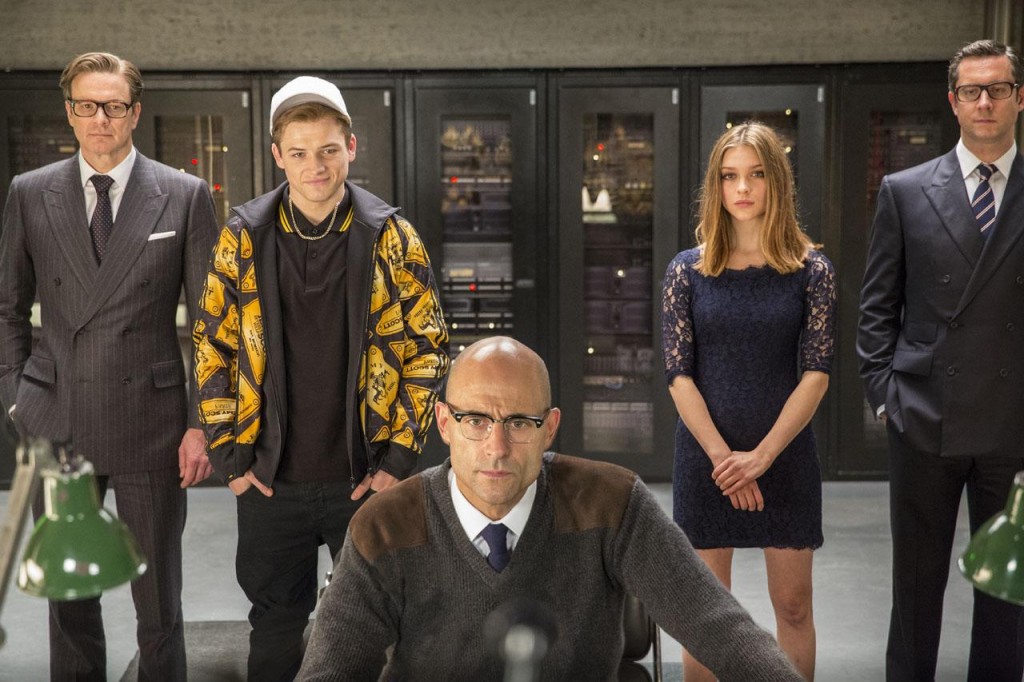 And if you’re a fan of the fight scenes from ‘Kick-Ass‘, meaning the no-cut, one-shot camera movement to capture all the decapitations, blood, kicks, and punches, then you’ll greatly enjoy the fight choreography here. ‘Kingsman: The Secret Service‘ is completely badass and probably the most fun you’ll have with a film this early on in the year.