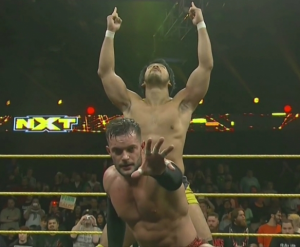 What is the best way to begin an outstanding and memorable 2015? Why with an explosive installment of WWE’s developmental brand, NXT.  Each superstar was fired up and ready to showcase their abilities to start the New Year off with a bang. Headlining rematches and rivalries about to hit critical mass were the order of the evening. How would day one of 2015 treat the Superstars of tomorrow? Let’s pop the cork on this bottle of awesomeness and dive on into NXT 1/1/15! 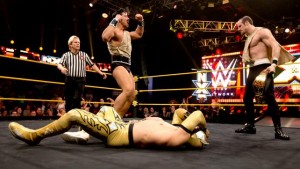 Winner: The Lucha Dragons via pinfall

Kalisto started things off in this non-title bout and looked strong with his high flying aerial abilities. Tye Dillengar and Jason Jordan, however, were able take control from one half of the tag champs with their strength and size. Dillengar, took great delight in mocking his opponents and a series of quick tags kept Tye and Jason in firm control as they worked to keep Kalisto grounded. However, the small Luchador’s incredible speed gave him the ability to create enough distance to make the tag that brought in Sin Cara, who kept the offense in the Lucha Dragons corner. The end came when Sin Cara hit a sun set bomb for the pin on Tye Dillinger.

As the tag champions celebrated their victory, The Vaudevillians arrived and in a very manly manor, taught those Dragons, that while they may have won the battle at R Evolution, they most certainly did not win the war.  The heroic Simon Gotch and Aiden English, showed the Lucha Dragons what team work was as they hit a Whirling Dervish (for those of you who don’t know, it is Simon upper cutting his opponent and Aiden following up with a running neck breaker.) on Kalisto. With the example made, the proud Vaudevillans returned to the locker room.

The feud between the two teams continues to build to a crescendo as Simon Gotch and Aiden English have a very valid point. At the live special, the wrong man was pinned to end the match. They were robbed and are understandably upset. It is only fitting that their frustrations be taken out on the team that wronged them. Honor demands that the Lucha Dragons are made to defend the tag titles once more. It is only a matter of time before the tag titles are around the waists of two men who know a thing or two about what is chivalrous and true. 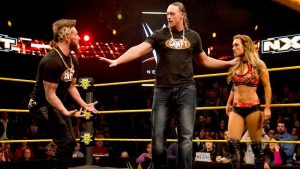 Enzo Amore and Big Cass accompanied Carmella to the ring for her match against the local competitor only known as, Blue Pants. The NXT Universe was firmly behind Blue Pants even before the seven footer’s playful introduction (something that the Princess of Staten Island was none too pleased to hear.) Carmella took her frustration out on the upstart challenger showing the Blue one just what it meant to step into the ring with her for a third time. Everything was well in hand with Carmella  dominating her challenger till Enzo appeared on the ring apron attempting to give advice where, clearly, none was needed. This distraction allowed, Blue pants to roll Carmella up for the surprise pin.

The victory wasn’t the only thing upset, as a very pissed off Carmella rightfully attacked Enzo for costing her the match. Not even Big Cass was able to keep her off of the smaller man as she then proceeded to chase Amore around the ring. Cooler heads eventually prevailed as she gave up the chase. This match was not what I expect from the NXT ladies. Granted it wasn’t given much time and had to be quick, but Carmella could have done more to showcase her skills. While I love trash talk and show boating as much as the next chick (stepping on the hair was priceless) I really want to see what else the Hottest chick in the Ring can do.  Blue Pants looked good tonight. She fed off the crowd and picked up a win on her own, Sami Zayn inspired, Road to Redemption.  Also, LOVE that her music is Big Cass singing the Price is Right Theme. Anyway WWE can make that a permanent thing? 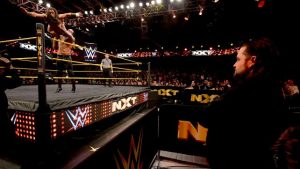 As typical of a Baron Corbin match, if you blinked you missed it. But that doesn’t mean it wasn’t exciting. Everyone’s favorite angry hippie was fully charged in his attempt to try and finally beat Corbin. But even with the distraction of Bull Dempsey in the crowd, it only took Baron 3 moves, a snake eyes, big boot, and End of Days, and the Moonchild was seeing stars (You can break his sign, but not his spirit dammit!)

Rather than celebrate the victory, NXT’s Lone Wolf, picked up a microphone and issued a challenge to the New York Nightmare. But rather wait for an answer, Baron took the fight to Bull as he pulled him over the railing and proceeded to begin the beat down. But Dempsey was not like every other person Corbin has toyed with. Bull matched Corbin blow for blow as referees pulled them apart. Bull Dempsey was herded to the back and Baron Corbin claimed the ring. He continued to yell his challenges to Bull, begging him to fight.

The ever vocal, NXT crowd, showed their approval of the happenings by insisting that the officials “Let Them Fight!” So I know im not the only one chomping at the bit to see these two lock horns and finally see who the most dominant man is in NXT. Both have a made a name squashing any who enter the squared circle with them. And finally Baron would get his wish of fighting someone who would test his abilities. Is he as good as he thinks he is? Bull Dempsey has the answer. And vice versa.

The NXT Women’s Champion addressed the NXT Universe. She said that Sasha banks was one of the most difficult competitors but that she had beaten her twice. The Boss, with Becky Lynch, arrived on the scene and informed Charlotte that while she had been beat twice, the Champion was about to receive a beat down. Just as Becky and Sasha were about to double team the Genetically Superior Diva, Natalya’s music hits and everyone goes wild. She slides into the ring and her very presence is enough to make Banks and Lynch think twice about entering. The two retreat leaving the female legacies of the Hart and Flair family to embrace in the ring, much to the crowds delight.

I can totally see this tag match happening. Sash Banks and Becky Lynch vs Charlotte and Natalya!  NXT I revolutionizing Women’s wrestling and these four women are some of the best that WWE has to offer from either brand. Anyone who is a fan, or even a passing newb to the art form that is Sports Entertainment, would be able to relish and enjoy the offering that would be the match these women would provide. In a complete pipedream from my twisted little soul, I could even see a fatal four way for the NXT Women’s title featuring Charlotte, Natalya, Sasha, and Becky. WWE you have my permission to make this happen. 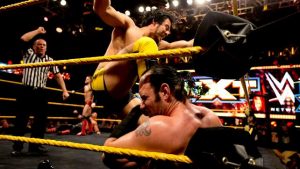 The rematch we have all been waiting on began as we expected it to. It began with all four men in the ring tearing each other apart. It looked as if, my beloved Ascension would become victims of the double corner drop kick once more, but Konor and Viktor rolled out of the ring before the devastating maneuver could come to fruition. After regrouping, Viktor faced off against the demonic Irishman to start. It was a rough beginning for the former tag champion as Balor and Itami governed the pace of the match. That is until Viktor landed  a huge upper cut to Finn as he was perched on the ring apron. The move dropped Finn to the outside, slowing things down.

Viktor trapped the Irishman on the Ascension side of things and made a tag to Konor who picked up the abuse where his partner had left off. The viscous stomps delivered, further wore down Balor, and put him in desperate need to make a tag to his partner. It was a quick Pele kick delivered to Konor that allowed Balor to tag in Hideo. However, Viktor was also tagged in, giving both teams the fresh man. But it was all the angry Japanese man who would take offensive control and he looked as if he could handle both members of the Ascension on his own, but a huge STO from Viktor put Hideo on the mat.

Frustration at not being able to pin either Finn or Hideo began to take its toll on the Ascension boys as they began to make mistakes. That allowed a huge big spin kick from Hideo to a kneeling Viktor allowed Itami to pick up the come from behind victory. It was a hard fought battle that produced moments that were both cringed at and cheered. One thing is for sure, Hideo Itami and Finn Balor have arrived. The match was a lot of fun. It was a back and forth roller coaster of high risk offense and merciless power moves that blended beautifully. I loathed to see the Ascension pinned (again…), but they beat themselves. They let their frustration get the better of them and Hideo and Finn took advantage. Great match with amazing talent. Is this truly over between them? Most likely, but it was fun while it lasted.