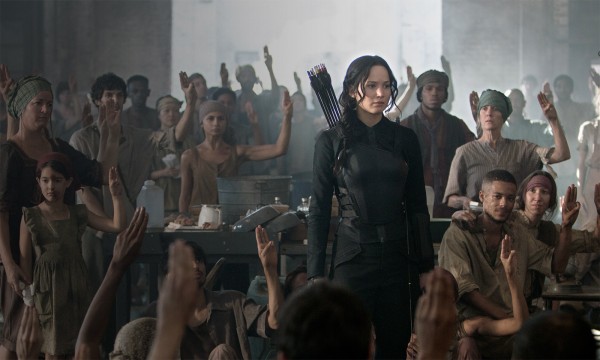 Things are not looking up for Katniss Everdeen (Jennifer Lawrence) in this third installment of Suzanne Collins‘ young adult book series ‘The Hunger Games‘. In an effort to squeeze as much money as they can, the movie studio decided to split the third and final book into two parts, much like the last two ‘Harry Potter‘ films and the recent trilogy of the single book of ‘The Hobbit‘. On one hand, the fans will get two movies. On the other hand, there will be a lot of filler between these two films to stretch them out to their two-hour run time.

Rest assured, ‘Mockingjay Part 1‘ is a dark movie. War has begun between the Capital, led by President Snow (Donald Sutherland) and the new resistance, led by President Alma Coin (Julianne Moore). Since the studio executives decided to split this third story into two films, this first part serves as a promo for all the action and excitement for the next film, which is unfortunate, because the last two films were quite good. ‘Mockingjay Part 1‘ is basically just a bunch of filler and setup for something bigger and greater. The pacing is much slower than the last two films and might have you yawning or checking your watch a few times throughout. 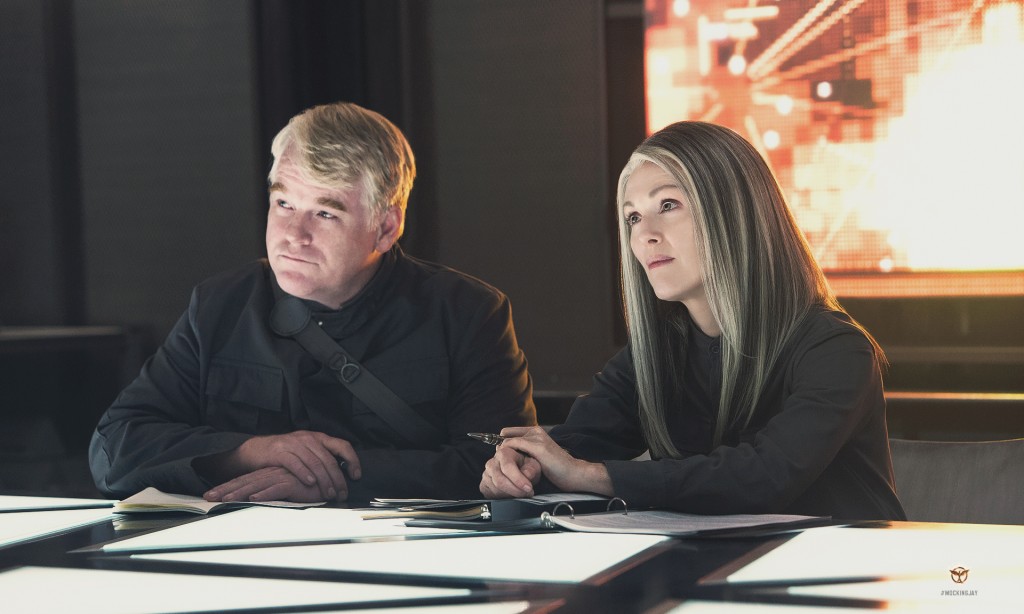 That being said, it’s still a decent enough movie with good performances, excellent visual effects, and good camera work. And it’s a must-see if you want to stay in the story line of this book series, but as a stand alone film, it doesn’t amount to much at all. It’s just a bummer, we all have to sit through this first part to get to the meat and potatoes of Part 2. I’m going to assume that you all have seen the first two films, but if not, I suggest you watch those and read our review HERE, before you proceed. ‘Mockingjay Part 1‘ starts off right where ‘Catching Fire‘ left off, with Katniss rescued from the last game, while Peeta (Josh Hutcherson) was kidnapped and taken to the Capital.

Katniss was rescued by the resistance with President Coin and Plutarch Heavensbee (Philip Seymour Hoffman) running the show. Their goal is to take down the evil Capital, by uniting all the people who are now basically slaves to the Capital and evil President Snow to rebel and regain their freedom. Their strategy is to use Katniss as a symbol of the Mockingjay to make a series of commercials to amp up the spirit of the people to rebel. So Katniss travels from section to section, where the Capital is bombed and killed thousands of people for treason. Katniss sees this destruction and either sings or cries into a speech. Her camera crew films, and the people back at the resistance broadcast it all over the world. This leads to a bunch of people standing up to the Capital.

Meanwhile, Peeta is sending video messages out to the people, telling the resistance and Katniss to stop this war and lay down their guns, but Peeta seems to be getting physically and mentally worse with each video. So what did we find out in ‘Part 1‘? That a big war is coming to a head and that Peeta and Katniss have some issues to work out. That’s about it. While this is definitely the most sinister and darker of the ‘Hunger Games‘ films so far, it is by far the slowest. At least the visual effects are all top notch and the one big action scene was quite good, but it was over before you could blink.

I’m sure this film will go well with ‘Part 2‘, but as of now, it’s just a sedated piece of filler that will prep us for the next big film. And if the filmmakers chose to end this installment five minutes earlier, with a big cliff hanger, instead of a fizzled out ending, the movie would have left a better taste in my mouth.