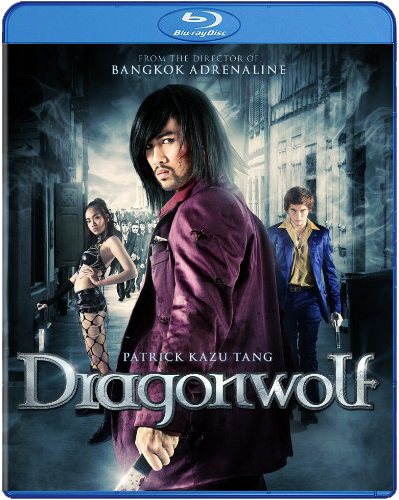 ‘Dragonwolf‘ is a typical martial arts film in a lot of ways. If you want something slightly entertaining with fight scenes, this will do nicely. If you’re hell-bent on seeing quality fights, pick up a Bruce Lee flick. Watching this made me so sad though, I really wanted to like this. The finished product doesn’t even deserve an entry to my ‘Eh’ category. You know what I mean, “Hey ‘Dragonwolf‘ is on, wanna watch it?” “Eh, why not?”

Meet the players. The lead of Mozart was given to Kazu Patrick Tang (‘Ong-bak 2‘) and Johan Kirsten is Julius, Mozart’s brother. Macha Polivka (‘Urban Cannibal’) is the ingenue Mary. The trio of actors don’t have a huge list of credits to their name which could explain the wooden acting. Writing and Directing are Raimund Huber (‘Freerunner‘) with Johan Kirsten as co-writer.

The film opens to Mozart as a young boy very sick and/or dying, his mother trades her soul to the local witch doctor for his health. The meet cute for the brothers begins when Julius is being bullied and Mozart defends him.  From there, the opening credits begin as an homage to graphic novel story telling watching him grow from a boy to an adult, the clip is washed in a brutal savagery. Adult Mozart single-handedly raids a drug-house, killing everyone that gets in his way, either with martial arts or a handgun that has an unending supply of bullets, He never reloads! One of my favorite scenes in this turd of a movie is when one of the baddies appears in a hallway with a grenade, he pulls the pin and throws it only to have it hit the ceiling and land at his feet. 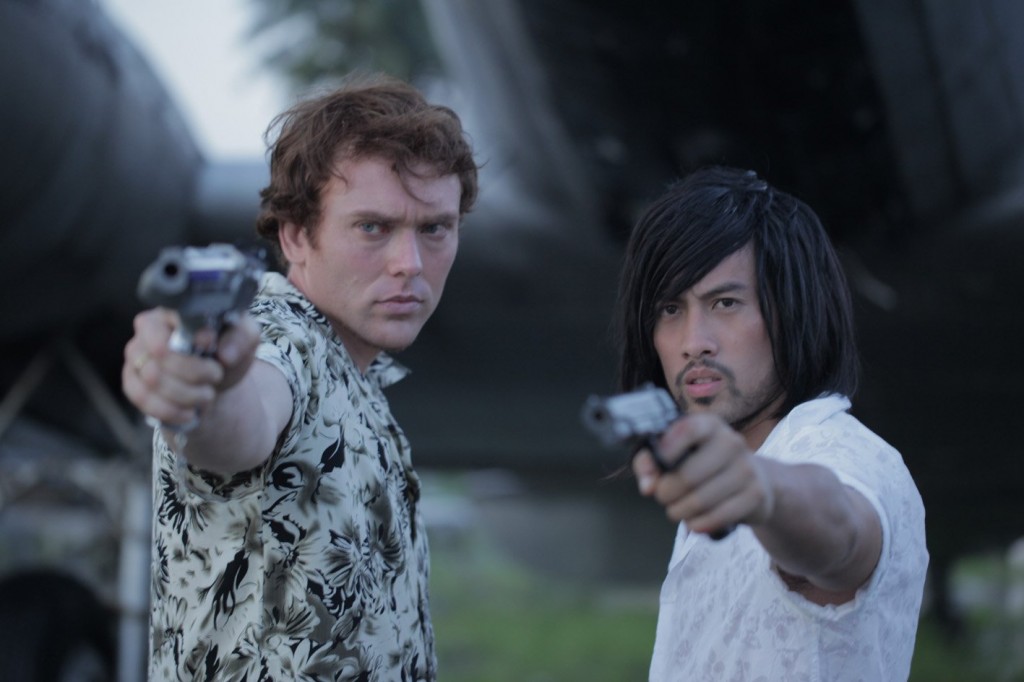 Mozart and Julius are called before their boss and the head of The Devil’s Cauldron neighborhood. He issues a warning to the two that they either handle the problems they have with each other, or he will bury and replace them. Most of the story is told in flashbacks, it doesn’t confusing, it’s just superfluous footage that doesn’t make or break the film. Julius surrounds himself with some lesser goons that make for a lot of incredibly ridiculous dialogue. One of the lesser cronies of Julius’ is almost responsible for some comedic relief, but his imitation of David Tennant as Barty Crouch, Jr. from ‘Harry Potter‘ was so distracting from the tone of the film. It was like a clown showing up in a cemetery, could be funny, but ultimately just ridiculous.

In flashbacks, we see the same woman in both Mozart and Julius’ lives. The same woman that is gunned down while she is in bed with Mozart. This is what runs the entire film is the love triangle between the brothers and Mary. Mozart goes to a strip club, where he makes his way to the inner sanctum where a poker game is in progress. The card sharks look as if they’ve seen a ghost. He plays the amnesia card well, which only increases their unease, he wants to send a message to Julius that he’s alive, then pulls out his sword.

During the give and take of the fights, there are some decent fight scenes, they all begin to look the same the more the film plays out, but it’s not terribly boring. The dialogue was dreadfully written and employed into the script even more poorly, the verbal diarrhea reminded me of ‘Gilmore Girls‘ or ‘Dawson’s Creek‘ where massive numbers of words per episode were the norm. There were a few characters in the film that seemed to stand out a bit more than others, one man from a trio of hired assassins wore a yellow suit and reminded me of Chris Tucker from ‘The Fifth Element’. While another goon that was a perfect mixture of Keanu Reeves’ shiny clothes from ‘The Matrix‘ and Rufio from ‘Hook‘. They didn’t expect a beautiful woman to become the undoing of them.

‘Dragonwolf’ is presented in 1.78:1 (widescreen) and has a good 1080p HD transfer, and a running time of 122 minutes.  The overall feel of the film was a lightly washed out sepia tone with muted colors through most of the film. Some of the flashback scenes were lightened up quite a bit giving an ethereal essence to those scenes with softer edges. Some of the darker sequences are too deep and don’t provide a lot of contrast to things like hair color or open doors. When looking at a scene with anything light set against a dark background creates halos that wrap around the lighted points 3-4 times. A few points in the film, in particular the initial meeting with Brutus has a green tinge to it. The camera seemed to be constantly in motion and during the fight scenes, there were weird perspective shifts, some of those shots are really well utilized and  gave the product a slightly artistic feel. The action scenes were nicely edited and the cinematography was not boring.

The audio aspects the disc offers is a lossless DTS- HD 5.1 mix and a Dolby Digital 2.0 stereo option. Opening titles featured a tech heavy beat with a lot of gunshots and explosive sounds. The soundtrack features music that leads to climax before defeating a foe. Over other scenes there is a light piano sound that juxtaposes the gritty video to the delicate piano track. The English voice-overs were absolutely horrendous. Not like old ‘Godzilla‘ movie bad, but close. The voices were not in sync, the delay wasn’t so much to destroy the film, but it definitely took it from a serious movie to a drinking game.

I can’t, in good conscience recommend this craptastic production to anyone. I watched it, which is one viewer more than it had any right to have. There was way too much going against this film, specifically the acting, voice overs and stupid characters, but if that describes your film of choice, knock yourself out. Seriously, knock yourself out, this film will do it slowly and draw it out over 2 hours. Ain’t nobody got time for dat!