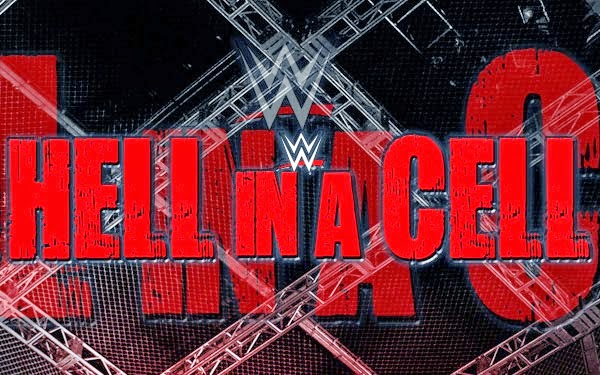 The superstars were set. The lights and fireworks were bright and loud. And a giant sixteen-ton cage of steel was sharp, fierce, and ready for the carnage that was to take place inside. WWE’s ‘Hell in a Cell‘ 2014 (the sixth event of this caliber, but 30 matches total) was a force to be reckoned with. Blood was shed, title belts were on the line, chairs were slammed, tables were broken, and special appearances were made to a sold out crowd in Dallas, Texas at the American Airlines Center. A famous Beatle put it simply, “The Long and Winding Road“, which is a great lyric that could be used to describe the past several months of WWE.

If you’ve paid attention to the news recently, you would know that WWE started its own television network (you can subscribe to it for $9.99). This price would include WWE’S entire catalogue of pay-per-views, new series, old series, and the new pay-per-views live. However, shortly after the debut of the network, people thought WWE was valued to high at the stock market and therefore valued it at a lower price, which led to WWE and CEO Vince McMahon losing quite a bit of money. This led to lay offs of staff and talent, both big and small, and the WWE Universe (us fans) have had to see some of our favorite superstars released from their contracts. This has steered the execs at WWE to use a smaller pool of talent each week, to which we’re seeing the same matches over and over.

But luckily for us, the talent they do have are excellent at what they do and continue to entertain and shock us. And that is exactly what ‘Hell in a Cell 2014‘ did. For those unfamiliar with what ‘Hell in a Cell‘ is, it’s basically that giant steel cage, which is lowered over the ring, where wrestlers go at it until one taps out or suffers a three count. Oh yah, there are no rules either, so chairs, tables, fire extinguishers, and even cement blocks are legal to use. Perhaps the most famous ‘Hell in a Cell‘ match was from 1998 where Mankind Mick Foley and The Undertaker entranced the world with their athletic ability in that in the first two minutes of that match, Undertaker choke-slammed Mankind off the top of the three story steel cage into the announce table. This happened again a few minutes later for a second time, which is finally when the match began and involved thumb tacks, chairs, tables, and barbwire. The main event of this 2014 ‘Hell in a Cell‘ mirrored that amazing night in 1998 where Dean Ambrose and Seth Rollins started out this match just like that and had similar effects. But more on that later. 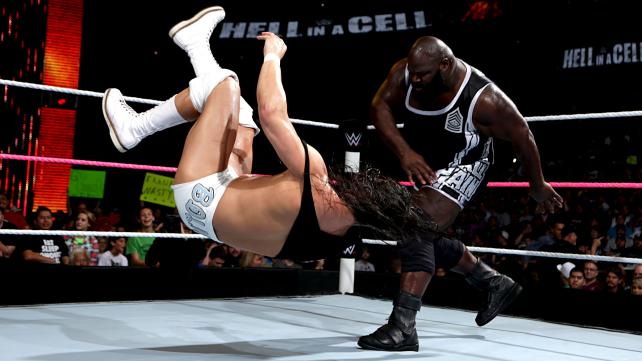 The night started out with Mark Henry (the strongest man in the world), and who is evidently a big cry baby when Russians beat him in the ring, fought Bo Dallas, who thought the city of Dallas was spreading disease to the rest of the world, so wanted to be called Bo Washington. It was cute. But Mark Henry who weighs one million pounds and Bo Dallas who weighs the same as my German Shepard dog is either slapped or power-slammed, the match is over. 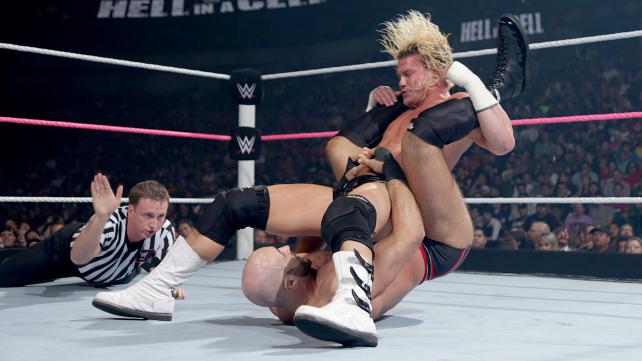 Then it was onto the Intercontinental Championship on the line. Dolph Ziggler was defending the title against Cesaro. Now in a real world fight, Cesaro would decapitate Ziggler in a matter of seconds using only a pair of tweezers, a paperclip, and a copy of Paul Heyman’s latest Blu-ray, but I digress. Hell, Cesaro power bombed The Big Show in the Andre the Giant 30 man Battle Royale recently, winning the match. This matchup consisted of the best 2 out of 3 falls, which the entire audience including ‘SIGN GUY‘ thought there would be three falls, but Ziggler used his magic and blonde highlights to win the match in two falls in row, thus keeping the belt. Cesaro then waddled himself out of the ring. 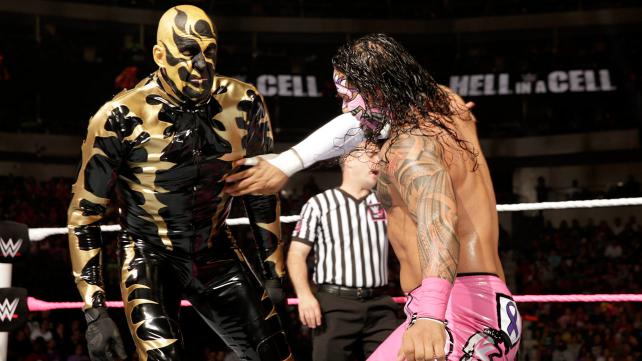 Perhaps the most entertaining and fun match of the night was Sheamus (yes, he’s actually from Ireland and still looking for his charms) vs. The Miz (MTV’s The Real World guy), who has Damien Sandow at his side as his stunt double. for the United States Championship. It’s funny that the Ginja Ninja from Ireland has the US Championship belt. But the focus isn’t on Sheamus at all. It’s on The Miz and his stunt double Sandow who now go by Mizdow. It was a decent match, but the spotlight was on Mizdow outside the ring the whole time as he mimicked every move The Miz executed in the ring including talking and losing the match. It is one of the funniest things we’ve seen in the WWE in a long time and is one of the best gimmicks they have going for them right now. Keep it up. 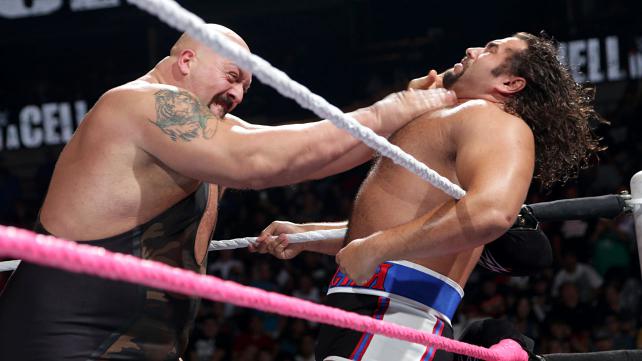 Now let’s talk about the Rusev vs. Big Show match. Rusev is what every Russian kid in the 80s wanted to be. A giant oiled up bad guy who hates Americans and loves the Soviet and their dirty martinis. As he is waving the Russian flag everywhere and posting pictures of President Putin on all the screens, he has managed to be undefeated basically. Maybe it’s the sheer homoeroticism of the Russian bad guys in their tights or maybe it’s because they are building Rusev for a much bigger match with the People’s champ – The Rock. Only time well tell, but long story short, Rusev beat the Big Show, Big Show cried like a little girl with a skinned knee and left the building. 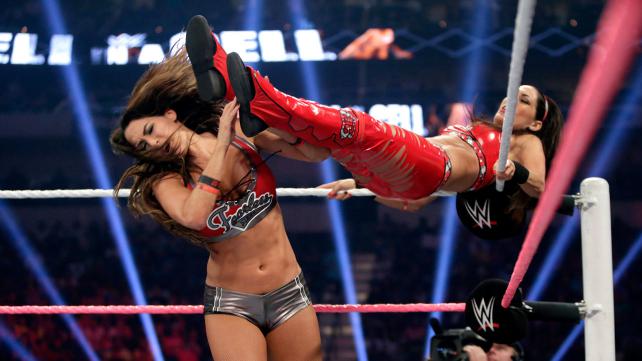 Moving on to the two diva match ups. First up was Nikki Bella vs. Brie Bella. Two sisters who have had a very rocky past with a stipulation that whoever won this match, became the slave…I mean personal assistant to the other for 30 days or quit the business. Side note – Brie Bella is married to Daniel Bryan, the former WWE Champion who is currently out for an injury. The match was done well and both women sold their moves, but it was over pretty quickly and of course the crowd favorite Brie lost and is now the personal assistant to her evil sister. Expect some silly antics in future episodes. 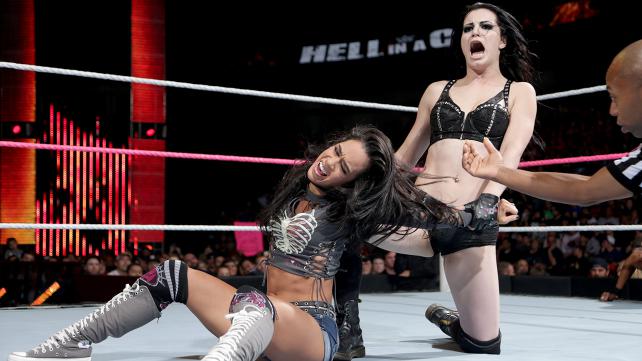 The second was AJ Lee vs. Paige (a British hottie) who has a temper. AJ is the crowd favorite here and is married to CM Punk, who quit the business several months ago, but the crowd still chants his name. AJ won the match, keeping her Diva championship. Both women did well, but it’s the same song and dance that has been going on for months now, jus like the above female matchup.

Now onto the two Hell in a Cell matches. First up was John Cena vs. Randy Orton with the stipulation that whoever won would go on to face Brock Lesnar (the current WWE Champ) at a future pay-per-view. Now over the years, we have seen Orton and Cena fight quite a bit, and this seemed like it was thrown together at the last minute, because WWE couldn’t get Brock Lesnar and his contract to have him at every pay-per-view. Orton should have won this fight, but alas, Cena scored the victory and now yet again, we will see a Cena and Lesnar fight, which I think I’m not the only one here saying this, but “BOOOOOOO…We don’t want to see this again.” Both stars did a good job in the ring, but it lagged a bit until Orton did his famous and now viral RKO on Cena. The match is perfectly choreographed due to Orton’s in ring ability to sell and execute. But Cena’s momentum lost steam quickly and thus the match was a misfire. 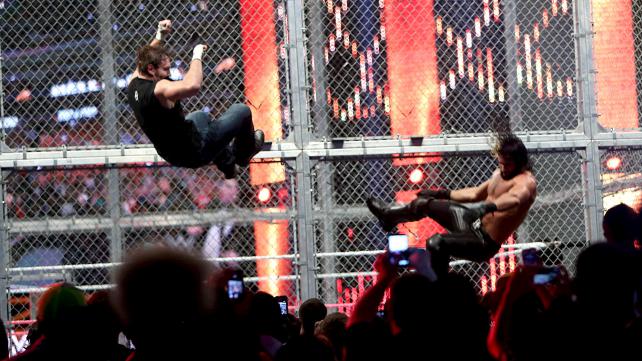 Now onto the main event was quite epic up until the very end. Dean Ambrose and Seth Rollins were brothers from another mother where they and Roman Reigns formed a faction called the Shield, in which they utterly destroyed everyone in their path. They rose to the top of the card very quickly over the past couple of years. But Rollins betrayed Ambrose and Reigns and joined the big bad faction of The Authority. This has sent Ambrose on a whirlwind of insanity, causing the fans to cheer him as the Lunatic Fringe, because of his crazy high flying and violent antics, some of which involve a hot dog vendor’s cart and ingredients. Meanwhile, Seth Rollins has cheated and ran away from every encounter since then, making him a big wet vagina. But it was with this Hell in a Cell match, that the two were finally going to fight – and that they did by climbing to the top of the steel cage and just like in 1998, people fell from the top of the cage into the announce tables before the match officially began, where Ambrose threw ten folding chairs into the ring to get things going. It was a very fun and action packed match with bones being broken and body parts being brusied, but then the American Airlines Center’s lights went out, a lamp appeared in the middle of the ring, smoke sizzled out from the ring carpet where a ominous voice speaking latin repeated a phrase over and over. One spotlight shined on the ring to reveal Bray Wyatt, who just knocked Dean Ambrose out cold, thus winning the match for Seth Rollins and starting a feud with Ambrose.

Needless to say, this was not expected and the crowd was not happy with this. Again, Rollins wins by cheating and running away and Ambrose is left in defeat and the storyline kaput for now. It was a weak ending to a very fun and highly entertaining pay-per-view. But one thing is for sure, the Lunatic Fringe will be even more insane in the coming weeks and the big bad Russian will have more people to deal with.