JLaw and Bradley Cooper’s Trailer For ‘Serena’ Has Dropped!!! 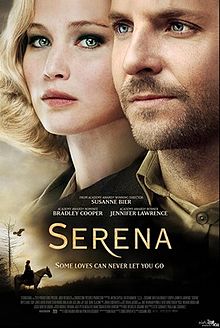 Today has been a hot day for trailer release and it’s not over yet. I’ve written in past months about the Ron Rash novel titled ‘Serena‘ that was getting a film treatment starring Jennifer Lawrence and Bradley Cooper. I’ve talked the book up to anyone with ears when I spied the opening. I’m officially on the JLaw bandwagon of love and knew she would be able to play the iron-willed, determined, steely leading role.

The source novel released in 2008 and set in the 1930’s telling the story of a couple that was pre-destined to be together in an all-consuming inferno that became their marriage. The young couple cut an enormous swath through the North Carolina timber industry leading them to the complications that come with power at any cost and their battles to retain that hold.

The book did not last me very long at all as I was totally unable to put it down. It was a gripping, intense read and I couldn’t help but keep reading to find out what happened next. The trailer looks promising, I just hope they didn’t entirely massacre the book as some adaptations tend to do. The flick heads to theaters on March 27, but on VOD a month before on February 26, 2015.