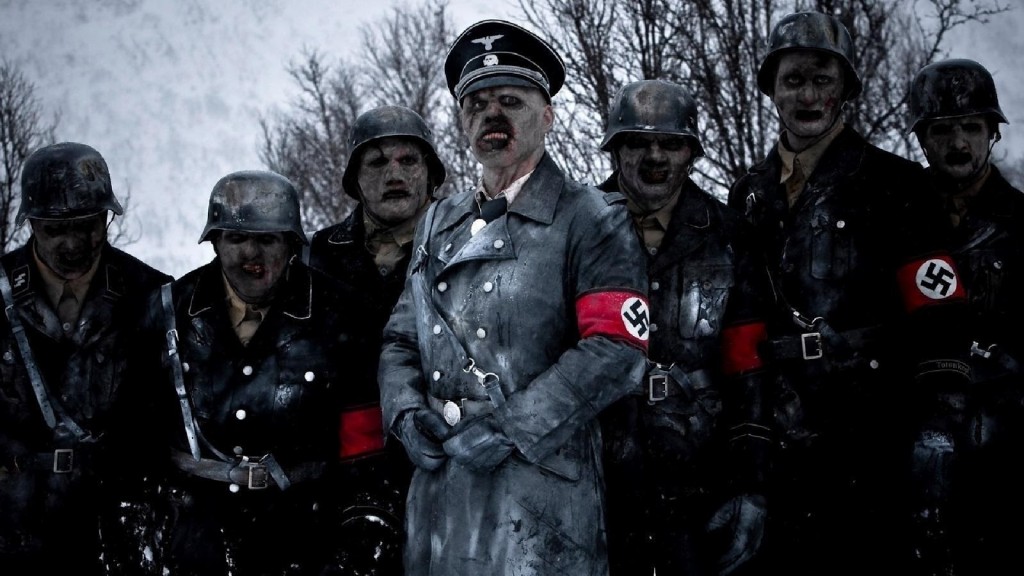 Some films are destined to become Oscar fodder. They are created, carefully crafted, to become instant nominees for the next award show. From the concept and design to the casting choices, nothing is left to chance. The same could be said for cult classics. Some films achieve cult status by being so horrendously awful that they circle around the giant, invisible wheel of crap back around to becoming great again. Still, other films seem as destined for cult status as those reaching for the awards. There is nothing stellar in these films. The acting won’t move you. The set designs often look like they were conceived on used McDonald’s napkins hours before the cameras start rolling. The concepts are the stuff of giving a teenager mountains of sugar, blindfolding them, spinning them around, and having them throw darts at a board full of random plot devices. Dead Snow 2 is such a film. You might think this to be a bad thing, but when such an endeavor is crafted with the same love and care as the Oscar contenders, something stupidly magical happens and cult status is achieved.

Dead Snow 2, sequel to the fan-favorite Dead Snow, begins where the first left off. Martin (Vegar Hoel), the film’s protagonist has survived and returned the cursed gold back to the Nazi-zombies from whom it was taken. Yes, you read that right. Nazis. Zombies. Nazi zombies. You can’t make this stuff up. But wait – it gets better. This gesture did not appease the zombies, and they continued their pursuit. In his escape, Martin and head zombie, General Herzog (Orjan Gamst) struggle as Martin attempts to drive away. The end result is a nasty car crash that leaves Martin unconscious. When he awakens in a hospital, he finds that the arm he had severed in the first film has been mistakenly replaced with Herzog’s severed arm and attached to Martin’s body. With his new supernatural arm, Martin discovers newfound supernatural powers and strength…and an appendage with unquenchable bloodlust. If that wasn’t bad enough, Martin also finds himself in the center of a murder investigation as news of the deaths of his companions has traveled from the isolated cabin to the neighboring town. On the run from the authorities, and trying to control an arm that only wants to bring death to all it encounters, he enlists the aid of a group of American zombie hunters to help him stop the zombie horde that approaches. Little does he know that his new allies may not be as advertised.

Dead Snow 2 does what any good sequel is supposed to do. It takes everything that was great about the first film and dials it up to eleven. Seemingly everything is improved. The gore is gorier. The blood is bloodier. The laughs are…laughier? Due to the success of the first film, the budget has been noticeably increased this time around. The violence is really more polished, but still maintains that over-the-top aspect that really resonated well with audiences in the first film. You will find yourself flinching at parts while simultaneously laughing at the absurdity of what you are seeing (So. Many. Intestines.). The film respects its roots and pays homage to the footsteps that came before. References, plot devices, and other clichés sprinkled throughout the film pay respects to classics in the horror comedy genre like Evil Dead and Shaun of the Dead. At first glance it might appear as blatant plagiarism, but as the film develops it becomes clear that it was done intentionally out of love. The characters are wonderfully developed. You find yourself laughing at the whole experience, while simultaneously hoping for their survival as the stakes get higher.

If there is any complaint to be found in this film, it is that it does take a little time to really develop. While the laughs and fun are there from the beginning, they are more like a muffled grunt of amusement rather than a heartfelt bellow. The first act of the film is not nearly as entertaining as the other two acts, which makes for a somewhat disjointed experience. Fans of the first film might feel a little thrown by this film as it dials down the horror aspect and replaces it with more comedy. Still, for most, this is a welcome relief as the first film seemed to struggle for identity. There is no struggle here. This film knows exactly what it is, which becomes its greatest asset.

This film is a must own for any zombie aficionado. Not since Shaun of the Dead has a zombie film offered as much pure fun as Dead Snow 2.

4 out of 5 Severed, possessed, zombified arms