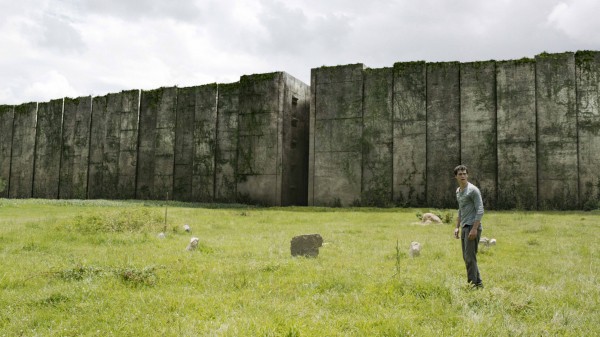 To end the summer and start the fall season, we have yet another Young Adult film adaptation from James Dashner’s book series called ‘The Maze- Runner‘. Like the young adult movies to come out before this one such as ‘The Giver‘, ‘Divergent‘, and even ‘The Hunger Games‘, it all takes place in the a futuristic society where Earth is mostly in ruins. And there is one person who might be able to set things straight and save a bunch people and bring peace. ‘The Maze-Runner‘ is no different when it comes to these plot points.

While ‘The Hunger Games‘ is still one of the better made and looking films of this caliber, ‘The Giver‘ and ‘Divergent‘ fall in the “less than thrilling category” if you get what I’m saying. Fortunately, director Wes Ball has conjured up a great cast of young adults and has shot a fast-paced action thriller that keeps us entertained and at times, on the edge of our seat. But with it’s fast pace, the character development of some of the supporting characters is left in the gutter. But it doesn’t seem to matter, because Ball has stylishly filmed the action scenes that we forget about any of the misgivings this movie has. 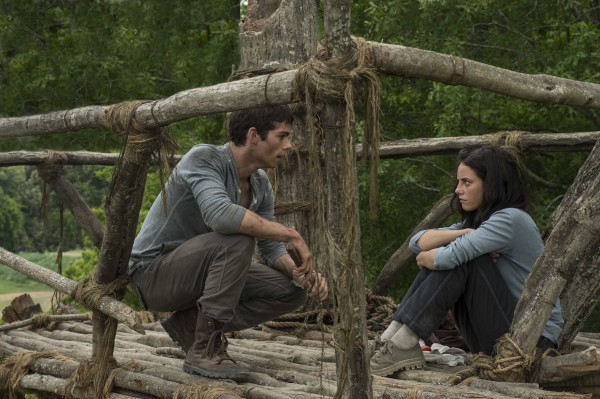 We open our eyes and see a teenage guy named Thomas (Dylan O’Brien) who awakens in a steel cage elevator and arrives in the Glade, which is in the center of The Maze. Thomas is greeted by dozens of other boys who have came up there before him along with much needed supplies. The Glade is a big open field surrounded by woods and meadows and is enclosed by a giant concrete wall, which at night changes itself so it’s a different Maze the next day. Alby (Aml Ameen) is the Glade’s first prisoner and has been there the longest, which is three years, who gives Thomas a crash course on what they know, which isn’t much because all of the boys seems to have some sort of amnesia where they can’t remember their past other than their names.

Alby and Newt (Thomas Brodie-Sangster) head up the leader faction of the Glade, while Gally (Will Poulter) leads up the security portion of it. Other factions include farming and food, and building weapons and shelter. Then there are the most respected faction amongst the boys – the runners. The runners leave each morning and run as far as they can through the Maze to map out an escape route or find out why they are there in the first place. However, they must be back before each night, because the walls change and the scary-as-hell Grievers come out, which are giant spider like creatures that are half organic and half robot (it’s scarier than it sounds).

Thomas is learning the tricks of the trade very quickly, which some like and some don’t – mainly Gally who is trying to keep things as they are and not wanting to upset the Maze. But when the arrival of the first girl ever comes up the elevator by the name of Teresa (Kaya Scodelario), things get tense quickly. Not only is she throwing off the balance and peace of the other guys, but her strange connection to Thomas makes the others think something bad is coming for them. But soon enough, Thomas leads a band of people through the Glade in order to find a real way out and maybe they’ll find out why they were put here in the first place.

The movie suffers a little bit from some of the cheesy dialogue from the co-stars. It could have been better if there was a little more backstory to the characters, but some of this comes off as rushed and therefor some of the dialogue doesn’t always work. What does work are the action scenes. They are top notch that will keep you on the edge of your seat. They are choreographed very well and keep the film’s pace moving along. And the actors here all turn in great performances that are very believable. ‘The Maze Runner‘ might not be your go-to young adult film, but it is definitely thrilling and highly entertaining with some decent reveals in the third act. After watching this first film, I’m definitely looking forward to the sequel.