Move over Dwayne ‘The Rock’ Johnson and move over John Cena, because WWE superstar Dean Ambrose (real name Jonathan Good) has signed a deal to star in an upcoming action movie called ‘Lockdown‘. This is the 2nd film out of a series of six that WWE Studios and Lionsgate will co-produce together. Stephen Reynolds will direct the film, which production starts later this month.

If you’re unfamiliar with Good or shall I say Ambrose, he made his debut on WWE’s main roster back in 2012 and helped form the faction of The Shield with Seth Rollins and Roman Reigns. All three Shield members have quickly rose to stardom and are currently at the top of their game in the WWE. And with WWE’s 2nd biggest pay-per-view of the year coming up this weekend, Summerslam, all three have big solo matches that are being hyped as some of the best matches of the year. Needless to say, the audience loves all three guys. 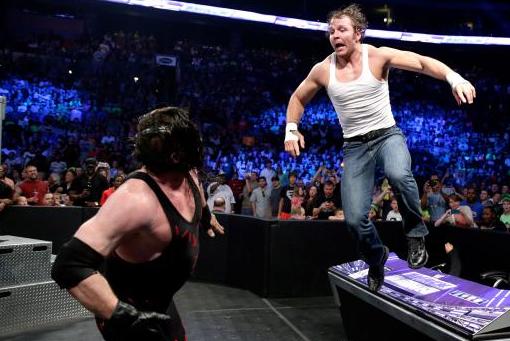 ‘Lockdown‘ is being written by Nathan Brooks and Bobby Lee Darby (‘See No Evil 2‘ with WWE Superstar Kane), and follows a police officer who finds himself trapped inside his own precinct and hunted after crooked cops are trying to recover evidence that will send them to prison. Sounds like a decent premise, and I’m sure Ambrose will play the part well, as he is crazy enough to play a man who will stop at nothing to bring people to justice according to Variety.

“Lockdown will continue to energize and excite with the high level of adrenaline our fans have come to expect from our films,” said WWE Studios president Michael Luisi. WWE and Lionsgate also have ‘Vendetta‘, which start WWE Superstar The Big Show and the reboot of the horror film ‘Leprechaun‘, which also stars Hornswaggle, a WWE star.

I’m interested in seeing what other films WWE has up their sleeves, but with this information, I can expect Ambrose to be missing in action in the WWE ring for a couple of months.