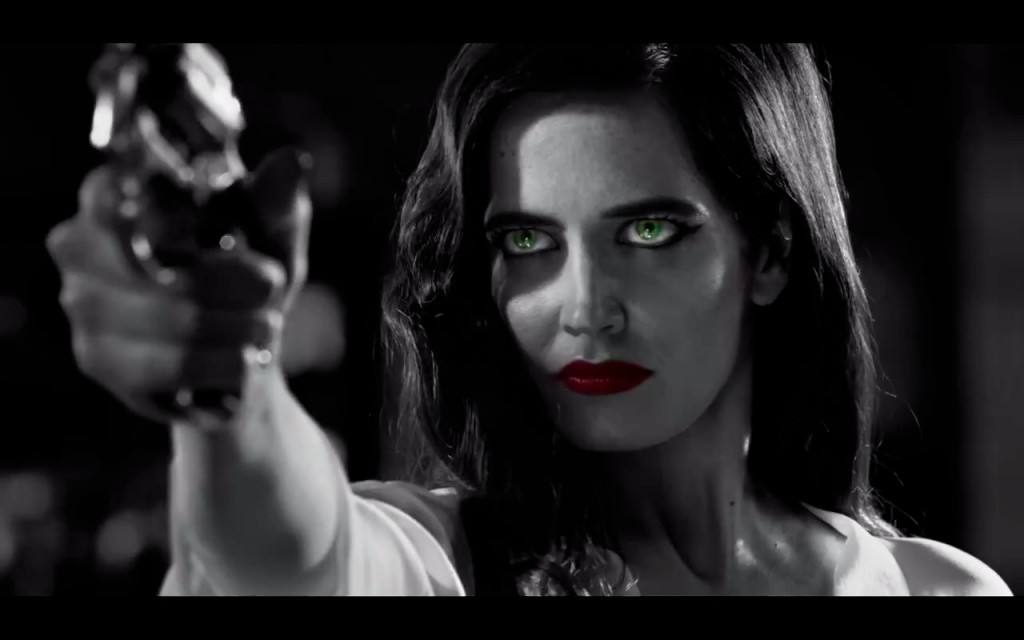 Second verse, same as the first. It’s been almost ten years since Robert Rodriguez and Frank Miller brought us the noir-soaked graphic novels known to comic book fans around the world as ‘Sin City‘, which was created by Miller himself. This seedy, ultra violent, and nasty underworld, where crime is rampant and the bad guys end up on top of this booze drenched and drug induced city is the backdrop for some of the most entertaining characters in ever to come out of a graphic novel.

Much like the first film, this second outing spins a web of a few stories that all meet together at some point or another with returning characters and a few new ones, which still captures the true essence of the 1920’s noir genre. The last film made almost $160 million, which is an excellent feat, considering the hardcore R rating due to the extreme violence, language, and nudity in these films, but also for it’s impressive camerawork and cinematography, which director Robert Rodriguez plays three roles here again, which is director, editor, and cinematographer. 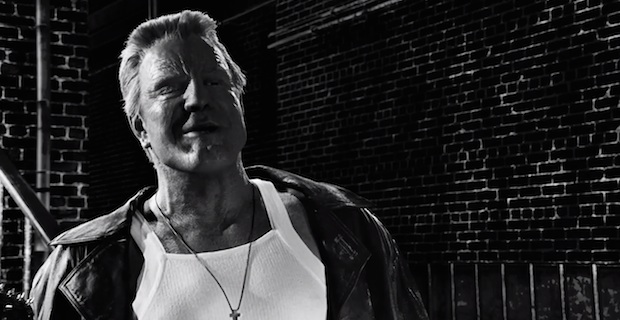 Rodriguez uses the green screen here 100% with his actors, and uses a great technology that builds this city and props around them, while coating the image in a gritty black and white color scheme, while accenting certain mood colors, such as blues, greens, yellows, and the ever violent yet lovely color of red. You’ll recognize right off the bat a large and tough man known as Marv (Mickey Rourke), who spends his days and evenings at the local rowdy saloon known as Kadies, where the beautiful exotic dancer Nancy (Jessica Alba) is making her money and still trying to get over the fact that the only man she ever loved, Hartigan (Bruce Willis), sacrificed his life for hers, in order to keep her safe from the truly evil political senator of Sin City known as Roark (Powers Boothe). But it’s great to still see that Marv is beating the bloody hell out of thugs and corrupt cops as much as he drinks. But our first story really starts with newcomer Johnny (Joseph Gordon-Levitt), a young hotshot gambler who never loses. He walks into Kadies, win

s some money, woo’s the local dancer Marcy (Julia Garner), and somehow eases his way in to the back room poker game with Senator Roark and his cronies. With his impressive poker skills and Marcy’s beauty, Johnny empties Roark’s poker winnings completely, but Johnny being the arrogant son-of-a-bitch that he is, he calls out Rourke in front of his men, which sets this story in motion and Johnny’s life in danger. But let’s move onto the main storyline of the film, which receives the title, ‘A Dame To Kill For‘. This story was in fact my favorite portion of Frank Miller’s series of books set in ‘Sin City‘, and is the perfect breed of evil, betrayal, and sex that brews the best of the noir genre. 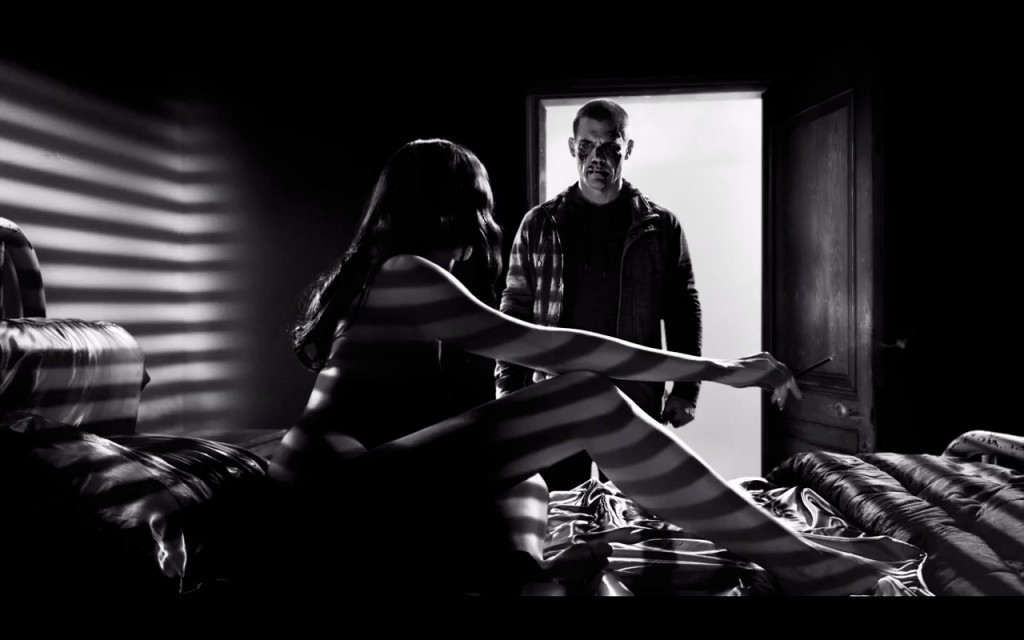 This story has to do with a succubus and black widow of a woman named Ava (Eva Green, PERFECT), who is so beautiful and seductive that no man on Earth could resist her temptation or charm. One of these men is Dwight (Josh Brolin, previously played by Clive Owen in the last film), who had a relationship with Ava that ended very badly several years prior. After the breakup, Dwight picked himself back up, got sober, and constantly reminds himself, he will never succumb to her calling. But this being Sin City and all, anything is possible and you can find anything in the back alleys of Sin City. That’s when Ava calls up Dwight again, and like a puppy dog lovesick over their master, he runs to her when she calls. Not only does she ignite Dwight’s loins again, but she also goes after a married cop (Christopher Meloni), and leaves her own husband (Marton Csokas) out to dry.

It’s with Green’s performance that she is truly the best noir actress to ever grace the screen. Her beauty and sex appeal is off the charts, but when she turns on the violent side, you feel yourself get stung by her sharp needle, which will quickly kill you, but still leave you wanting more. It’s a perfectly told story in the vein and style of the 1920’s noir films. Other notable aspects of the film are the cameos by Jeremy Piven and the intense fight scene with Marv and Manute (Dennis Haysbert, originally played in the first film by Michael Clarke Duncan). Every hit, bone crunch, face smash, and gun fire packs a powerful punch, which might leave you looking at your own arms to see if you have any bruises. Possibly my favorite cameo came from Christopher Lloyd, who plays, well a mad scientist doctor. I feel like they could have made a movie about him alone. 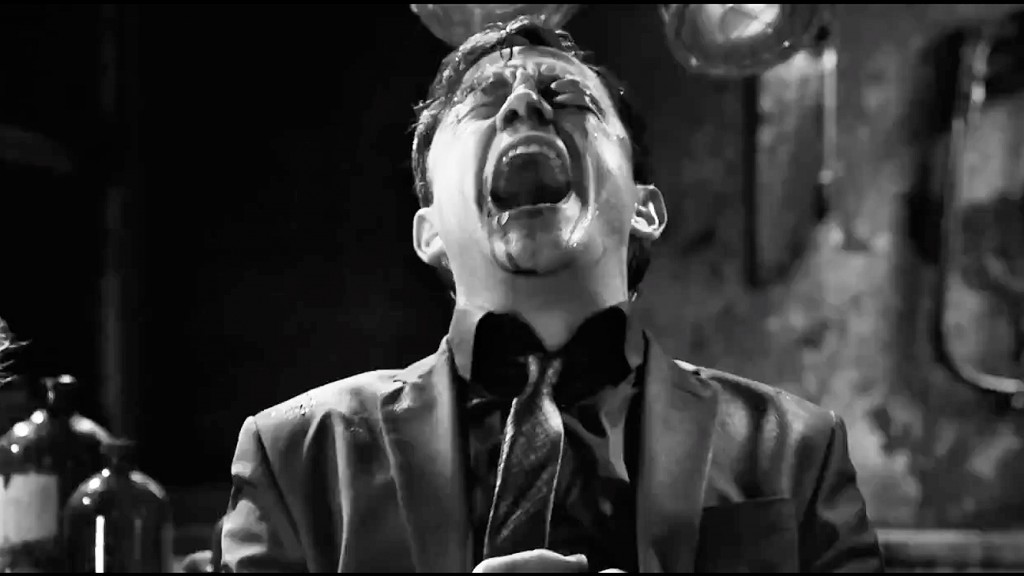 ‘Sin City 2: A Dame to Kill For‘ is more or less the same outing as the first film, with the same kind of characters, violence, and humor. But it’s Eva Green that guides you through this dark and twisted world and leaves you satisfied once you emerge clean on the other side.