‘Community‘. Yup, I’m going to throw in my two cents with the announcement that Yahoo has decided to prolong the show’s inevitable demise by giving it a location transplant. If network TV chooses to axe a program, there is still the chance that an online company can jump in with CPR and revive it. Yahoo has been wanting to share the success that Netflix, Amazon and Hulu have all enjoyed. Yahoo and Sony Pictures Television will stream a 13-episode sixth season of the ensemble comedy. Dan Harmon is carrying the flag as showrunner, once again. “I am very pleased that Community will be returning for its predestined sixth season on Yahoo,” Harmon said in a release announcing the deal. “I look forward to bringing our beloved NBC sitcom to a larger audience by moving it online. I vow to dominate our new competition. Rest easy, Big Bang Theory. Look out, Bang Bus!” 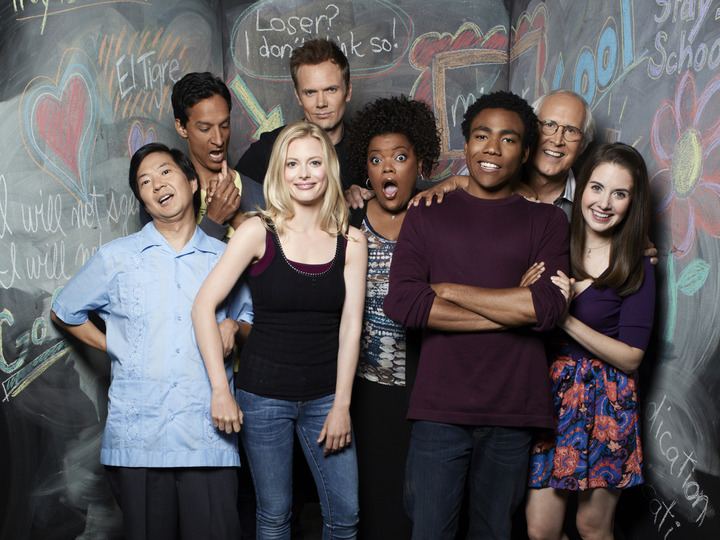 After ‘Community‘ was canceled by NBC in May, Yahoo was able to seal the deal that Hulu tried, and failed, to do. Where Hulu didn’t want to loosen their purse-strings enough, Yahoo is eager to land a show that has all the work done for them, including finding a fan-base, so money didn’t seem to be much of a factor. This is also how I believe the NY Yankees have prepped their bench for years…yes, I’m a Red Sox girl, but that’s for another discussion. Yahoo is not going to have any trouble financially to support any direction Harmon wants to take the show. Chris McKenna is also in talks to return as executive producer, sometimes writer and Harmon’s right hand. Universal Television, who is owned by NBCUniversal, had a bird’s eye view of the discussion and will remain as co-producer on the show. Sony will remain lead studio in day-to-day production of the series.

Yahoo has not only given new life to the doomed series, but has given a small sliver of hope that the #SixSeasonsAndAMovie is still possible. We know there will be a sixth season, but no official word on the movie at this time. Joel McHale (‘Ted‘, ‘The Big Year‘) shared his thoughts on the new platform: “Thank you, Sony. Thank you, Yahoo. Thank you, Dan Harmon,” the actor said. “And thank you to the greatest f%$#ing fans in the history of the human race. It’s the internet. We can swear now.”

Sony programming chiefs Zack Van Amburg and Jamie Erlicht, as they have in the past with many shows on their roster, continued to explore all options to keep the show alive. (The studio has developed something of a rep for not accepting network cancellations as final verdicts, having previously resurrected  several network favorites. Van Amburg said the studio was glad to have “avoided the Darkest Timeline yet again” with ‘Community‘, while Erlicht noted, “You can’t get to six seasons and a movie without a sixth season.”

Yahoo chief Marissa Mayer has been looking for the right fit to stake it’s claim in the first-run programming gig and ‘Community’s homeless state made the perfect match. Mayer is hoping she can lure advertisers deeper into the Yahoo web of media. Yahoo has an excellent jumping off point with picking up the series and can spend time developing original material. Yahoo chief marketing officer Kathy Savitt said that Yahoo “is all about connecting the best creators to the audiences who love their work. ‘Community’ has an incredibly passionate and loyal fan base who have fought hard to keep this amazing show alive.”

My thoughts on ‘Community‘ is that it was a great concept with awesome actors. Chevy Chase remains my favorite for the show and the reason I watched in the first place.  I can’t discount Ken Jeong’s contribution to my enjoyment of the show, either. That guy is crazy. Crazy-funny and crazy-he-might-kill-someone. Anytime I hear the name ‘Winger’, I don’t picture Joel McHale, I picture Bill Murray in 1981’s ‘Stripes’. Alas, I think this is going beyond jumping-the-shark, this show is like a beached whale. Someone needs to shoo away the on-lookers and drag it back to the ocean.