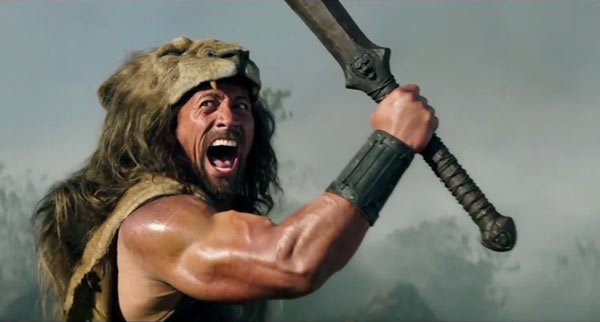 I know what you’re thinking…another Hercules film?  The Greek myth of the legendary son of Zeus and a mortal woman, Alcmene.  Brett Ratner’s Hercules is a different kind of animal.  At first, Hercules opens a lot like The Scorpion King.  A nephew of Hercules (Dwayne Johnson), Iolaus (Reece Ritchie), is bound and about to be killed.  Iolaus tells his would be murderers tales of the victories of Hercules.  Enter Hercules through heavy plumes of smoke, which is quite close to Mathayus emerging from the soot of the fireplace in The Scorpion King.

Unlike its predecessors of Hercules, Hercules is supported by his trusted team of mercenaries.  Whereas Hercules is a loner in the other films, like the TV show, Hercules: The Legendary Journeys, this Hercules has:  Iolaus, Amphiaraus (Ian McShane), Autolycus (Rufus Sewell), Tydeus (Aksel Hennie), and Atalanta (Ingrid Bolsø Berdal).  They are a team and the sense of family is clear.  The brilliance of McShane and Sewell in this film must be praised.  Amphiaraus is a seer who knows the moment he will die.  This prophecy becomes moments of levity when his time comes and goes.  McShane has a sarcastic wit that comes out with precise and effective timing, as was the case in Death Race and Snow White and The Huntsman.   Sewell is just on it when it came to bringing Autolycus to life.  His presence even in a supporting role is commanding.  A Knight’s Tale, Bless the Child, and Tristan and Isolde are prime examples of his ability to nearly steal the show.

This portrayal of Hercules’ human side is a more realistic take on the myth.  However, Ratner does not fail to present Johnson as a godlike figure though.  Johnson is already known for his strength and agility, which makes him a great fit for this mythological icon.  We see a little more of his original greatness as an action hero which was somewhat diminished by some of his recent comedic features.  A word of gratitude to the costume designer as well, I do not think Johnson has ever looked THIS hot.

Although this movie was excellently produced, there were a few spots where the dialogue delivery was weak and poorly timed.  Also, John Hurt’s role as Lord Cotys was not one of his best.  I’ve seen him bring out the essence of his characters in the Hellboy and Harry Potter movies.  Joseph Fiennes’ performance as King Eurystheus was a little more believable, but he faltered towards the end.  This was a complete shock as I have see Fiennes in many films:  Shakespeare in Love, Elizabeth, even the TV shows Camelot and American Horror Story and have never been skeptical of his interpretation of a character.

The cinematography is excellent and leads you through the story.  Interestingly another scene is somewhat modeled like a film I have previously viewed.  When Hercules is facing Rhesus’ army and one soldier is screaming at him, Troy comes to mind when Achilles is facing the Thracean rebels.  With one blow and an arrowhead, Hercules takes down their champion just as Achilles did with one stab and his sword.  It was even similar to Riddick’s fight against prison guard in The Chronicles of Riddick with a teacup.  You have to love it when the strong doesn’t rely on their immeasurable power and choses to use a small object or quick move to slay their enemy.  Anyway, the battle is epic and it is really cool how they “mow the lawn.”  When you see the film you’ll know what I mean.  Lastly, in this age of many films claiming to be 3D, the IMAX version certainly captures his amazing feats with engaging 3D action throughout the film.  It is worth the extra money to see Hercules in this medium.  To say that I vastly enjoyed this movie is understatement.  Hercules is truly a spectacle for the eye.