Film Review: Guardians of the Galaxy’!! 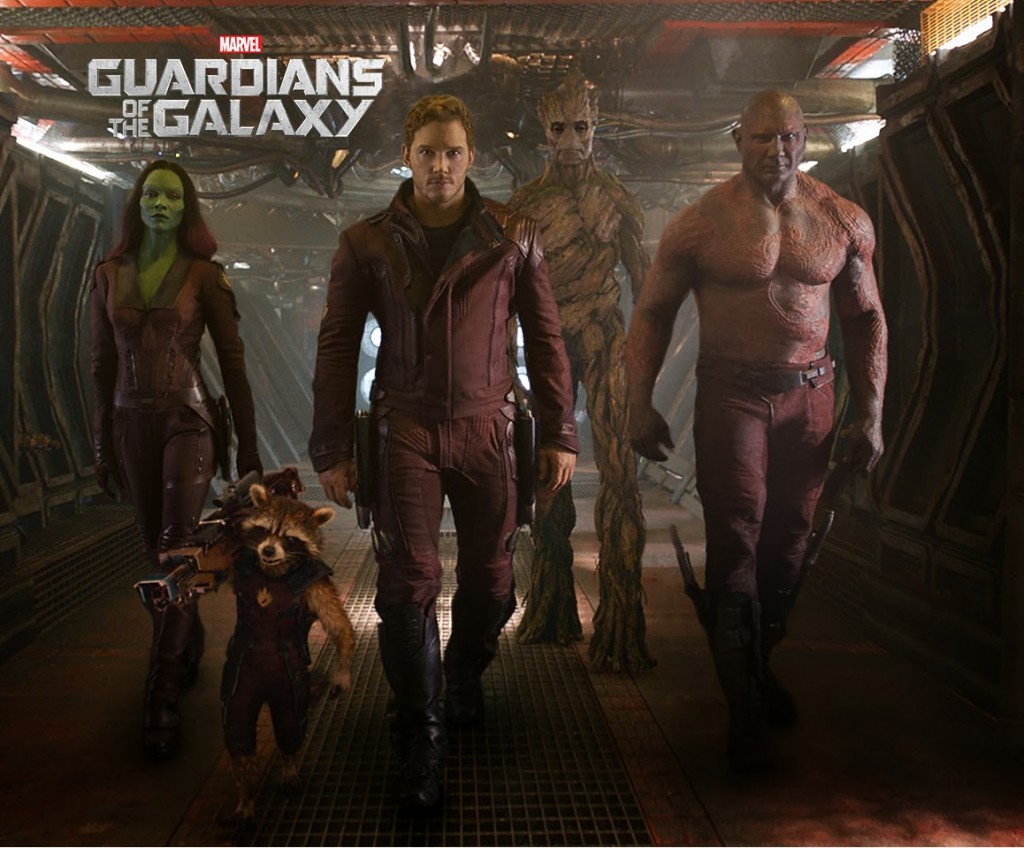 Since Marvel became their own movie studio back in 2008 with the first ‘Iron Man‘ movie, they have quickly become one of the most lucrative movie studios in Hollywood in less than ten years. With films like ‘Iron Man‘, ‘Thor‘, ‘Captain America‘, ‘Hulk‘, and the billion dollar blockbuster ‘The Avengers‘, you can see why so many people stand in line for hours on end to see the top visual effects, greatest actors, and the fun and thrilling story lines for their favorite superheroes. And of course we all know that Marvel is now famous for connecting each of their films with cameos of heroes from other movies and those exciting end credit sequences after each of their films.

It seems like Marvel has a formula in motion that combines critically acclaimed performances and effects with box office success, which is a rare feat these days. Then along comes a movie based on the Marvel Comics called ‘Guardians of the Galaxy‘, which I’m sure most of you never read or heard of before this movie started being made. Marvel Studios decided to go a different route with this film and gamble on the “not-so-big-names” and a different kind of script and story than it’s previous flicks. Not since ‘The Avengers‘ has there been this amount of visual effects or a big super-hero team like this one, and Marvel is betting big that it makes ‘Avengers‘ type money in the long run. And I’m here to say that ‘Guardians of the Galaxy‘ is my favorite Marvel movie to date, and I’m betting it will make the big box office splash that Hollywood so desperately needs this summer. Yes, it really is that good. 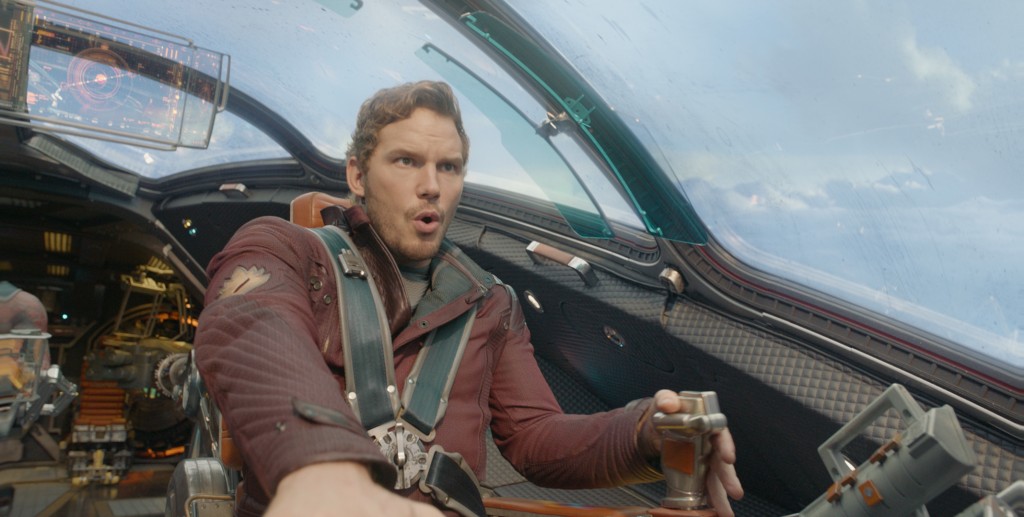 If you are unfamiliar with the story of ‘Guardians of the Galaxy‘, they were first introduced back in 1969 in Marvel Comics, but it was a different team than you see on screen and in comics today. No, not until 2008, did the new team appear in comics, which is what this new film is based on and writer/director James Gunn knocked it out of the ballpark. Gunn got his start with the infamous movie group ‘Troma‘, but then went on to write a great superhero indie film called ‘The Specials‘ (HIGHLY RECOMMENDED), then went on to write the remake of ‘Dawn of the Dead‘ in 2004, followed by directing ‘Slither‘, ‘Super‘, ‘PG Porn‘, and now ‘Guardians of the Galaxy‘. Needless to say, it’s an odd choice by Marvel, but none-the-less the perfect choice.

‘Guardians of the Galaxy‘ is about a rag-tag group of people (some aliens from other planets and one human), who decide to team up and fight evil across the galaxy. The team is lead by a human named Peter Quill who calls himself Star Lord (Chris Pratt), who spends his time working for an intergalactic thief Yondu (Michael Rooker), stealing objects of great value from different planets and selling them for a hearty bounty. Little does he know that one of the objects in his possession is sought after by the evil Thanos (Josh Brolin) and Ronan (Lee Pace), who plan on using the object to kill off entire planets. When a beautiful alien named Gamora (Zoe Saldana) tries to take the stolen object from Quill, they run into Rocket (Bradley Cooper) and Groot (Vin Diesel), a raccoon that has been modified to walk, talk, shoot guns, and has a pension of danger, and a magical tree that can grow to any size and be a huge asset in a fight. 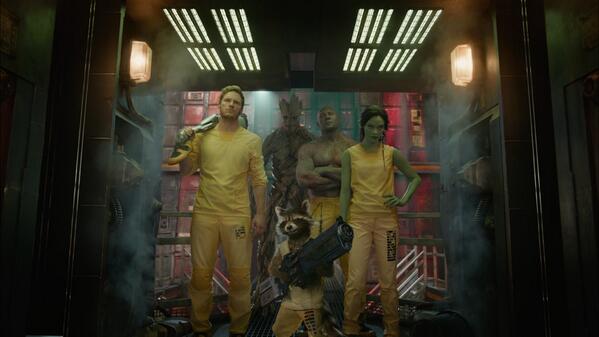 The four of them are arrested and taken to prison where the meet Drax The Destoryer (WWE’s Dave Bautista), where he informs them that he is after Ronan for killing his family. The five new “friends” all seem to have the same goal in common and escape prison to head out to stop Ronan, while figuring out that by sticking together, they can fight evil and save innocent lives. Gunn’s script is truly satisfying, as he has enough time to dive into each character’s psyche and make them vulnerable. This makes us take the journey and care about each character throughout. His unique humor in the script has perfect timing and is very different and more adult for a Marvel movie, which should satisfy a lot of people. Look out for the Jackson Pollock joke.

And the visual effects are stunning. From the huge spaceship battles on different planets to the excellent practical makeup effects on the aliens, they all look flawless. Rocket the Raccoon and Groot look amazing and fluid and make Gollum from ‘Lord of the Rings‘ look like chicken scratch. James Gunn did not disappoint with a $170 million dollar budget film. Chris Pratt just owns this film too and is the next big action star. His sincerity and humor are solid gold and you root for him every step of the way. You believe he is just a regular fun guy, but when he has to fight, you believe that he can indeed kick some serious ass. Zoe Saldana does and impressive job here too, as she always does. Dave Bautista does a magnificent job as the hulk of a species who is hell bent on revenge and takes everything literally, which plays to great comic effect through his delivery.  Bradley Cooper and Vin Diesel’s voice work is amazing as Rocket and Groot with Lee Pace coming in nicely as the villain. 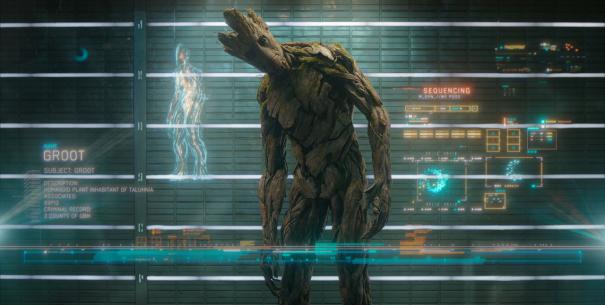 Cameos from John C. Reilly, Djimon Hounsou, Glenn Close, and Benicio Del Toro are all excellent and am sure will have bigger parts in the next films. During the Benicio Del Toro scene, keep a look out for other heroes. Tyler Bates’s score and the abundance of 80s and 90s rock music is superb here and might be the best soundtrack I have heard from a movie in a long time. You’ll find yourself singing and swaying in your movie seats, and to end the film with a Jackson Five song is pure brilliance. Again, ‘Guardians of the Galaxy‘ is my favorite and dare I say it, Best Marvel movie to date. This is a MUST-SEE!