‘Doctor Horrible’s Sing-Along Blog’ Is Gearing Up For A Sequel!! 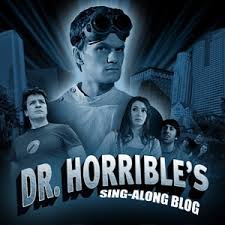 If you don’t know who Dr. Horrible is, I’m going to assume you have been living under a rock, on Mars, or in a cave with no sunlight and/or internet access. ‘Dr. Horrible’s Sing-Along Blog‘ is a comedy, tragedy, musical….a comtragical? I like that. I officially coin ‘comtragical’ TM pending. The story in 3 separate acts stars gorgeous voices and wonderful voices from Neil Patrick Harris, Nathan Fillion and Felicia Day. 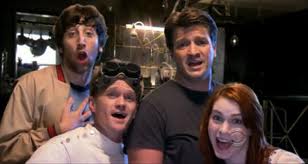 What is now a piece of geek/pop culture history began during a writer’s strike in 2008. With production halted in Hollywood, the Whedon brothers, Joss, Jed and Zack came up with the storyline and songs. Nathan Fillion loved working with Joss Whedon so much in Firefly that when Fillion saw Whedon’s name show up on his caller ID, he answered the phone with “Yes.” Whatever it was that Joss Whedon asked him to be in, his answer was automatically yes. We, the fans are ever so grateful that he agreed to do it!

This show was different in the fact that it was intended to only be a 40 something minute web show. No talk of sequels, no need to be picked up for series order. This was a stand-alone escape from reality in a brilliant way. The entire premise and filming of ‘Dr. Horrible’s Sing-Along Blog‘ sent a message to big Hollywood. Their constant input AND their multi-millions of dollars were not needed to make something super successful. This also gave Joss Whedon his very first Emmy win. Strangely he won the Emmy for a show that did not ever air on regular tv.

Fans have hoped for years for another installment and we have definitely discussed this before on the site, which you can check out HERE. Looks like we might be getting closer to that promised land. From the mouth of songwriter Jed Whedon, now working on ‘Marvel’s Agents of S.H.I.E.L.D.‘ He writes “We know we have spoken publicly about a sequel in the near distance and our passion to create it, and I promise we have not been insincere. Horrible is still one of our favorite creations by humans who were also us. We have many songs written and the plot outlined, but needless to say, we’ve been busy. Joss has had a hectic couple of years and is in the middle of the busiest year of his life, as is Zack and as are we. Also the actors have other things they’re acting in, I think. So the future is uncertain, our passion remains. DH2 will exist, in some format or another, at some point in the future. Unfortunately, the when is still unclear.” 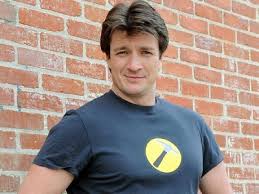 The story is of a wannabe villain Dr. Horrible, his arch-nemesis Captain Hammer, and their shared love interest Penny, was over the top, hilarious and altogether wonderful. The songs, which are still on my iPod as my kids request them constantly, are catchy and something you will find yourself humming days after hearing them.

If you’re unfamiliar with the comtragical (I really think it’s working!), you have plenty of time to look it up, watch it, memorize it and love it. Honestly, watch it. It is like taking the best parts of the geek world, the originality, fantastic songs, superheroes, and the turkey leg from a renaissance festival, dropping parts of all into a petri dish with some Whedon fertilization and the resulting baby is ‘Doctor Horrible’s Sing-Along Blog‘!

I’m clearly getting way too excited about this coming to fruition. I just hope we don’t have to wait a few more years for this one, but if we do, I have plenty to occupy myself with. Did I mention that it’s the same Joss Whedon that is ultra busy with ‘Avengers 2‘? If you did not realize that from his name, you really need immersion into the world of geek as soon as possible. I suggest watching ‘Firefly‘, ‘Buffy‘, ‘Avengers‘,  and ‘Dollhouse‘. You will be another person on the other side of viewing these, and you will thank me. I like pink stargazer lilies.