Film Review: ‘Metallica Through The Never’!!! 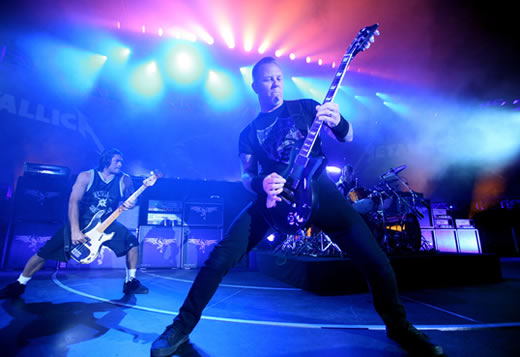 Metallica: Through the Never announces itself as an explosive, visceral experience from the very first scene: an overhead helicopter shot of the city, riding high over a thoroughfare that leads us to the stadium, coming down to ground level, glimpsing a fan or two, then following a young skater kid down to the depths of the arena where he begins an unforgettable night as roadie for the band. This sequence is so chock-full of filmmaking prowess that one instantly realizes we’re in for a ride of visual delights. The film lives up to that opening sequence and then some.

Director Nimrod Antal (Vacancy, Predators) utilizes the IMAX 3-D experience wisely and fully, not by creating silly comin’-at-ya moments, but by taking the audience on stage, up close to the band so that we get a full sense of the intensity of the performances and the hardcore commitment with which they attack every song. The band rarely faces one another, instead opting to engage the audience, who reciprocates by banging their heads worshipfully throughout the concert. There are the usual Metallica on-stage shenanigans: the giant Justice statue that is built during the concert only to come crashing down in a faked catastrophe, a giant Tesla coil and electric chair shooting off arcs of electricity, giant crosses rising from the stage in copious amounts of dry-ice fog. If it seems I’ve used the word “giant” a lot here it’s because everything about Metallica’s stage show is larger than life. They don’t do anything in half-measures, from their infamous pyrotechnics to their heart-pounding renditions of fan favorites. These guys are all-in and it’s their goal to get you off on the sheer power of the music.

The concert footage is interspersed with a narrative film involving Trip, the young roadie we meet at the beginning of the film. Played by up-and-comer Dane DeHaan, Trip is a skinny, outcast kid who seems new at his job as roadie, a bit overwhelmed, and timid. He’s sent on a mission, which is essentially just a McGuffin to get him out in the streets where it appears the world has turned into some kind of post-apocalyptic hell. There are epic battles of cops v. anarchists, a terrifying masked horseman, and a particularly effective, eerie scene where scores of bodies hang from electrical wires above the city streets, quietly and gently blowing in the night breeze. Unfortunately, all this anarchy has no point. Trip’s adventure includes popping a pill right before driving, setting himself on fire, and other ill-advised moments that account for the film’s R rating. The “narrative” sequences (there isn’t much narrative, folks, trust me) is really just an elaborate music video, an excuse for whoa-wow-did-you-see-that-badassery. The effects are stellar but it would have been nice if it all had a purpose or a pay off.

Perhaps the only take-away can be found in juxtaposing the kid with the band: he’s shy, alone, and powerless in a mad world. Then there is the music: empowering, angry, driving, pushing, winning. One can see how a kid like that would fall in love with this band and “ride the lightning” to that natural high where the music and you become one. Suddenly YOU are empowered with the might of heavy metal.

So, maybe the narrative makes a point, after all.

In spite of all the stage tricks and the anarchic mayhem of the narrative, the real gem here is the concert footage itself. 24 cameras were used with swooping crane shots and close-ups that allow you to see every bulging vein, every drop of sweat, the intensity, the energy, and the mastery of the musicians, as well as the all-out reverie they elicit from fans.

Metallica: Through the Never in IMAX 3-D is better than a front-row seat. It’s an on-stage experience with the band.

After the dust settles and the credits roll, there is an incredible rendition of the rarely-performed “Orion.” No stage tricks, no audience, just the band alone, facing one another, making music together. It’s the only intimate moment in the film, and well worth sticking around for.