Find Out What Fernando Thought of ‘Despicable Me 2’!!! 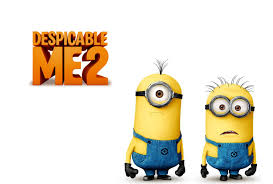 ‘Despicable Me‘, the 2010 film, was an amazing story about a villain slowly learning to have a heart. Three years later, we get a sequel, which is unfortunately little more than an attempt to make more money on what was a wonderful original idea.

This time around, we return to see the new adventure of Gru, voiced by Steve Carell, which consists mostly of him flirting with romance through the introduction of a new secret agent played by Kristen Wigg.  Benjamin Bratt and Ken Jeong also lend their voices to this film to, surprise surprise, stereotypical Mexican and Asian characters, respectively.

Carell is still charming as Gru, but the script is short on humor and completely lacks the emotional strength of the first film.  The original reminded us of how much feeling a cartoon can have.  The stars of the first film, the three little girls ultimately adopted by Gru, are pretty much just side characters here.  The film totally misses the opportunity to develop the parental bond previously emphasized. 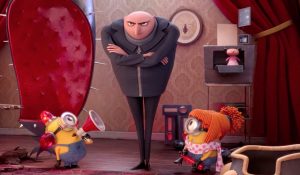 Not all is lost though.  Thankfully, WE HAVE MINIONS!!!  Minions are amazing and totally steal the show.  Those cute little yellow creatures are all over the place, proving that good humored innocent slapstick can still bring uproars of laughter.

I guess it’s just a bit disappointing to see a sequel totally miss the mark that its predecessor made, especially when you are in a theater full of children and laughs are still relatively scarce throughout.  But whenever the minions came on, adults and children alike flooded the theater with cackles!  It’s still pretty good family entertainment, and although it was slightly disappointing, perhaps one day we’ll see ‘Despicable Me 3: Wrath of the Minions‘.  Now that would be something to see.