‘The Terminator’ Reboot Is Happening and Will Unleash Summer of 2015!!! 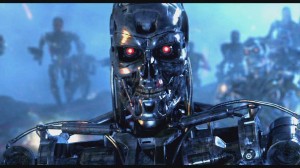 Well, the deal has finally been made. Skynet will go live in 2015 and send Terminators to kill us all.  I kid. I kid. But, Paramount has finally greenlit a trilogy of new rebooted ‘Terminator‘ films, with the first movie releasing June 26th, 2015. That’s two summers away. Megan Ellison, who is the daughter of a multi billionaire, got into the film producing business three years ago and has a pretty successful track record already. She purchased the rights to ‘Terminator‘ in 2011 for over $20 million and now has a three picture deal.

Looks like Arnold will return as ‘The Terminator‘ again, but this time as the lead. I know James Cameron is busy with his ‘Avatar‘ sequels, but he really needs to be involved with these new films. The last two were less than stellar. Please get a good filmmaker to conjure a good film, because these movies are just explosions and guns. They are much more than that. Below is the press release. Tell us what you think.

The first in a stand-alone trilogy, “TERMINATOR” will be produced by Megan Ellison of Annapurna and David Ellison of Skydance. Dana Goldberg and Paul Schwake of Skydance will serve as executive producers. Laeta Kalorgridis (“Avatar,” “Shutter Island”) and Patrick Lussier (“Drive Angry”) are attached to write the screenplay.

Launched in 1984 with star Arnold Schwarzenegger as the title character, “TERMINATOR” spanned 3 subsequent films, which have earned over $1 billion at the worldwide box office.

David Ellison most recently executive produced, along with his partners at Paramount, “World War Z,” “Star Trek Into Darkness,” “G.I. Joe: Retaliation” and “Mission: Impossible – Ghost Protocol”. A 5th installment of in the “Mission: Impossible” franchise is in active development, along with a 3rd film in the “G.I. Joe” franchise, among other films.