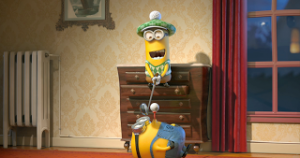 It’s going to be difficult box office wise for ‘Despicable Me 2‘ to beat its predecessor, which made over $543 million just three years ago. The directors and writers are back again with Steve Carrell as the whacky former criminal mastermind Gru who we saw last time stealing the moon. How can one top that? This fun sequel may lack the heart and soul of the first film, but is still highly entertaining for both kids and adults with its amazing animated visuals, laughs, great voice cast, and those likable minions.

A small amount of time has passed since the first film as we see Gru happily living his new life, free of any villain activity. Sure, he still has his weapons, but he uses them more now to get rid of annoying neighbors who are constantly wanting to set him up with their single girlfriends. Gru is still taking care of his three adopted daughters, Margo (Miranda Cosgrove), Edith (Dana Gaier), and the cute small Agnes (Elsie Fisher). He is in the midst of a BBQ birthday party for Agnes when he is summoned and kidnapped by the AVL (Anti-Villain League) to help find a new dastardly criminal that has stolen a top secret research lab by way of a giant flying magnet. 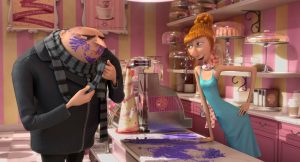 Gru is paired off with the incredible new AVL recruit Lucy Wilde (Kirsten Wiig) as they are told to set up an undercover operation in a fancy mall at a frilly cupcake shop. Their intel says that the villain is also undercover in the mall and that the two will have to find out who the mystery villain is before the world meets its impending doom. Gru quickly suspects the boisterous Eduardo Perez (Benjamin Bratt), who is the owner of a wild Mexican food restaurant, but strikingly resembles the evil villain El Macho, who was thought to have died a long time ago by riding a shark with tons of explosives into an active volcano (Take note SyFy Network).

These types of situations make the new installment a bit more bonkers than the first film, but the creative team makes it work, even if it seems to be more about the action and adventure, more than telling a story here. It was nice to see Gru’s daughters help him out in the dating scene, which is this film’s side-story. There were a few laugh-out-loud moments when Gru went on his blind-date. And those lovable minions are back in full force this time, which you can’t help but laugh at them. 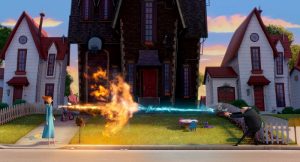 Carrell and Wiig do stellar jobs here lending their voices to make these characters truly come alive. But, the real star of the show is Benjamin Bratt as El Macho. Al Pacino was once signed on to play this part, but dropped out for creative differences. I’m so glad this happened as Bratt just owned this voice role. Russell Brand returns as Dr. Nefario and does a solid job with Steve Coogan and Ken Jeong having minor, but hilarious roles as well.

‘Despicable Me 2‘ is quite enjoyable, despite it’s lack to pull you in emotionally like the first film did. It’s packed with laughs, amazing visuals, and great voice work. The minions are amped up to 11 this time around and perform a few music numbers, which will certainly make you laugh out loud. And don’t forget to stay through the credits, as our little yellow minions hold auditions.