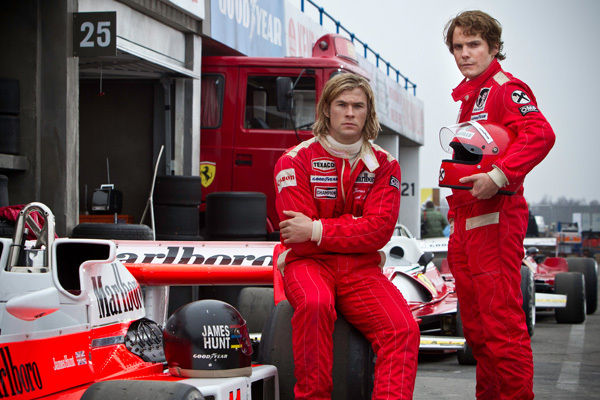 Ron Howard’s new movie is called ‘Rush‘ and is a Formula One racing drama that follows the rivalry between James Hunt and Niki Lauda in the 70s. Chris ‘Thor’ Hemsworth and Daniel ‘Inglorious Basterds’ Bruhl will star as the drivers. The film will release September 27th from Universal Pictures. I must say, it looks damn good. It’s been fun following Ron Howard on his social networks, seeing production videos and photos.

Official Synopsis:  Chris Hemsworth and Daniel Bruhl star as legendary Formula One drivers James Hunt and Niki Lauda respectively in this biographical drama set during the 1970s, at the peak of their heated rivalry. Both on the track and off, Hunt (Hemsworth) and Lauda (Bruhl) couldn’t have been more different. Yet as much as Englishman Hunt’s showy public persona clashed with Lauda’s reputation for tightly-controlled perfectionism, both men remained bound together by one undeniable fact — they were both among the best drivers ever to grace the racetrack. When a horrific crash during the 1976 Grand Prix at the Nürburgring nearly claims Lauda’s life, however, a grudging respect begins to develop between the two racers as Hunt realizes just how devoted his greatest adversary is to the sport they both love. Olivia Wilde and Alexandra Maria Lara co-star in a film directed by Academy Award-winner Ron Howard, and penned by Peter Morgan (Frost/Nixon, Hereafter).