Here is Fernando’s Movie Review of ‘The Bling Ring’!! 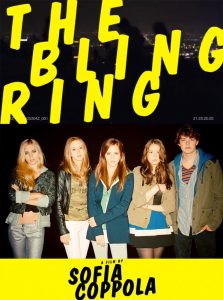 Sofia Coppola’s interpretation of the real life events of a bunch of nobody kids stealing a bunch of expensive stuff from a bunch of nobody celebrities.  Then they got caught, got on the news a bit, got a story in Vanity Fair, and were pretty much back to being forgettable again until Coppola made her movie.

And, despite everything I just said, it’s a good flick, though not great.  She does have an amazing knack for capturing the idiocy of today’s pop culture, and that was the whole point of this film.  Emma Watson in particular shines as a self indulgent little bitch that wants to be glorified for being a nobody, and she particularly hits this out of the park in her well developed monologues.

Here’s the thing though, I saw this movie one time about the media’s fascination with violence, Oliver Stone’s “Natural Born Killers.”  This is like that movie, only PG-13, and instead of a titillating topic, it’s more like a giant E News on crack.  And yes, you do get to love the idiot kids committing crimes against the needlessly rich who are so self assured with their place in the world that they don’t even lock their homes, but you don’t get the full vibe of routing for the bad guy.

It’s a great anecdotal film, but it’s as close to a mental stimulation popcorn flick as is possible.  Perhaps my favorite part was during the credits, when an ultra trendy girl in the audience said, “but I want to know what happened to them after all this!!!”  You can’t write better irony than that.