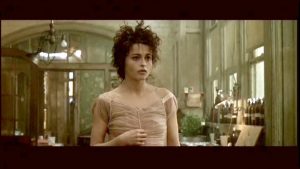 Taking a different role than her usual affair of villains and wacky personas, Helena Bonham Carter will play the fairy godmother in Kenneth Branagh’s live-action version of Disney’s ‘Cinderella‘. Cate Blanchett has already been cast as the wicked stepmother and Lily James (‘Wrath of the Titans‘) will play Cinderella.

Richard Madden (Robb Stark from ‘Game of Thrones‘) is set to play the prince while Sophie McShera (‘Downton Abbey‘) and Holliday Granger (‘The Borgias‘) will play the stepsisters, according to THR.  In Branagh’s version, the godmother will have much more screen time than the original animated feature and will disguise herself as a peasant beggar who watches over Cinderella, before she fully reveals who she truly is.

It will be nice to see Carter play this role, which is a complete 180 from her previous Disney film ‘Alice in Wonderland‘, where she played the evil Red Queen. Now that Carter is attached, I expect Johnny Depp or Tim Burton to add something somewhere. And now that they are remaking all of these old animated Disney films, let’s make a live-action ‘Lion King‘, because why not.