Win Tickets to see ‘Archer’ Live At The Verizon Theatre!!! 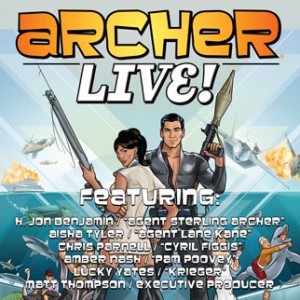 Good news, ‘Archer‘ fans. I have six tickets to give away for ‘Archer’ Live at the Verizon Theatre in Grand Prairie on Saturday, June 22nd. This is going to be an amazing show full of thrills, chills, and lots of laughs. H. Jon Benjamin, Aisha Tyler, Chris Parnell, Amber Nash, Lucky Yates, and Matt Thompson will all be there in person. What a night to remember.

To win tickets, send me an email at boomstickcomics@gmail.com with subject line “Archer Live’ or post a comment below on your most favorite episode of ‘Archer’ and why. Most creative answers will win and I will notify the winners via email in 24 hours. Winners will receive two tickets to the event. Best to all of you.

Archer Live!, featuring the all-star cast and producers of FX’s hit original animated comedy series, is coming to Verizon Theatre at Grand Prairie on Saturday, June 22nd. Tickets on sale now at AXS.com, charge by phone, 888-929-7849, or at the Verizon Theatre Box Office.  Archer Live! is a must-see for every fan of Archer which premiered its fourth season in January on FX.

Archer Live! features a moderated discussion, a live reading of classic scenes from the Emmy® Award-nominated series, and an audience Q&A with the all-star cast where fans will have a chance to get the inside scoop on their favorite show. Talent appearances include H. Jon Benjamin as Agent Sterling Archer, Aisha Tyler as Agent Lana Kane, Jessica Walter as Malory Archer, Chris Parnell as Cyril Figgis, Amber Nash as Pam Poovey, Lucky Yates as Krieger, series creator/executive producer Adam Reed as Agent Ray Gillette and executive producer Matt Thompson. Schedule and talent participation is subject to change.

Archer is an animated, half-hour comedy that revolves around the International Secret Intelligence Service (ISIS) and the lives of its employees. Although their work of espionage, reconnaissance missions, wiretapping and undercover surveillance is daunting and dangerous, every covert operation and global crisis is actually just another excuse for the ISIS staff to undermine, sabotage and betray each other for personal gain.

Thanks everyone for your emails. There were some really funny ones.  All Winners have been notified!  If you didn’t win this time, stay tuned, for we have some upcoming cool contests with prizes ranging from free movie tickets to free blurays and dvds.  Thanks for playing.

2 thoughts on “Win Tickets to see ‘Archer’ Live At The Verizon Theatre!!!”