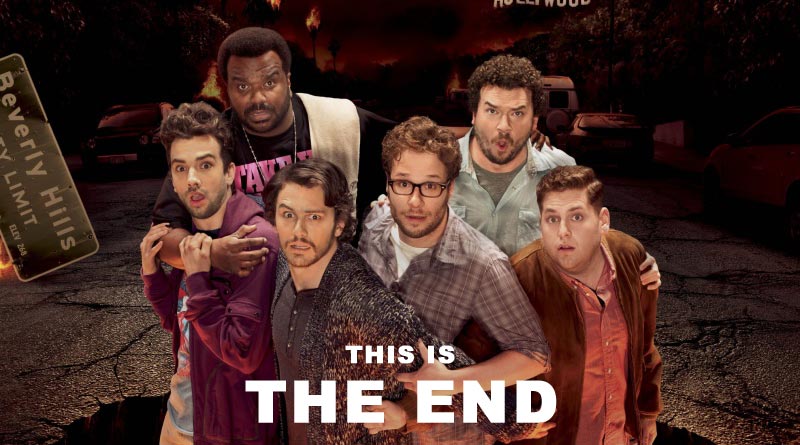 Car crashes, explosions, decapitations, exorcisms, the apocalypse, and tons of dick jokes make up Evan Goldberg and Seth Rogen’s ‘This is the End‘. And I can say that it’s the most fun I’ve had at the movies in ten years. In this dark comedy, we have the entire Apatow clan plus many more cameos of our favorite comedians who all play themselves as they take on the end of days. It’s genuine, gut-bustingly funny, sick, crude, and self-deprecating, which all results in the likes of a twisted reality show, complete with solo interviews with a camera scattered throughout the movie. I anticipate a large opening weekend with a long lasting power after ‘Man of Steel‘ releases later this week.

‘This is the End‘ takes it cues from a short film that Goldberg and Rogen made called ‘Jay and Seth Versus the Apocalypse‘ that had virtually the same cast, but was never released publicly. It only had a two minute trailer and was very low-budget. However this time around, there is a mega budget, the cast has more to work with, and the visual effects are on a grand scale. Our two main focus points are Rogen and Jay Baruchel as Baruchel flys into Los Angeles to visit his long time Canadian friend, Rogen for the week. Out of the entire Apatow cast of actors, Baruchel still resides in Canada and has a serious disdain for the life in L.A.

We get a funny glimpse of the lives of young, successful actors in Hollywood, complete with all of the drugs, booze, and jokes to go with it. The affair takes place at James Franco’s brand new home that he designed himself, as he is a man of many talents. His home is fit for a king and overlooks the Hollywood sign and is a block or two away from a shopping center. The first segment is packed with hilarious discussions and songs from this all-star comedy cast including Mindy Kaling, Michael Cera, Rihanna, Emma Watson, Jason Segel, and Christopher Mintz Plasse. At one point we see Cera getting serviced by two girls at the same time, all the while Baruchel is less than thrilled to be there.

As Rogen and Baruchel walk across the street to grab a pack of smokes and a snack, all hell breaks loose…literally. There are explosions, fires, large holes in the ground opening up, cars crashing into people and buildings, and beams of light shooting out of the sky and lifting people up. All of Los Angeles is engulfed in flames and many of Franco’s guests are killed or swallowed up by the giant holes. After the initial apocalyptic impact, only a few survivors are left inside Franco’s mansion including Franco, Rogen, Baruchel, Jonah Hill, and Craig Robinson. After they regroup, the go through their food, water, and weapons, which seems to be only a baseball bat and a prop gun from the movie ‘Flyboys’. 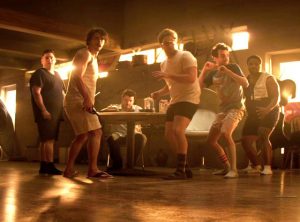 After their first night, they are awakened by Danny McBride, who wasn’t invited to Franco’s party, but ended up passing out his his bathtub, to him using most of their rationed food to cook breakfast, completely unaware of what happened the night before. Soon after that, Emma Watson shows up to take refuge inside of Franco’s house, but she quickly would rather leave after overhearing the guys talking about a non-existent “rapey” vibe. Now left with nothing liquid to drink, tensions run high and things get serious. Mcbride turns into a horrible houseguest who is ultimately voted to leave the house after successfully taking more rations than he should, whereas the rest of the group is trying to come to terms with what has happened and how to survive, or at least get into heaven. The results are nothing short of a highly entertaining, yet perverse thrill ride.

A lot of the film seems to have a healthy dose of improv between the actors, mostly dealing with certain parts of the anatomy along with drugs and sex. There are a few moments where we get their take on religion and how worthy of being saved they are, which offers a little hindsight into the Hollywood elite and how they think. The film takes a couple of twists and turns into a demonic possession film, followed by a monster movie. It all works if you don’t take it seriously. 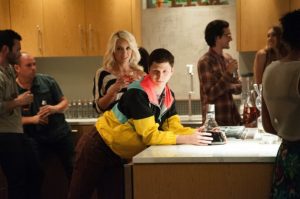 Everyone here turns in solid gold performances and does what they do best, which is provide great comedy. You’ll be laughing from start to finish, even if some of the jokes are far-fetched and straight out disgusting. ‘This is the End’ is no doubt one of the year’s funniest films so far and it will be difficult to top what Rogen and Goldberg have delivered. I can’t wait to see this again.